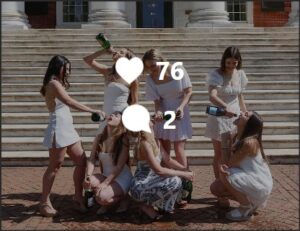 Yesterday I criticized Virginia’s colleges and universities for nurturing campus cultures that turn students into snowflakes unprepared for the adversity of the modern-day workplace and life as adults. A big contributor to the snowflake phenomenon is what psychologist Jonathan Haidt calls “safetyism” — protecting students from the risks of undergoing a bad experience.

Reporting on the Hazing Misconduct Report, yesterday’s Cavalier Daily described two cases of safetyism in which the university referred the Women’s Club Gymnastics and the University Guide Service student groups to the University Judiciary Committee for adjudication.

The kind of hazing that most people think of as requiring suppression usually results in wandering around stoned and naked, passing out blind drunk, or jumping out of windows. Everyone agrees that such outcomes are to be discouraged. But how bad is the following?

On Sept. 16, according to the bill of particulars, the Women’s Club Gymnastics instructed initiates to arrive at an event location precisely at 9:16 p.m… “without information on the nature or purpose of the gathering.” (Gasp!) They were divided into groups by colors: blue, yellow, pink and orange. (Ew. Bad taste.) Then they were instructed to do “wall sits” until they succeeded in making a current club member laugh. The consequence of failure to induce laughter led to taking “a shot of alcohol or water.”

New members were instructed to do one-handed cartwheels with a jello shot in the hand, and to complete certain tasks such as singing, dancing, and “finding large sticks.”

Are you kidding me? That’s it? What’s the offense here? Wearing tacky colors? Singing? Dancing? Finding large sticks? Trying to make people laugh? Being given a choice of drinking a shot of alcohol or water? The only thing that remotely approaches being dangerous is doing a one-handed cartwheel while holding a shot. But remember, this is a friggin’ gymnastics club!

Not to be outdone, the University Guide Service engaged in the following horrific activities over the fall of 2022

“Probies” were told to remix a popular song and perform on the steps of the Rotunda. During performances they were “yelled at” by older Guides. (Yelled at?That’s abusive!)

Worse, probies were taken by car to undisclosed locations off-grounds and not told where they were being taken, resulting in “fear and anxiety around safety.” (In my day, we called such abductions magical mystery tours.)

Even worse, probies were required to stand for the duration of the Big Guiding, even when they were not actively giving the tour!!!! (Told to stand? What’s next, waterboarding?)

More horrifying yet, probies were subjected to a “probie scare” event in which they were provided a fake syllabus that included the statement, “Probie does not equal Guide” that was bolded and underlined, accompanied by statements that the bottom 15% of the probie class would be required to repeat the probie semester. Then the initiates were quizzed on the fake syllabus with questions crafted to be so difficult that they could not reasonably know the answers!!!! When the probies turned the quiz over, they were informed that the exercise was a joke. (Kept in suspense for how long — an hour? Barbarically cruel!)

Finally, probies were told to “wear an embarrassing costume at a high profile location.” (My god, have they no decency?)

OK, the Student Guides did engage in one activity that might could maybe, if overdone, lead to an undesirable outcome. A current member (Big Guide) attempted to “ice” probies, which entailed chugging a Smirnoff Ice. The Big Guides also provided alcohol to underage probies on multiple occasions.

I don’t condone under-age drinking. But how many drugs are consumed and how much alcohol is swilled without the slightest intervention by the university administration? Why are these groups being singled out for what is undoubtedly common behavior?

I have my issues with the Student Guides, who routinely present negative portrayals of Thomas Jefferson and the University of Virginia during their guided tours, thus turning off tourists, prospective students, and other visitors. They do the university a huge dis-service. But I cannot get exercised about their hijinks.

The safety Nazis have totally lost sight that hazing serves a positive purpose. It is a bonding experience. It reinforces group cohesion. UVa administrators are all atwitter about how to increase students’ sense of “belonging” at the university. One way to do that is to let young people be young people, join student groups, and undergo the bonding experience of mild to moderate hazing. Banning initiation ceremonies undermines the sense of belonging. The new puritans are the enemies of belonging.