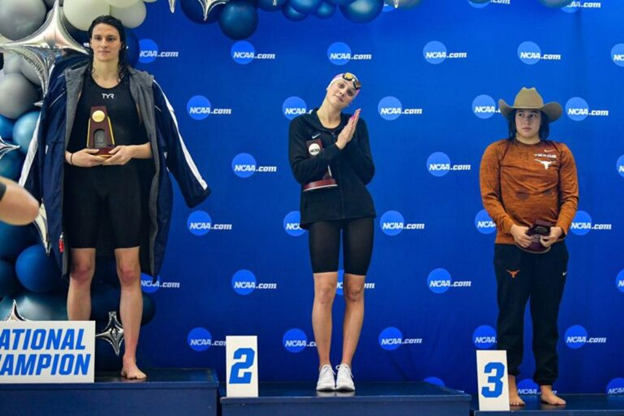 Letter to the University of Virginia Board of Visitors from Walter Smith.

Now that International Transgender Day of Visibility is behind us, it is safe to discuss your lack of visibility in the matter regarding UVa student Emma Weyant, who, in the world where reality and truth are valued, is the true women’s NCAA 500 freestyle swimming champion. None of you has spoken out regarding the injustice of her loss of the 1st-place trophy to a transgendered individual, Lia Thomas — a silence, I suspect, that arises from your terror of woke intersectionalists.

The only statement I have seen from any UVa official was a quote in The Jefferson Independent, in which President Jim Ryan bravely stated, “I’m not an expert on this and I haven’t been following it as closely as others… I have to say it seems unfair to me, at a very basic level.”

Wow! What clarity of thought! What bold leadership! I now see how Ryan was selected to lead Thomas Jefferson’s University — to make it Great and Good as only he can!

Consider the vast brainpower that UVa could bring to bear to address the quandary of how such a travesty could be allowed to occur. I have compiled a spreadsheet of 2020 salaries of President Ryan and his cabinet, the deans and the vice provosts. With the vacancies and promotions and salary increases from 2020, it appears that nearly $18 million of salary cannot solve this enigma. Our president, now employed until 2028, can’t. Our new Provost, employed through 2027, can’t. Our newly extended-until-2028 Chief Operating Officer can’t. Our Chief Human Resources Officer, now employed into 2027, can’t. Does his HR system track male and female? Can the HR system help? Can the female athletic director, to whom all coaches of all male and female teams report, provide a clue? Does she even care about her female athletes?

Or does the deafening silence of UVa leadership reveal an ideological prison where one cannot admit basic truths?

I’m not a biologist, and I didn’t clerk on the Supreme Court, and I was not dean of Harvard Ed School, and I was not a professor at UVA Law, and none of my daughters participated in a “girls” team sport, but I am sure that boys and girls are different, and at the collegiate level it is unfair to “people with XX chromosomes” to compete against “people with XY chromosomes.”

I did coach youth soccer and noticed that girl players could hold their own against boys until about 12 when the boys got to be too big, too strong, too fast. Your fellow BOV member, Hucles Mangano, can confirm this. She is a four-time soccer medalist in the Olympics. Perhaps she can recall the 2017 match in which the U.S. women’s national team lost an informal match to the FC Dallas U-15 boys academy team.

I’m no athlete either, but I can tell a similar tale. One summer in Charlottesville I went to Memorial Gym to play pick-up basketball. My team was a random group of guys. I would guess two or three played high school basketball; I and a couple of others were just guys looking to play some hoop. We called “winners” on another match in the gym and wound up playing members of the women’s basketball team. It was a decently competitive game. The guys won 15-12, and I had my first ever elbow thrown at me. (Girls play rough!) The UVa women were pretty good at this time. Debbie Ryan would have been the coach, and I think Geno Auriemma may have been an assistant coach.

In “Lia” Thomas’s last year as a man, he did not rank among the top 400 of male swimmers. Emma Weyant is the women’s champ. She has eggs and fallopian tubes and XX chromosomes and has the extraordinary power to carry a foetus to  birth. Lia Thomas does not. Thomas is 6′ 1″ in height and weighs in the vicinity of 165 pounds. Weyant is 5′ 8″ and weighs about 127 pounds. If Emma Weyant had Thomas’ testosterone level, she would be disqualified for doping.

But you won’t. Either you are captive to intersectional ideology or you are too timid to stand up to it. You accede to those who cast ruthless judgment upon figures from the past, remove their names from buildings and their statues from the grounds, and would contextualize the founders of this nation for falling short of contemporary values.

One day the worm will turn. One day, future generations will look back, marvel at your unwillingness to defend Emma Weyant, and contextualize you. By your cowardly silence, you prove you are not qualified to oversee the University of Virginia.