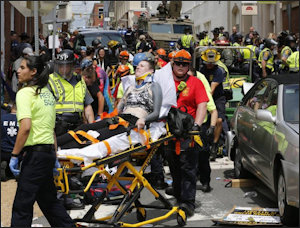 Scene from the aftermath of the Unite the 2017 Right rally in Charlottesville.

Think” of it as “Unite the Right 2.0.” Thousands of protesters from Virginia and beyond the state will be converging on Richmond, many packing heat, to support “Second Amendment Sanctuaries,” which are cities or counties that refuse any law passed by the Democratically controlled General Assembly to pass any law that in any way infringes on firearm rights.

This brings back memories of the violent 2017 demonstration in Charlottesville over removing Confederate memorials that ended up with the deaths of three people and the injuries of scores of others. Charlottesville overnight morphed into the ugly icon of the Trump who incredibly found equivalency between white supremacists and people who protested against them.

The Virginia Civil Defense League, a pro-gun group, has put together a complex organization for the event with chartered business leaving such as places as Abingdon for the reasonable price of about $30.

In Charlottesville in images that were circulated worldwide tough looking men in camouflaged that give Virginia a black eye as fascist, white power police state. Charlottesville and the state prepared badly for the travesty. There were no body checks, no electronic scanners, no separation between sides. (I have seen such things in other states). In a recent book highly critical of Charlottesville, former Gov. Terry McAuliffe bemoaned the fact that the white supremacists had higher quality and higher power rifles than the Virginia State Police did.

To its credit the Virginia Citizens Defense League has compiled a detailed list of what’s legal in terms and weapons and what is not. In general, Virginia is a free carry state but that seems to involve mostly holding a Concealed Carry Permit which does involves some modicum of education and practice. Although there are restrictions in Richmond, not so in state office buildings. Democrat Joe  Morrissey paraded an AK-47 around. Pistol Packing Momma Sen. Amanda strutted about with a revolver on her hip saying it was “very personal Equal Rights Amendment.”

To be fair, it seems that VCDL and other sanctuary backers are not the crazies that invaded Charlottesville in 2017. But there are likely going to be many more of them and if someone starts pulling triggers we could see a tragedy that makes Las Vegas seem like child’s play. At the minimum, it would unveil Virginia as a Wild East filled with crazies unworthy of a place where high tech firm would want to locate. Let’s hope that the cops have learned something in the past two and a half years and that the pro- gun control rights keep cool heads. Let’s also hope that gun control is finally voted in.

This entry was posted in Culture wars, Gun rights and tagged Peter Galuszka. Bookmark the permalink.