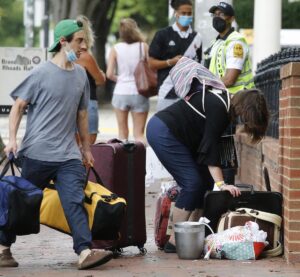 Against the backdrop of a stubbornly persistent COVID-19 epidemic, college kids are heading back to campus. Virginia’s colleges and universities soon will find out if all the students who paid deposits do, in fact, plan to attend this fall.

Preliminary evidence suggests that enrollment numbers will not decline dramatically, although epidemic-control measures will significantly reduce the number of students living on-campus.

Virginia Tech, which was dealing with an over-enrollment issue only two years ago, seems to be the most heavily impacted. While 6,728 freshmen enrolled at Tech, the university now projects the number to fall slightly below its goal of 6,675 when a census is taken in September, reports the Roanoke Times.

Uncertainty has never been greater in the higher-ed world. Colleges and universities have spent the summer devising ways to limit the spread of COVID-19 on their campuses, putting into place various combinations of online courses, testing, contact tracing, and social distancing. Many are reducing the number of students in dormitories. Meanwhile, many institutions are roiled internally as they grapple with social justice issues. All these issues come into play at a time that students’ families, many of whom are suffering from lower incomes during the recession, are questioning the value of a four-year residential college education.

Virginia Tech will hold a mix of in-person and online classes this fall. Students living in university housing will be required to get a COVID-19 test during their two-hour move-in slot. A university lab expects to process up to 1,000 tests daily, with results available in 24 hours. While 10,000 students normally live on dorms, Tech said initially that it anticipated 9,100. But Provost Cyril Clarke told the Board of Visitors Thursday that more prospective students are opting not to enroll, a phenomenon known as “melt,” the Roanoke Times says. Now the university expects only 8,600 living in dorms.

At the College of William & Mary, where senior administrators are so alarmed about finances that they have taken pay cuts, 6,300 undergraduate students and 2,600 graduate students are “enrolled” for the fall semester. The total of 8,900 students compares to an “unduplicated head count” of 9,611 in the 2018-19 school year and an annual “full-time equivalent” of 8,549, according to State Council of Higher Education for Virginia data.

The incoming freshman class includes 1,559 students, according to the Virginia Gazette. That compares to freshman enrollment of 1,531 in 2019-20.

While enrollment numbers appear to be holding up, the university has reduced the on-campus residential capacity under its COVID-fighting de-densification guidelines. Normal on-campus capacity is 5,820 residents. Maximum capacity under the new guidelines is 4,827, while only 3,857 were registered to live on campus. Room & board this year runs $13,356 per student. The loss of nearly 2,000 on-campus students represents a potential loss of $26 million.

And at Virginia Commonwealth University… administrators expect to house 4,000 on a campus built house more than 6,200, reports the Richmond Times-Dispatch. VCU pegs “living costs” at $15,266 per year for all students. Assuming those costs consist mostly of room & board, that implies a loss in the ballpark of $33 million. Last April, VCU projected about $50 million in revenue loss.

Meanwhile, both Christopher Newport University and Norfolk State University have delayed the start of class by two weeks. CNU President Paul Trible has said that the university will release students from on-campus housing contracts without penalty if they wish to remain home. When NSU reopens, it will commence with online instruction.

Public universities conduct a student “census” in September and report the numbers to SCHEV. The full count at all institutions should be available by October.