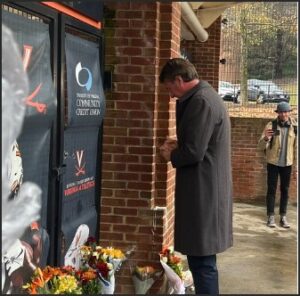 Donald Trump announced last night that he was running for president in 2024. The worst-kept secret in American history.

If I were a Democrat I’d be delighted.

While Trump always sucks the air out of the room and dominates the news cycle, other events were more important.

For instance, Poland reported yesterday that a Russian-made missile fell inside its border killing two, bringing the world ever closer to all-out war. Almost immediately #Article5 began trending on Twitter.

Russia denied that it fired one of its missiles into NATO territory, but the incident is a reminder that Europe is a very volatile place.

Oh, and apparently Joe Biden is feeling under the weather. Lucky us to have a feeble 80-year-old leading the Free World.

The emergency was first implemented by Trump in 2020, and renewed several times by Biden.

It needs to end.

Some of us tried to warn you that when free people hand the government unlimited powers they create a monster. Clawing power away from government is never easy. It needs to happen, though.

The Wall Street Journal reported on the vote:

The issue was put before Senate lawmakers on Tuesday by Kansas Republican Sen. Roger Marshall who called for a vote to end the declaration in September shortly after Mr. Biden said on CBS’s “60 Minutes” that “the pandemic is over.”

On the Senate floor on Tuesday, Mr. Marshall said the declaration should end because of lower coronavirus cases, fewer hospitalizations and lower mortality rates. He said that the emergency declaration was giving the Biden administration a way “to supersize government powers.”

Only the most insanely leftist Democrats in the Senate voted to keep the emergency declaration in place.

Thank you again for your leadership @RogerMarshallMD!

Will @SpeakerPelosi allow a House vote or will that have to wait for Speaker McCarthy???https://t.co/x33NZJgCRI pic.twitter.com/f0L0s42X2E

Here’s a statement from Warner explaining his vote:

When COVID-19 hit, Congress acted with urgency under a number of emergency declarations to provide the flexibilities and funding needed to save lives, roll out a vaccine, and keep our economy afloat. We’ve come a long way since then, and while it might be easier to kick the can down the road, I think it’s time to have a bipartisan conversation about how we unwind from these emergency actions and move forward with the valuable lessons we’ve learned. Today’s resolution won’t affect critical flexibilities, such as the ones facilitating access to telehealth. Rather, this vote should serve as the beginning of a productive and bipartisan effort to examine which mitigation efforts and flexibilities are worth embedding permanently into our lives, and which are no longer relevant or necessary.

Kudos to both Virginians.

Question is, will the House take up the measure or will we have to wait until the Republican majority is installed in January?

The triple slaying at UVA is still in the hearts and on the minds of Virginia. Well, most of Virginia. Some in self-absorbed Northern Virginia are too excited over a shiny new train to worry about a grief-stricken university.

Governor Glenn Youngkin visited the University of Virginia grounds yesterday and laid flowers by Scott Stadium where the three slain football players and their two wounded teammates played the sport they loved with joy and athleticism.

The Washington Post, which has declared war on the governor, actually sniped at Youngkin for his pilgrimage to Charlottesville.

Columnist Robert McCartney believes the governor should have been at the ceremonial grip ‘n grin at the opening of the Silver Line Extension to Dulles rather than comforting sad people in Charlottesville.

If you're a decent person, Robert, you'll delete this. But I'm pretty sure you're not going to. https://t.co/034Ymk63MM pic.twitter.com/YmWN4ScSgl

Just how tone-deaf can one journalist be?

This entry was posted in Media, Politics and tagged Kerry Dougherty, University of Virginia. Bookmark the permalink.