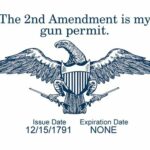 Answer eight simple questions correctly and you, too, could be a true Virginia conservative, joining the ideological movement which continues to challenge chances for Republican success in the Commonwealth.  Several high-profile candidates in next month’s contested GOP primaries have done so, earning good marks from a group calling itself Virginia Constitutional Conservatives.

Two out of eight involve enmity toward President Obama’s Affordable Care Act and its expansion of Medicaid eligibility.  One Obamacare question revisits the question which started the American Civil War and Virginia’s Massive Resistance – the concept of State Nullification.  The group is also offended by the idea you need a license to conceal your handgun of choice.

The eight questions follow, and you use this link to see the handful of candidates who actually responded.  Most sent the questions didn’t reply and earned R’s for Refused, a handful expressed support for most if not all positions, and two Democrats (including the always intrepid Vivian Watts of Annadale) answered.  Watts said no to most questions, but the other Democrat (a challenger) said yes to six.

That last question is helpfully explained as follows:  The 10th Amendment to the Constitution allows a State to “nullify” un-Constitutional laws, making them null and void within a State.  The Federal Government has no authority to regulate intrastate health care, nor to deny citizens the ability to purchase out of state health insurance.  John C. Calhoun would be proud.

Among those who made the grade are Scott Wyatt, who is challenging (or has already defeated, depending on who you believe) incumbent Delegate Chris Peace for the 97th District nomination.   Also correct down the line is Tina Freitas, who is challenging incumbent Senate Finance Committee Co-chair Emmett Hanger.  Three other incumbents joined Watts in responding, Republicans Senator Richard Stuart, Delegate Nick Freitas and Delegate Dave LaRock.

LaRock apparently left the nullification question blank.  But as noted the vast majority of GOP incumbents and non-incumbents didn’t participate at all. For them, the organizers ask people to print the questionnaire and go find their local candidates at forums to press for answers.  Driving the wedge as deeply and publicly as possible is the name of the game.

Even the organizers would have to admit that conservatism cannot be boiled down to eight questions, some of them rather peevish.  The health law prohibiting sale of unpasteurized milk products seems reasonable to me, but then all those vaccines over the years may have addled me.  If home school students want to play on a state contender football team, they should go to the affiliated school and not take a place away from somebody who does.

The questions about civil forfeiture and eminent domain might fit a classic definition of property rights, but there is no Second Amendment right to concealed weaponry and the nullification debate ended at Appomattox and in numerous Supreme Court decisions.  Voting today to eliminate all existing highway tolls would have the state abrogating debt agreements and destroying its credit rating, hardly outcomes conservatives dream about.

It isn’t necessary for progressives to create caricatures of conservatism when these folks stand up and volunteer.  This is not conservatism, it’s a coalition of prickly individualists.  They want to hide their guns, sell tainted cheese, cherry pick parts of the public education system, and kid themselves into thinking somebody else will pay for roads.  Where is the abortion question?  Nothing about environmental regulation or immigration?  Those are huge single-issue constituencies left out of the questions.

The tension between ideology and the give and take of practical governing defines and bedevils both parties.  People who vote yes enthusiastically on all eight of these questions may indeed prevail in some of these nomination contests, and then win in hard red districts.  But for those who want to see the Republican party competitive on a statewide level again in Virginia, this narrow definition of conservative remains a major roadblock.