To Be Elected Or Not 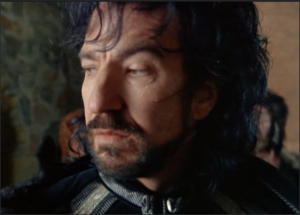 Alan Rickman as the Sheriff of Nottingham in “Robin Hood Prince of Thieves.” He was unaccountable, too.

The exploits of Robin Hood and his band of merry men in the cover of Sherwood Forest have been colored heroic as they engaged in a redistribution of wealth from one class of Englishmen to another. The Sheriff of Nottingham was a spoiler, though his mission was one of law and order as a minion of the king or royalty charged with maintaining peace and order while collecting taxes and rents (usually produce or farm animals) from the feudal estate and its serf residents. The sheriff (shire reeve) transplanted to the colonies morphed into an elective position and, in many instances to the present, is the sole and primary law enforcement officer in a jurisdiction.

The Virginia Sheriffs’ Association (VSA) counts 123 members responsible for the management of 8,000 to 9,000 deputies and staff. Most residents are familiar with the broad range of duties performed by sheriffs, from law enforcement to supervision of county and regional jails (with about 28,000 inmates), to service of process (over 3 million events), and security for city and county courts. Just over half of the sheriffs identify politically as independent; 29% as Republican; 15% as Democrat. Of the thirty city sheriffs, nine identify as independent, nine as Democrat, six as Republican, and six with no affiliation.

Whether a political party can represent a more appealing choice or prospect for enforcement of the law is debatable and likely irrelevant to voters. In the nation’s contemporary hyper-partisan environment, however, political intrusion into every electoral office has become the norm. At the end of 2019, the Loudoun County Board of Supervisors announced plans to create a county police department, in part it said, related to asserting civilian authority over the jurisdiction’s policing. The county’s sheriff proclaimed that the move was unnecessary because his office was held responsible and accountable every four years at election time. Besides, he offered, the proposal was a mere power grab by political opponents.

The VSA claims that it was the “driving force” behind legislation requiring a voter referendum for the creation of a police department because such stripped the sheriffs of law enforcement responsibilities. It also claims success for legislation requiring one deputy for each 1,500 residents, thereby ensuring staffing levels.

During 2019, the General Assembly adopted several firearms-control measures including a “red flag” law permitting seizure of weapons under court order where a threat to the possessor or others was shown. Three Virginia sheriffs publicly declared that they would not enforce such court orders, a view that was reinforced by a tidal wave of resolutions from local legislatures declaring their jurisdictions to be “Second Amendment” sanctuaries with many asserting a provision refraining from the expenditure of public funds for those purposes.
Breitbart News (11/24/2019) repeated a Washington Post piece quoting a sheriff:

My oath of office is to uphold the Constitution of the United States. He explained that he would not confiscate guns even under a judge’s order, if the law at the center of the judge’s ruling was unconstitutional. That’s what I hang my hat on.

Nationally, 1,459 of 2,144 jurisdictions adopted similar declarations with some experiencing similar sentiments from sheriffs (Colorado, Washington, New Mexico). The conflict in this regard may be compared analogously to the principle of civilian control of the military, a notion clearly challenged by remarks of the Loudoun sheriff opposing the proposal for a county police department:

This view of independence has been echoed by national voices in far more direct and challenging words. The website of the Constitutional Sheriffs and Peace Officers, a national advocacy organization, which claims membership of 300 of about 3,000 nationally, exhorts its purpose:

America needs to make a strong turn around to get back on the freedom track laid for us by our Founders. We believe it can’t be done from the top down, due to many factors, not the least of which is corruption and entrenched bureaucracies in high places. We must, and we can, accomplish this turn-around starting locally at the county level, and lower. The office of county sheriff is the last hope of making this happen, and we are witnessing great deeds of protection, service, and interposition across America by courageous sheriffs who only want to serve the people who elected them.

The necessity of experience and training for law enforcement officers is evident but in practice not required for oversight of public policy concerned with public safety. The declaration that sheriffs are the “last hope” of freedom is virtue signaling, detracting from shared civic responsibility within every jurisdiction.

Residents provide the bulk of funding for sheriff offices. The bulwark of qualified immunity, established by judicial rulings, has begun to be pierced, prompting insurers to insist that jurisdictions adopt policies modifying risk-taking by law enforcement such as high-speed chases and warrantless searches. The Breonna Taylor and George Floyd deaths produced settlements of $12 and $27 million respectively. Estimates of $3.2 billion over the past decade involving 40,000 incidents are reported – all of which costs are ultimately shouldered by taxpayers. No publicly-available data exist to distinguish the distribution of settlement amounts between sheriffs and police departments. While law enforcement officials protest the influence of insurers upon policing, the cost to the public is but one aspect of several factors posed to narrow the bandwidth of independence with respect to sheriffs.

Recently, the topic has been accorded some academic (intellectual?) cachet by the Clermont Institute, a California-based think tank now a MAGA foundry for Trumpian culture riven with luminaries like Larry Arnn, President of Hillsdale College and John Eastman. Slate (9/01/2022) reported on Clermont’s Sheriffs Fellowship project concluding:

They seem to be a key target of the movement because the office is already vulnerable to extremism and because sheriffs can enable other extremist actors like vigilantes and militias to wreak havoc on society. Claremont provides a historical and intellectual cover for selected sheriffs to continue a march into white Christian nationalism; for Claremont, the sheriffs are elected influencers who can push their message into the mainstream, far from the coterie of intellectual elites.

One of eight white male attendees at the first fellowship conference in November 2021 was the sheriff of Virginia’s Tazewell County. Commenting upon his experience at the conference, he offered, “We are facing movements across our Nation to take away punishments and any disciplinary actions from people committing crime.” On its face, the comment may read innocuously. In the context of the institute’s curriculum, the statement assumes a more overt political subtext. A sampling of the instructional topics conveys purposes that appear removed from traditional public safety concerns such as deputy recruitment and training:

Civilian authority over the military is a well-established and ingrained ethos in the nation’s culture since George Washington first accepted Congress as the superior to the military force he commanded. While sheriffs may take pride in their historical function as shire reeves, the nation in which they serve is no longer a feudal jurisdiction. The rule of law and the boundaries of law enforcement are creatures of the citizenry. Qualified immunity, formula staff funding, union regulations, and partisan politics have combined with repeated instances of police-civilian clashes to become flash point barriers to reconciliation of the conflicts. Alignment on the part of the sheriffs with political institutions and defiant resolutions only promote further conflict, while criticism of civilian authority for lacking police experience chills constructive discussion. Worse, however, is the nascent trajectory of a small number of sheriffs employing partisan or ideological views to nullify laws, a deadly mix of oxymoronic substance.

That more than half of Virginia’s sheriffs identify electorally as independent is comforting but the signs of partisan shifts are troubling especially as the demands for more effective service and protection increase. The small few that have adopted public politicized stances is to be regarded as testimony to a stronger ethos of service and protection free of political association. However, with financial pressures mounting upon government resources, causing insurers to intrude upon both civilian and law enforcement prerogatives for reforms, public policy alternatives are increasingly defined by circumstance rather than choice in the public forum.

Hamlet apprehended the quandary, “the rub,” to paraphrase: whether more dignity is shown by suffering the slings and arrows of fortune or by taking affirmative action against troubles to end them. A keen perception from the poet of Avon worth considering.

This entry was posted in Crime , corrections and law enforcement, Governance and tagged James McCarthy. Bookmark the permalink.