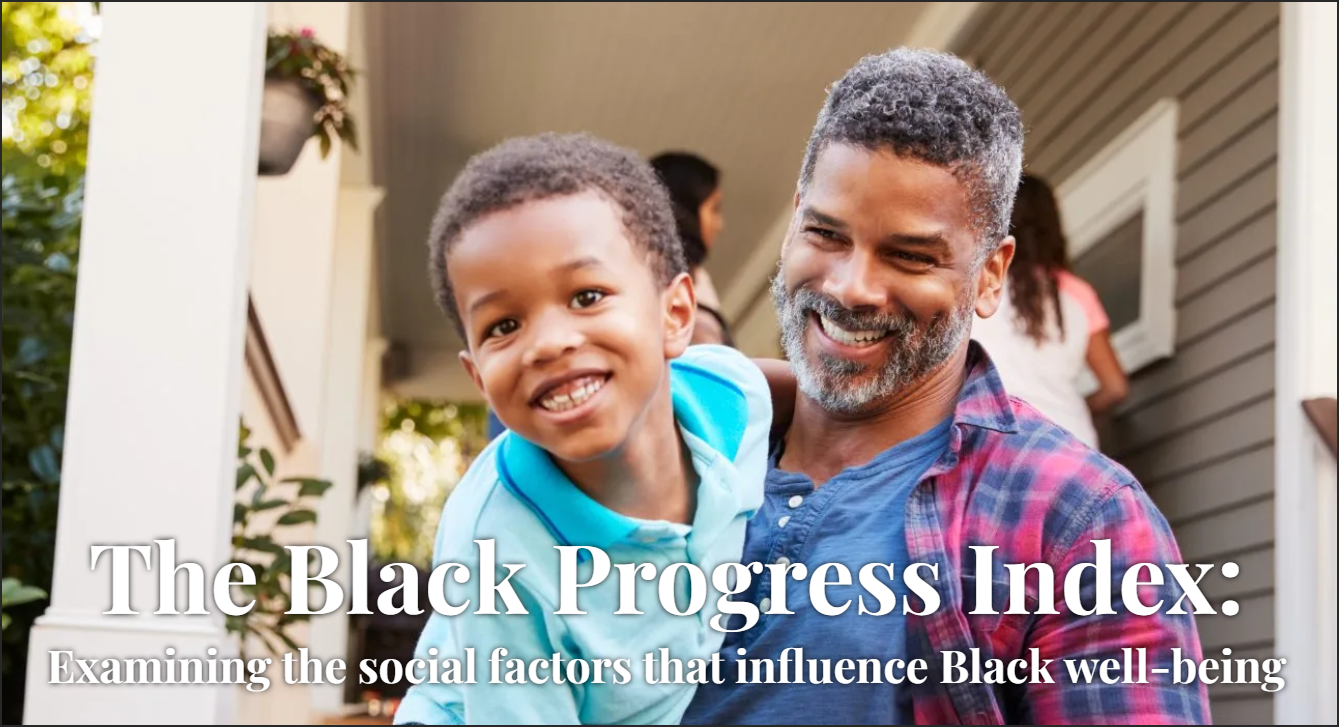 “Although we recognize that we have yet to fully correct or eradicate matters of racial inequality, we hope that issuing this apology with genuine remorse is a valuable step followed by additional actions,” the apology, issued in September 2020, read.

WUSA Channel 9 reported that the “Loudoun County NAACP President [Michelle Thomas] said racial issues run so deep in LCPS that they were stepping in to initiate town halls, adding that the school system had been on its radar for five decades since the integration of Black students into the school system.”

A year later, in her annual State of the County address, County Chair Phyllis Randall, the first African American woman elected to the position, said 2020 was a year of “a long overdue reckoning on systemic racism that has plagued America since its birth.”

Thomas’ activists pushed for a Comprehensive Equity Plan and the Action Plan to Combat Systemic Racism. The result, as we all know, was top-down revision of the school curriculum in Loudoun along lines of anti-racism and critical race theory, which has wreaked havoc among parents and helped Republicans win back Richmond in 2021.

But according to The Black Progress Index: examining the social factors that influence Black wellbeing (just released by the liberal Brookings Institution in D.C.), Virginia’s three largest counties are great places for African Americans to thrive. About 1,677 counties were ranked.
Loudoun is No. 5 on the list, Fairfax County, which also has had upheaval in its schools due to anti-racism pressure, is No. 8 and Prince William County No. 11. Henrico was 29.

“Progressive” Montgomery in Maryland ranks lower. No other Maryland jurisdiction is in the top 25.

The full list of counties, as well as their population counts, is visible here.

The 13 indicators the Brookings study team used to do the rankings fall into five categories, as follows: 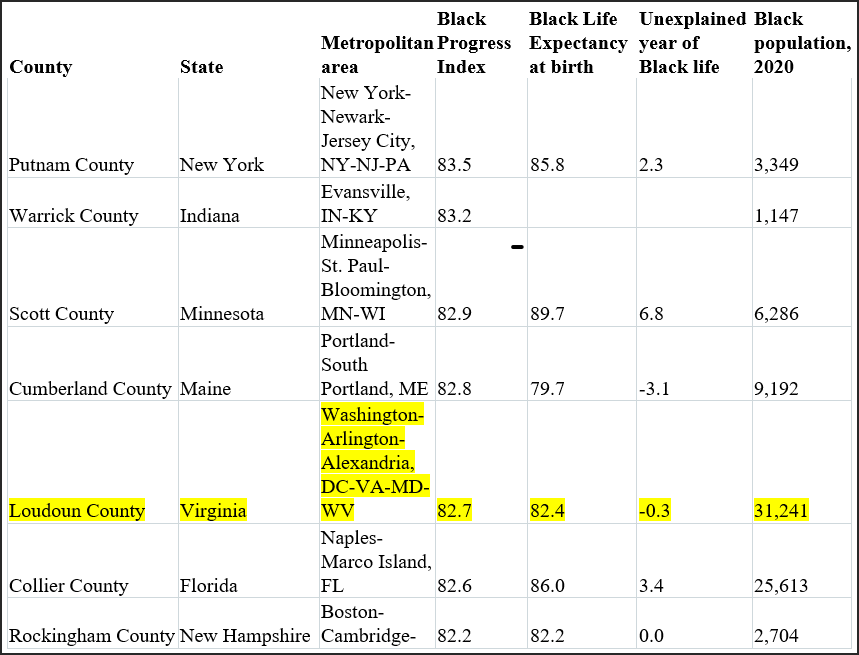 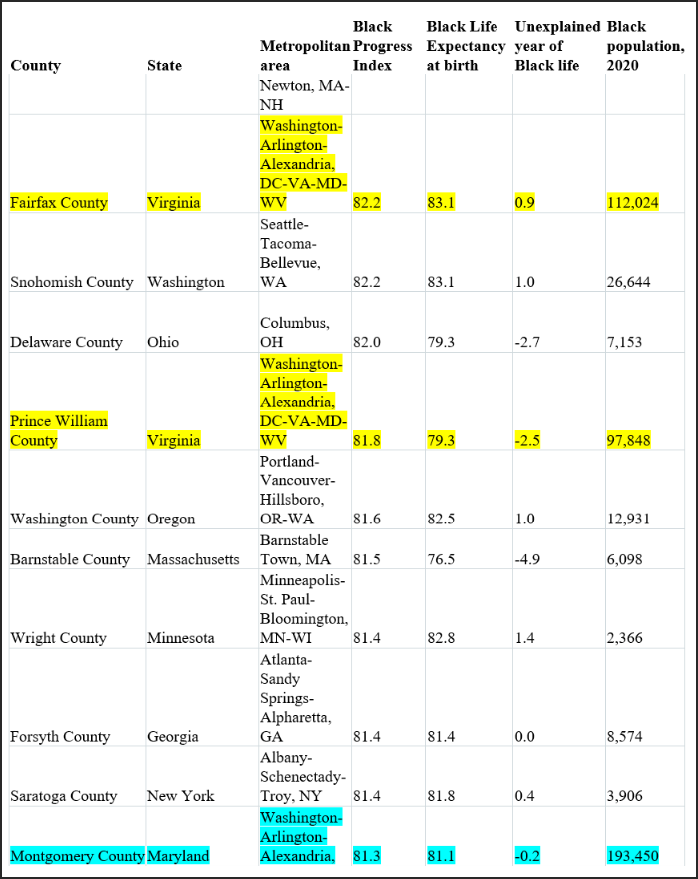 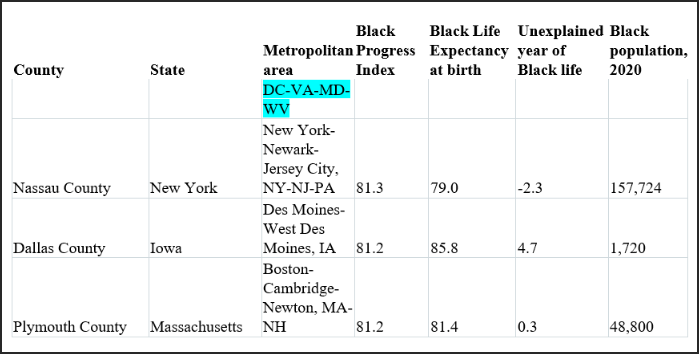 For example, there’s a correlation (no surprise here) between being college- educated and life expectancy. “The Black college attainment rate is very high in several counties in the Atlanta, Baltimore, and Washington, D.C. metro areas, including Forsyth County, Ga. (56%); Howard County, Md. (54%); and Arlington and Loudoun counties, Va. (51% and 50%, respectively). Life expectancy for Black adults in these places is also very high, ranging from 79.4 in Howard County to 82.4 in Loudoun County. ”

Interestingly, police shootings of Black suspects was NOT a factor in life expectancy. Brookings writes in a footnote: “We considered other variables that may predict either safety or high levels of discrimination, such as the number of police officers per capita, deaths from police encounters per capita, hate crimes per capita, and anti-Black hate crimes per capita. None of these variables were statistically significant in predicting Black life expectancy in the presence of our other 13 variables, so they were not included in the final model.”

In other words, facts -– not fear and hurt feelings and the whims of activists — should be used to make public policy and guide how we deal with racism, whether in the schools or other programs of government. Seems to Brookings that Virginia counties are pretty good places for African Americans to live and to thrive.

Ken Reid is a former Loudoun County supervisor and member of the Leesburg Town Council and currently lives in Tysons Corner. He is active in Republican politics in Virginia and authored the book, The Six Secrets to Winning ANY Local Election and Navigating Elected Office Once You Win.

This entry was posted in Race and race relations and tagged Ken Reid. Bookmark the permalink.