This Certainly Demonstrates Something (Don’t Ask) 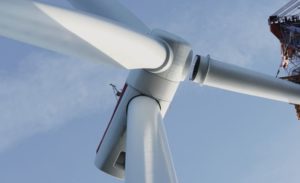 Under normal circumstances, building two wind turbines 27 miles off the coast of Virginia at a cost of $300 million would  be neither reasonable nor prudent.  They may produce the most expensive 12 megawatts of electricity in Virginia history. The only rational reason to go forward is to test technology which is becoming more common around the world but is still untested in hurricane territory.

On that basis the proposed Dominion Energy Virginia project now pending approval at the State Corporation Commission received a lukewarm blessing from the SCC’s staff, mainly because Dominion continues to talk about quickly following up with a far more extensive turbine project in the same location.  Before building the big project, perhaps 2,000 MW, some testing is a good idea.

But the staff commentary also noted it would make sense to give the test project (known as Coastal Virginia Offshore Wind or CVOW) time to prove itself before building a multi-billion-dollar expansion.

“Should the Company decide to move forward with a larger scale offshore wind project before the CVOW Project is in service and the demonstration is complete, or before the CVOW Project has demonstrated that it can survive a hurricane type storm, the Commission may want to consider requiring the risk of such a decision be borne or shared by shareholders,” wrote Gregory L. Abbott of the Division of Public Utility Regulation in pre-filed testimony.  He also suggested the SCC put a hard cap on the cost.

The staff filed several sets of testimony, parts which are kept confidential at the request of Dominion.  There will be two hearings, the first and perhaps most important next week dealing with questions about the SCC’s authority when the General Assembly has deemed that a project is “in the public interest” based on lobbyist assurances.

The General Assembly used that phrase in connection with CVOW.  Does that reduce or even eliminate the Commission’s authority to reject things based on outrageous cost or imprudence?  Of all the many things to win that valued legislative endorsement, this is by far the worst use of your money.

It is your money.  In effect, Dominion will pay for the project with those excess profits it is not using to pay customer refunds.  There will not be a separate (and easy to track) rate adjustment clause.  When the accounting for this project finally comes up for SCC review in 2021, assuming the General Assembly doesn’t change the rules for the umpteenth time, whatever Dominion has spent on this will reduce the amount of potential profit for refund. 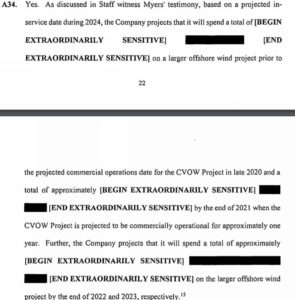 SCC staff witness Carol Myers dives into that, in a document replete with redaction.  The company hotly disputes her estimate of the real cost of the project at almost $700 million over 25 years, but it will have the incentive to prove a high cost in the next review because that prevents refunds or (the thought causes them to shiver) rate reductions.

The staff’s more technical comments focus on the high winds and high waves that might appear at the location, given historical records – which are spottier regarding waves than wind.  The staff worries the design may not be suited for a category 3 or higher storm.  There have been five of those in the area since 1879, and the Great Atlantic Hurricane of 1944 had reported wave heights of 100 feet.

The two turbines will have a 6-megawatt face plate value, smaller than the 8 MW turbines planned for the larger possible build out, so they are not demonstrating the future project.  The two towers will be connected to the grid by a 34.5 kilo volt underwater cable which is not capable of taking on additional turbines and thus will not be used in any larger project – another interesting decision.

Principal contractor Orsted is now very experienced installing and maintaining these systems and is involved with larger North American projects underway further up the Atlantic.  Ten years ago, a demonstration project seemed far more necessary than it does now.  Seven years ago, Newport News Shipbuilding and Gamesa planned a test turbine to demonstrate a maritime design, but that was to be built on land on the Eastern Shore, without using ratepayer money.  It was built in the Canary Islands instead but it was tested.

So $300 million (or more) to produce incredibly expensive power (78 cents per kilowatt hour or more) from technology known to work in a hurricane-prone location that gives Virginia ratepayers 100 percent of the risk of loss.  Details of the manufacturer’s warranty period are REDACTED.  What this demonstrates once again is how bad utility regulation is in Virginia.

If it all goes as planned, the politicos will be out on boats getting their brochure photos by Christmas of 2020.

There are currently 1 comments highlighted: 113460.

This entry was posted in Energy, Environment and tagged Dominion, Stephen D. Haner. Bookmark the permalink.

25 responses to “This Certainly Demonstrates Something (Don’t Ask)”