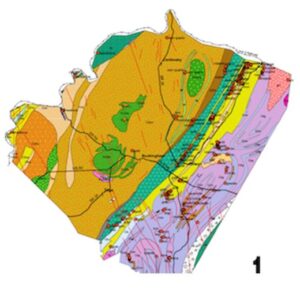 It seems there is a vein of quartz underground in Buckingham County sparkling with gold. The General Assembly almost prohibited mining it, but then backed off. This time.

A string of historic gold mines going back to the 19th Century appear as red dots on the county geological survey map like chigger bites on the skin of the land. Exploratory drilling by a Canadian company, Aston Bay Holdings, found significant new quantities of gold there.

From about the depth of a water well — 150 to 300 feet– Aston Bay’s diamond drills pulled up broken columns of translucent white quartz flecked with yellow metal. They drilled and drilled again for about 200 yards, two dozen holes, rarely drilling without finding more quartz glinting with gold.

How rich is the find? In Nevada major mines dig rock from open pits, pile up mountains of pulverized pebbles, and then trickle cyanide through the rocks to leach the gold. Such large-scale commercial production breaks even at about two grams of gold per ton of rock.

Aston Bay says it assayed Buckingham County surface grab samples at 701 grams of gold per ton. Drilling yielded up to 37 grams per ton in the underground vein.

Mark Twain is said to have said, “A gold mine is a hole in the ground with a liar standing on top of it.” That attribution is unconfirmed; possibly itself a fib. Aston Bay is telling the truth about finding gold in Buckingham County but there are some…. issues.

Twain did say in “Roughing It,” based on his personal experience of silver mining in Virginia City, Nevada: “You could … get your stock printed, and with nothing whatever to prove that your mine was worth a straw, you could put your stock on the market and sell out for hundreds and even thousands of dollars. … If the rock was moderately promising, we followed the custom of the country, used strong adjectives and frothed at the mouth as if a very marvel in silver discoveries had transpired.”

Since its founding in 2011, Aston Bay has issued about 160 million shares of stock. Each share trades now for less than four cents. Never got above six cents, even after the press release describing the Buckingham strike. “Fool’s Gold,” is what brokers call penny stocks in minor mining companies.

Aston Bay so far has not actually mined the gold. It has never made a profit from operations. Its financial statements look bleak. Words appear like “comprehensive loss” and “accumulated deficit.” Independent auditors draw attention to “significant doubt” whether the company will continue as a going concern.

Financial statements are dull and depressing, so let’s turn our attention to the Virginia General Assembly.

Last February our legislature considered, but failed to pass, a bill which would  temporarily ban gold mining. Instead lawmakers sent the Governor a truncated version establishing a working group to study the safety question, which he signed in March.

Mountains of slippery crushed gravel, tanks and ponds of cyanide — what could go wrong?

The James River is Richmond’s drinking water. Buckingham County is just a few counties upstream from Richmond. Could a thunderstorm flood the James with gold laden streams of deadly cyanide? If the politicians in Richmond drank it, would we be sorry?

Speaking personally, yes, because this time the General Assembly got it right.

To ban mining outright would stifle the incentive to explore possibilities for innovative, safer, environmentally friendlier mining methods. Corn-starch, for instance. A few years ago a postdoc graduate student named Zhichang Liu at Northwestern University accidentally hit upon what is touted as a “green” process using corn-starch instead of cyanide to leach gold.

It works in the lab, but whether corn starch can scale up to industrial production is undemonstrated. Banning mining outright would kill any incentive to find out.

And, let’s get real here. There is no urgency. Aston Bay is not now mining in Buckingham County, and won’t be any time soon unless it can raise a lot of money (also noted in its financial statement).

Gone are the days of the hardy lone prospector, panning a fortune out of river gravel. Mining now requires concentrated capital, massive corporate investment to move and sift unimaginable quantities of rock and dirt. Drilling core samples is cheap. Mining hard rock is not.

Reporter Sarah Vogelsong wrote a well researched Virginia Mercury article about this last February when the General Assembly was considering the mining ban. She cited John Chermak, a professor with Virginia Tech’s Office of Geosciences, who said “the chance of an exploration becoming a mine in the gold industry, the number is usually less than 5 percent.” She also quotes David Spears, Virginia’s state geologist and director of DMME’s Division of Geology and Mineral Resources, who said exploratory drilling had occurred at two other Buckingham sites over the past 40 years “and never turned into a mine.”

Does Aston Bay expect to sell more stock for capital to dig and blast and scrape out the quartz and crush it to powder and pile it in tanks and leach out the gold? Even so, a granite wall of opposition by zealous and very effective Woke environmental activists will most likely stop it cold. The locals already stopped the Atlantic Coast pipeline.

Aston Holdings knows that. So what is it up to?

Perhaps mining press releases. With enough hype attracting attention maybe Aston Holdings can sell its drilling data and mineral leases to a bigger company. Which in turn may re-sell to yet another.

“[W]e judged that we had learned the real secret of success in silver mining—which was, not to mine the silver ourselves by the sweat of our brows and the labor of our hands, but to sell the ledges to the dull slaves of toil and let them do the mining!” — “Roughing It”

Selling and re-selling a gold seam underground does not however create jobs in Buckingham Country, one reason the legislature put off a gold mining ban.

Kudos to an uncharacteristically laissez-faire General Assembly for taking its time. Waiting rather than meddling. Seeking to be better informed before it legislates Virginia gold mining — real or imagined — into oblivion.

Jock Yellott is a Charlottesville attorney.