The Shockley-Goldsby Debate: The Rest of the Story 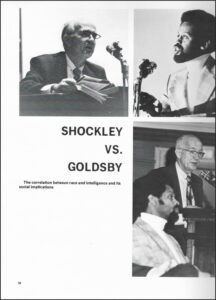 In August The Cavalier Daily ignited a furor over Bert Ellis, a conservative businessman whom Governor Glenn Youngkin appointed to the University of Virginia Board of Visitors. In a lengthy article, the student newspaper detailed Ellis’ role, as a tri-committee chairman of the University Union, in bringing Nobel Prize winner William Shockley to the University for a debate about race and IQ.

Shockley’s views about Black intellectual inferiority have been broadly rejected by American society in the 47 years since Shockley went mano a mano with African-American biologist Richard Goldsby. But the event has been cited as the most damning of multiple reasons to demand Ellis’ resignation from the Board. As the UVa Student Council, the Democratic Party of Virginia and various media outlets have repeated the story, it has morphed into a narrative in which, to quote The Washington Post editorial board, Ellis “organized a campus talk” by a racist. No mention of a debate. No mention of Goldsby. No mention of the fact that Ellis was one of three student chairmen who ran the University Union.

Here’s what the narrative underplays or omits entirely: first, the University Union had reached out to local African-American groups in 1974 when planning the debate. Second, Ellis was one of three tri-chairmen who called the shots, although, as spokesman for the group, he was the only one quoted in The Cavalier Daily coverage of the controversy. Third, when the three tri-chairmen made the final decision, Ellis voted to cancel the debate. But he was in the minority, and he was overruled.

In sum, the portrayal of Ellis’ role in the controversy is so shorn of context that it amounts to character assassination. Here follows the full story:

William Shockley was widely acclaimed as the inventor of the transistor, an accomplishment for which he was awarded the 1956 Nobel Prize in physics. By the 1970s, he had turned his attention to the study of the inheritability of intelligence and its variability between the races. He propounded the view that Blacks had lower intelligence, on average, not due to environmental conditions but due to their genetic inheritance. This idea, though held by many, was hotly- contested. A series of debates had been organized, including one at Harvard University. The leaders of the University Union, the student-run group that organized major events, thought the topic would be of interest at UVa.

Harvard booked Roy Innes, a prominent African-American leader and director of the Congress of Racial Equality, to debate Shockley. The University Union wanted to replicate that format.

Before signing up Shockley and Innes, the University Union touched bases with two groups for feedback from UVa’s African-Americans. One was the Black Student Alliance, the other was the Minority Culture Committee. The idea was to schedule the event in February 1975 during Black Culture Week as a way to bring attention to that celebration.

Here is how, as quoted by the 1974 Cavalier Daily, Ellis remembered the interaction with Sheila Crider, Black Culture Week chairman: “She was asked as minority Culture Committee co-chairman to find out the black attitude towards the debate, and she reported that blacks would be in favor of them, book them.”

The Cavalier Daily also reported that Donald “Doc” Spell, Crider’s co-chairman, had agreed to the debate with the stipulation that someone other than Innes debate Shockley. He later came to oppose the debate in the face of “totally negative feedback” from Black students.

In an October 1974 letter to the CD, Crider denied that she had ever agreed to the debate. Yes, Ellis had reached out, but only to ask which date she preferred during Black Culture Week. “Ironic, isn’t it? To schedule a speaker on Black inferiority during a week dedicated to teaching Black achievement?”

Whatever the degree of buy-in from Black student groups early in the process, the mood shifted. Harvard students denounced the invitation to Shockley, and the debate there was canceled. For reasons unexplained in The Cavalier Daily coverage at the time — perhaps Spell’s insistence — Innes dropped out of the picture. As awareness of the upcoming event spread in the early fall of 1974, Black students at UVa began expressing vehement opposition.

The Cavalier Daily referred vaguely to “negotiations” between Ellis and Black student leaders but provided no details. Reading between the lines of the CD articles, Ellis was in a tight spot. As he said at the time, “Business-wise, you can’t sign contracts for a debate and three months later cancel. The agencies won’t stand for it.” He tried to find a solution that Black students could live with. One option mentioned more than once was to reschedule the debate so it did not coincide with Black Culture Week.

As the controversy unfolded, Ellis wavered. He asked the Student Council to give an advisory opinion. After what was described as a contentious, two-hour debate, Student Council voted 13 to 11 to advise the University Union to not hold the debate. Opponents declared Shockley’s views to be abhorrent and an insult to the Blacks attending UVa. Proponents generally took the tack that the UVa community should respect freedom of speech and be willing to hear unpopular viewpoints.

The Cavalier Daily quoted Ellis as saying that he would probably stand by the Council’s recommendation.

However, Ellis was not the final decision-maker. As The Cavalier Daily reported:

The Union’s other Tri-Chairmen, Rick Kruger and Mary Dudley, said last night they will vote to retain the debate. This will offset Mr. Ellis’ vote and send the issue to the Union’s 22 co-chairmen, elected at large by the Union, for a decision.

As The Cavalier Daily had foretold, the University Union did, in fact, determine to hold the debate despite the Council’s recommendation. The Student Union co-chairmen voted by a decisive margin to forge ahead. However, the newspaper’s reporting provided seemingly contradictory descriptions of Ellis’ actions. First this:

Citing the Union’s efforts to go through proper channels in getting black opinion, the effects of a precedent cancelling a controversial debate, and the fact that such a debate would be an academic exercise, Union Tri-Chairman and Spokesman Bert Ellis urged the Co-[Chairmen] to not cancel the debate.

Though Mr. Ellis did vote to cancel the debate, the Union’s other Tri-Chairman, Rick Kruger and Mary Dudley, voted to retain the debate. This sent the decision to the Union’s 22 co-chairmen, elected at large by the Union, for a decision.

Perhaps Ellis felt honor-bound to live up to his promise to cast a vote in the University Union consistent with the Student Council’s recommendation, even if he did not personally agree with it. When asked about his stance back then, Ellis today tells Bacon’s Rebellion, “At one point I said, maybe we should just cancel it.” But seeing himself as a team player, he continued to speak, as spokesman, for the team.

Preparations for the debate proceeded, and the controversy faded from the pages of The Cavalier Daily. Wanting someone “formidable” to take on Shockley, the University Union recruited Goldsby, an African-American Amherst university professor and author of a 1971 book, “Race and Races.”

The debate was held in February 1975. The Cavalier Daily published a short front-page article that devoted several paragraphs to Shockley’s statements and only two to Goldsby’s.

In Ellis’ recollection, Goldsby demolished Shockley, just as the debate organizers hoped he would. In his mind, the debate served to discredit Shockley’s racist premises. I reached out last week to Kruger, the behind-the-scenes champion of the event to see if he shared Ellis’ view, but he declined to respond to my email. In reviewing the CD archives, I could find no letters to the editor commenting on the debate one way or the other. One thing can be said for certain: the controversy over Shockley died and remained buried for 47 years until The Cavalier Daily resurrected it this August.