The Role of Union Money in the 2019 Elections 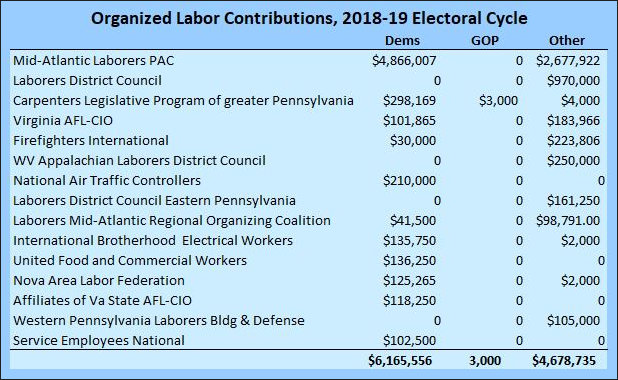 Organized labor may not be the biggest source of campaign contributions in Virginia, but it is one of the most consistently reliable supporters of Democratic candidates. Virginia Public Access Project data shows that labor unions have contributed $4.8 million in the current electoral cycle, favoring Democrats over Republicans by a 200-to-1 margin (not accounting for “other” contributions, which could make the ratio even more lopsided).

What does organized labor think it’s getting from Democratic Party candidates? Primarily, the unions want to elect Democrats who will support Project Labor Agreements requiring unionized labor in big state construction contracts. Repeal of Right to Work might be a distant secondary factor, but I don’t discern any evidence from these numbers that Big Labor has ginned up a campaign to reverse the long-standing law…. not yet.

Other than the AFL-CIO and the Firefighters International, industrial labor unions and public-sector labor unions do not rank among the big contributors (more than $100,000) in this electoral cycle. The overwhelming majority of labor contributions come from the construction trades. Construction unions are interested in one thing: using government to give unionized companies a competitive advantage over non-union companies in bidding for big infrastructure contracts. The goal is to get state/local governments and independent authorities to sign Project Labor Agreements (PLAs) to restrict bidding to unionized companies. (It would be interesting to research the contributions of construction companies to see if unionized companies donate mainly to Democrats and non-union companies mainly to Republicans).

For decades, repeal of Right to Work was never on the table in Virginia, and labor unions didn’t waste much effort on trying to reverse the law, which protects the rights of employees not to join a union. Suddenly, though, as Democrats seem poised to take control of the General Assembly, Right to Work seems to be in play among the younger generation of leftist legislators.

If the thought of overturning Right to Work really was motivating union contributions, however, I’d expect to see a broader cross-section of labor organizations contributing serious money to Democratic candidates. Compelling all wage-earning employees to join a union increases a union’s take from dues and assessments, and bigger union dues translates directly into bigger campaign contributions to Democrats, so the Dem/union alliance is a natural one. But the unions appear to be treating the 2019 election as business-as-usual, and their contributions have shown no spike upwards from previous years. Should the Dems win the General Assembly in November, the political calculus likely will change.

Note: Unions make huge contributions to entities that VPAP classifies as “other,” as in neither Democrat nor Republican. “Other” usually indicates that the union is contributing money to a Political Action Committee or a Political Education Fund. VPAP does not track how those funds are spent, but it is safe assumption that union PACs and education funds favor Democrats as consistently as their direct campaign contributions do.