The Rioters Among Us 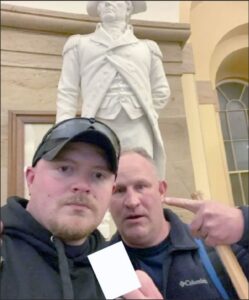 Jacob Fracker (left) and T.J. Robertson at the U.S. Capitol

I’ve not given much attention to the Jan. 6 riot at the U.S. Capitol because this is a Virginia blog, not a blog about Donald Trump and the 2020 presidential election. But maybe I should. Many of the rioters came from Virginia. We have U.S. Capitol rioters among us. How dangerous are these people? Do they, as CNN implies with its “Democracy in Peril” tagline, represent a threat to our democratic republic?

Some truly bad guys might have been involved in the riot.  Several members of the right-wing Oath Keepers have been charged with seditious conspiracy. I withhold judgment until I see the evidence presented in court. But none of the Oath Keepers claim Virginia as their home. What about our rioters? Two news stories today give us some clues to the level of danger they pose.

Paralyzed-arm guy. Two Virginia Beach brothers — Eric and Paul Von Bernewitz — have plead guilty to charges of violent entry and disorderly conduct on the Capitol grounds. According to WAVY-TV, Eric wanted to attend the rally for President Donald Trump that day and his brother Paul agreed to go along because he wanted to watch after his brother, who has a paralyzed right arm. They told investigators they got caught up in the excitement of the crowd as they marched to the Capitol after the Trump speech.

Flagpole guy. Federal prosecutors have charged Thomas “T.J.” Robertson, with carrying “a deadly and dangerous weapon,” during the riot. What was it? A semi-automatic rifle? A hand-made bomb? A handgun? No, “a large wooden stick,” reports the Roanoke Times. Robertson, a 48-year-old former Rocky Mount Police Department sergeant, also was charged with felonious participation in civil disorder. A fellow Rocky Mount officer, Jacob Fracker was charged, too.

The indictment does not describe the wooden stick in question, but the Roanoke Times notes that Robertson and Jacobs posed for a selfie in front of a statue of Revolutionary War hero John Stark. Robertson was holding a wooden object that he later told a reporter was the pole of an American flag. (If you know anything about Oriental stick fighting, you know you don’t grasp the stick at the top as Robertson did in the photo. He appears to be holding it like a walking stick.)

The Jan. 6 riot was a terrible thing. Mob actions are wrong. Rioters should be prosecuted. Anyone conspiring to disrupt the proceedings that certified the November 2020 election result should be punished appropriately. But was this an “insurrection,” an effort to overthrow democracy? Democrats and Republicans alike are spinning this story like mad. Again, I await the prosecution’s presentation of the evidence and the defense’s cross-examination before I draw any conclusions.

But I will say this: when one of the Virginia rioters was a dude with a paralyzed arm, and another was a 48-year-old small-town police officer carrying what might have been a flagpole while pausing to pose for a selfie, I’m thinking that many participants in the event just got carried away. Getting carried away is not a defense. They need to be punished accordingly. But they’re not brown shirts. Democracy is not in peril — not from them.

This entry was posted in Crime , corrections and law enforcement, Elections and tagged James A. Bacon. Bookmark the permalink.