The Last of The Pistol Packin’ Mamas? 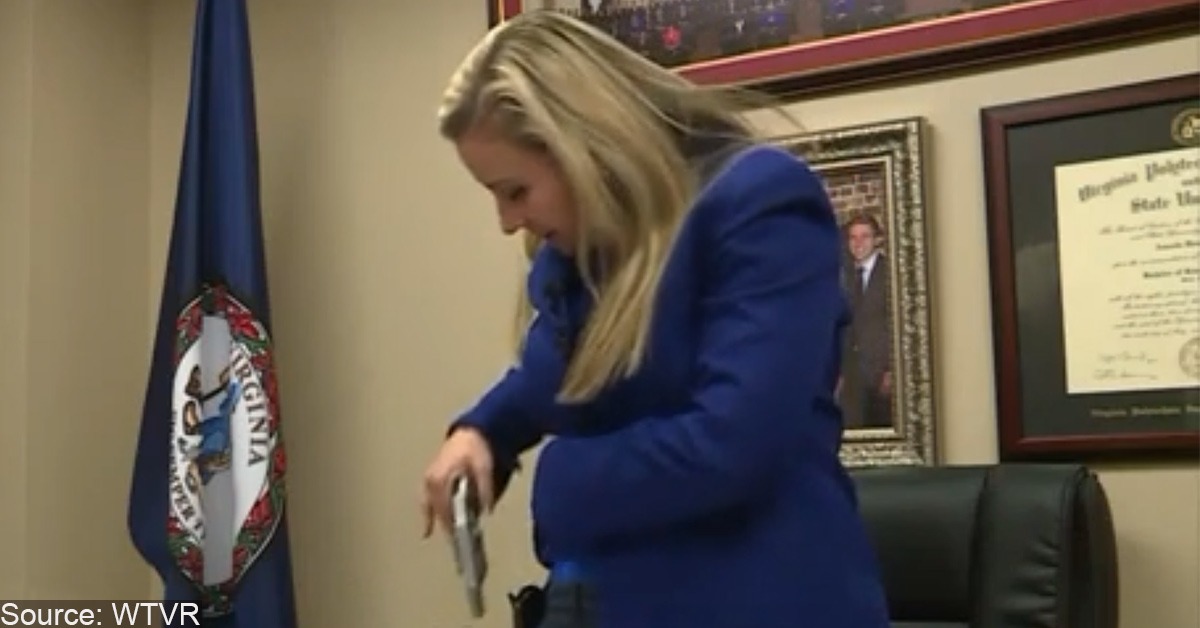 She’s picked up on every bad feeling out there and amplified it, including pent-up anger against minorities, immigrants, government workers, women’s rights and gun control advocates and more.

She’s had a weekly radio show, “Cut to the Chase” in her home Chesterfield County where she vented her views.

When the Senate considered ratifying the Equal Rights Amendment passed decades ago, she strapped on a .38 revolver on her right hip, sashayed to the podium and pronounced it “My personal ERA.”

To be sure, Chase did some things right. She blocked Dominion when it tried to push its way to dispose of coal ash waste on its terms. Then she stumbled. She got into a pointless verbal battle with a Capitol police officer, who happened to be African-American, about where she can park. She annoyed female voters by implying that rape can somehow be their own fault. Her campaign material said she’s not afraid to “shoot down gun groups” in a state where worries about gun control are the No. 1 concern. Then she insulted Sheriff Karl Leonard, a fellow GOP candidate, by saying he had let Chesterfield become “sanctuary” for illegal immigrants. The untruthfulness of the comment was too much for the county GOP, which booted her on Sept. 30.

Chase is still running for the 11th Senate seat against Democrat Amanda Pohl who has seriously out-raised her in political funds. Chase could still win in November, but the events represent a turning point.

The Tea Party reaction in Virginia and elsewhere reached a high point around 2010 when Tea Partiers held a “PATRIOTS CONVENTION” at the Richmond convention center where it was attended by fiscal conservative wonks, gun rights people covered in holsters, guns, Velcro body armor and buttons and a Patrick Henry impersonator or two.

Soon, license plates sanctioned by the Department of Motor Vehicles showing the familiar orange “Don’t Tread on Me,” flag were everywhere, especially, it seemed, on pickup trucks with oversized tires.

The movement was fascinating. Was it white reaction against Barack Obama, our first African-American president? Frustration with endless wars in Central Asia? The real estate and 401-(k) meltdown that the bipartisan bad policies of Bill Clinton and George W. Bush brought?

I found an article in The New Yorker from about a year ago. It offers this observation:

“Harvard political scientists Theda Skocpol and Vanessa Williamson noted that ‘The generational perspective of most Tea Partiers is unmistakable, Many people in the movement were over fifty, and fixed in their certainty that immigrants and young people are scamming benefits from the welfare state, their entwinement with an earlier generation of conservative media misinformation, and the intensity of their dyspepsia. Tea Partiers were even more likely than other conservatives to attribute the struggles of members of racial minorities to ‘their own personal failings but, the authors point out, they were were also likely to believe the same of whites.’”

The Tea Party seemed to have reached its high point with the election of Donald Trump, who is not really a Republican or a Democrat, but rather a showman with no particular worldview other than himself.

U.S. Rep Dave Brat used Tea Party muscle to nail Eric Cantor and keep him from being speaker of the house. That was national news but Brat turned out to be even more out of touch with his constituents than Cantor was and he was booted out by Abigail Spanberger, a striking, young and unusually articulate rising Democratic star.

Was that the real end of the Tea Party movement? One different between Spanberger and Chase is that Spanberger has actually carried a gun in the line of duty and didn’t use one for fun and show. She was a federal postal agent and then a clandestine officer of the Central Intelligence Agency. One of Spanberger’s sister Congressional Democratic freshmen is Elaine Luria, a retired Navy commander who graduated from the U.S. Naval Academy. She also knows how to handle pistols, not to mention Tomahawk missiles, and doesn’t somehow need to brandish those facts in a clownish way like Chase. Maybe Luria actually understands what such weapons are for.

It seems that the time for people like Chase has passed. What’s needed are sensible, mature adults who don’t harbor resentments and are willing to fix up the mess that Donald Trump continues to make.

This entry was posted in Culture wars, Politics and tagged Peter Galuszka. Bookmark the permalink.

23 responses to “The Last of The Pistol Packin’ Mamas?”