The Impermeable Thought Bubble that Is the Washington Post 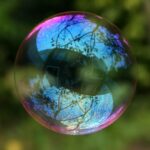 Here’s the Washington Post’s take on the Critical Race Theory furor in Northern Virginia: Nothing to see here, move along now.

The controversy over implementation of social-justice ideology in Virginia public schools has gotten so intense that there is simply no ignoring it, as the WaPo did for months. WaPo may be the last media outlet to acknowledge the tumult in its own back yard.

Now the WaPo is giving credence to the Democratic Party talking point that Republicans are creating a “scare tactic” or sending out “dog whistles” to stir up the base this fall.

A recent article addressing the controversy quotes Stephen Farnsworth, a University of Mary Washington political science professor, as saying that turning CRT into a target is a way to motivate Republicans to vote in a nonpresidential election year. “The threat that there’s some evil outside force pushing a radical agenda into your elementary school is a vehicle for getting people energized,” he said. “It’s more about turnout of the base than persuasion.”

Just one problem with Farnsworth’s theory: Republican candidate for governor Glenn Youngkin is highlighting the controversy not in the hope of stirring people up, he’s highlighting it because people are already stirred up — and they were stirred up long before he made it an issue. On this issue, Youngkin is a follower, not a leader. So, too, is the polarizing Donald Trump, whose irrelevant views the Post dragged into the story.

The Post would know this if it did the slightest bit of reporting on what is actually occurring in the Virginia Department of Education, Fairfax County, Loudoun County, Virginia Beach, Albemarle County, and many other parts of the state. And by reporting, I don’t mean just writing he said/she said pieces from “both sides” of the issue. I mean reading publicly available documents and listening to what school officials are saying and doing.

As I’ve noted many times, progressive school officials, the Post and the Democratic Party have resorted to a semantical dodge. Critical Race Theory, they say, is an obscure academic doctrine that’s taught at the university level but not in public schools. They thereby ignore volumes of evidence that thinking derived from CRT is driving strategic plans, informing teacher training, shaping curricula and disciplinary policies, and influencing what students are being taught.

The term “Critical Race Theory,” as used by conservatives, is simply short-hand for implementing Diversity, Equity & Inclusion, Social Educational Learning, the downgrading of educational standards, and a host of other social justice agendas based on the premise of systemic racism, white oppression, and minority victimization.

I cannot recall any other example of a newspaper’s local news coverage so utterly divorced from reality. The chasm is so wide that it’s hard to attribute it to mere ignorance, or even to the usual media bias. I find myself entertaining what once would have been impossible to contemplate: that the WaPo’s storyline reflects a deliberate effort to defuse a potent Republican issue and throw the election to Terry McAuliffe.

I hope I’m wrong about that. But the most benign interpretation of the Post’s coverage is that its reporters are trapped inside such an impermeable thought bubble that they are incapable of reporting honestly what’s happening around them.

This entry was posted in Culture wars, Education (K-12), Media and tagged James A. Bacon. Bookmark the permalink.