The Honesty Gap: Yes, Virginia, There Is a Problem 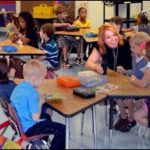 Two days ago, Governor Glenn Youngkin released the analysis of achievement and accountability in Virginia that was part of his executive order package when he took office. It was an open secret this was coming – it was right there in the EO – yet there is still some surprise. Here’s the RTD.

The surprise is likely because it’s pretty comprehensive. It’s reflexively getting framed as Youngkin versus Ralph Northam – the previous governor – but the problems the report outlines are more longstanding.

And they are real. If you live in the commonwealth you should read it because it’s an important and relatively unsparing look at achievement gaps that are too rarely discussed in Virginia, and some of the gamesmanship employed to sweep them under the rug. It also has information about overall achievement that is sobering. There is a lot of work to do to create a genuinely inclusive school system in Virginia…

First, the report is a good look at the tension between looking good and doing well or as we sometimes call it around here, achievement realists versus public relationists. Every state should think about an analysis like this that gets beneath the puffery and reflexive tendency to focus on silver linings disproportionately to clouds.

Second, it will be a good test of where we are politically in education. Is there a bipartisan center to set aside various disagreements and political issues and work on this particular issue? I don’t know the answer to that but I hope so.

Third, if you like to argue about NAEP you will have fun with this report. But focusing on various point estimates misses the forest for the trees. The gaps in this report are substantial and run in one direction. We have to do better. In particular, the numbers for 8th-graders, when the paths that will be open to students really come into focus, should shock. About one in five Black students are proficient and less than one in five low-income students.

That means getting serious on accountability, doing more to support teachers, providing more choices for families, and a more equitable finance system. It’s a tall order and one with something for everyone to oppose. That’s the challenge, and the opportunity.

Yesterday we talked about the honesty gap analysis that was released in Virginia.

A lot of response. One that caught my eye was a truly remarkable article in The Washington Post , which, instead of reporting the scope of the analysis that Virginia released, more or less just took it on, and essentially made the case that who cares about proficient, basic is good enough! Almost half of kids proficient is actually really great – at least relatively. Moreover, the article didn’t engage with the rampant racial, ethnic, and income achievement gaps the report laid out, or the information about how the state has systematically changed its accountability system to make things look better over time.

It’s particularly startling when you juxtapose that article against this Washington Post editorial from just a few years ago on the same issue:

Mr. Northam’s comments are part of an unfortunate trend in Virginia to pull back from rigor in assessments and accountability. Instead of adopting the muscular requirements of Common Core and its assessments, the state has stuck with assessments seen to be among the easiest in the nation. Some critical tests, such as the fifth-grade writing SOL, were recently jettisoned. And now state education officials are in the final stages of adopting regulations that would overhaul how schools are accredited. The board would widen a loophole to allow for “locally awarded verified credits” from the local school board in lieu of exam passage. Officials argue there is the need to broaden the lens by which schools are judged. We agree that student growth and closing the achievement gap should be recognized, but the proposal tilts too far toward letting schools off the hook for their failures. The emphasis appears to be not on actually improving schools but rather on approving how they appear.

Does democracy die in darkness or not? The news article, which reads like an editorial, says no. The actual editorial page says yes. Readers say, “wtf?”

Here’s a snapshot on Virginia, from federal data courtesy of NAGB, if you think these 8th-grade math and reading outcomes (and pay attention to the gaps) are good enough then, yes, you should oppose this. If not, let’s see if there is a bipartisan center for a meaningful school improvement package touching on the various dimensions of this problem from finance, to accountability and support, and yes, hopefully, more choices for families. 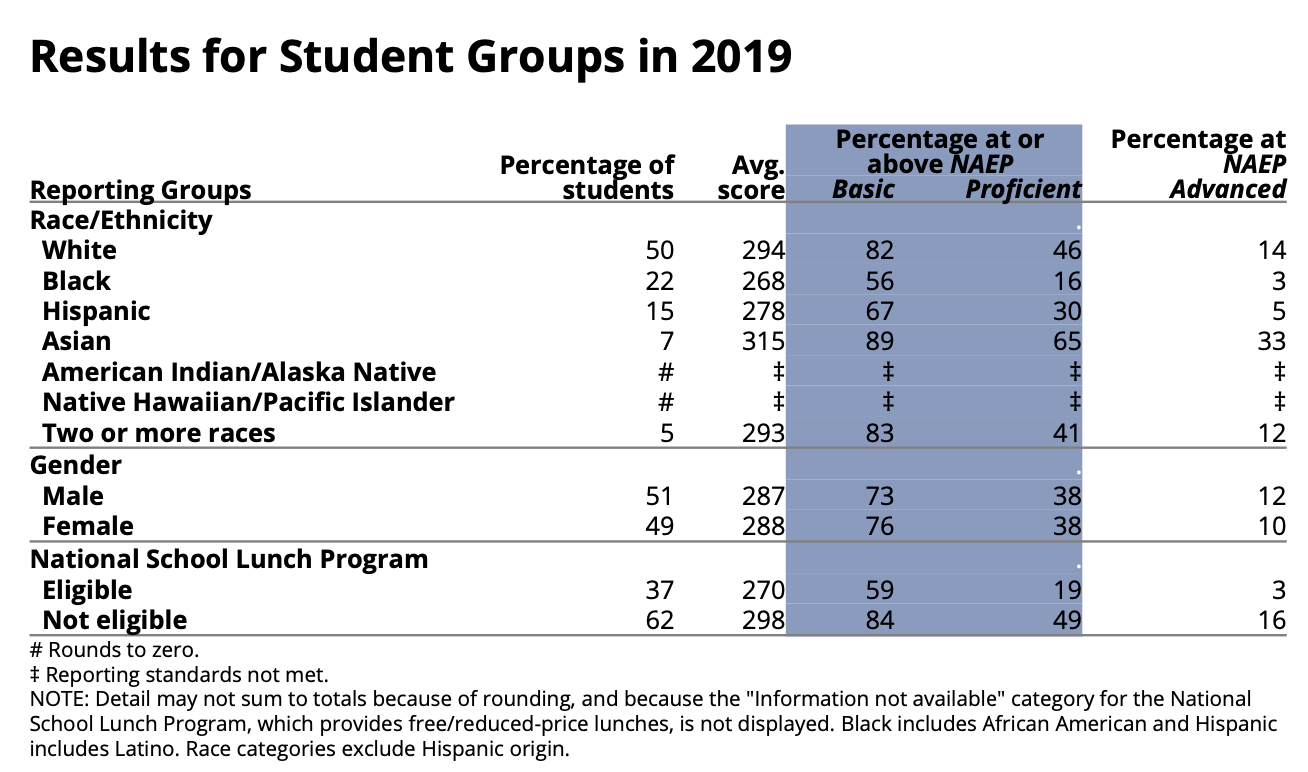 This is Virginia 8th-grade math. Decide for yourself.

Elliot Regenstein (who has a new book coming!) reached out about early education and its lack of prominence in the report. His note is brief but covers a lot of ground. I asked him if I could publish his feedback, he graciously agreed:

The new Our Commitment to Virginians report makes some very important points about student proficiency in the Commonwealth – both the need to improve overall proficiency, and to think differently about how proficiency rates are developed and talked about.  The Youngkin Administration is to be commended for expressing a commitment to improving student outcomes. As the conversation continues, it will be important for Virginia to wrestle with an important question: when kids are not proficient in middle school and high school, how did they get there?

-Many kids were falling behind even before kindergarten started. Data on kindergarten readiness showed that roughly two of every five entering kindergartners were “not ready.”

-Schools were not able to catch kids up when they were behind. In fact, 93% of students in Virginia attended schools in districts where – in the aggregate – students were losing ground over time on the state’s proficiency benchmarks. (Virginia’s data is unusual in this regard, and that may be related to the “honesty gap” identified in the new report; having very inclusive standards for proficiency may make it harder to show growth.)

This data suggests that there must be two prongs to any strategy for improving proficiency in Virginia. One is to work with schools to help them improve student growth, and in turn proficiency; regardless of how the state defines proficiency, there’s clearly a need to help schools improve (as there is in every state). But the other is to improve kindergarten.

While Virginia’s recent governors have been strong supporters of early learning, historically Virginia has been a laggard when it comes to state early childhood funding.  Pre-pandemic its state-funded preschool program served a lower percentage of children than any of the states it borders, with lower-per-pupil spending. But the state has been working diligently to improve early childhood outcomes, including a strong focus on improving the quality of teacher-child interactions. That work is really important for children in the first five years of life, and probably also offers some important lessons for the state’s K-12 system. If Virginia is serious about a long-term strategy to improve student outcomes, the pre-kindergarten years are a critical opportunity that must be addressed.

Co-founder of Bellwether Education Partners, Rotherham has served on the Virginia Board of education and now serves on the board of the Curry School of Education Foundation at the University of Virginia. This column and the follow-up posted below have been republished with permission from Eduwonk.

This entry was posted in Education (K-12) and tagged Andrew Rotherham. Bookmark the permalink.