The Hard Truth about Virginia Schools 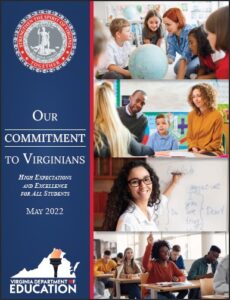 Virginia’s public schools, once among the best in the nation, are slipping badly. Some of the learning loss can be attributed to school closings driven by the COVID-19 epidemic, but the slide began several years before, when education leaders began lowering standards. And despite a relentless focus on “equity,” the racial achievement gap is getting worse.

So concludes a report issued this morning, “Our Commitment to Virginians: High Expectations and Excellence for All Students,” prepared by Jillian Balow, Virginia Superintendent of Public Instruction.

The bulk of the report is devoted to documenting the seldom-acknowledged reality that educational outcomes in Virginia are deteriorating. “We need a clear understanding of where we are right now,” said Education Secretary Aimee Guidera in a press briefing before the official release. The report, she said, presents “a sobering picture.”

Bacon’s Rebellion will present the data behind that conclusion in this post, and then describe how the Youngkin administration intends to address the challenge in a follow-up post.

Central to the report is a concept called “the honesty gap,” a metric popularized by a nonprofit organization, Achieve Inc., to express the gulf between state and federal measures of student proficiency in math and English. According to Virginia’s Standards of Learning (SOL) tests, 75% of the state’s 4th graders are proficient in reading. But according to the National Assessment for Educational Progress (NAEP) — the “gold standard” in educational testing — only 38% are proficient, a gap of 37%. The discrepancy is even wider for Blacks and Hispanics: 45%. 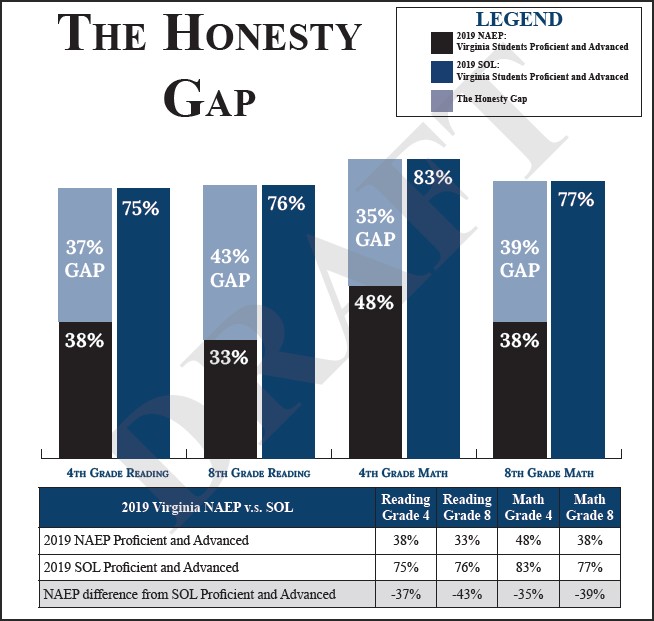 This gap shows the discrepancy between the percentage of students in Virginia and the U.S. who score “proficient” in state and national assessments. The high Virginia percentages reflect lower standards.

Virginia is one of only three states in the country — Georgia and Arkansas are the others — where the honesty gap exceeds 20 points.

“We’ve been telling parents, taxpayers, and teachers that our kids are prepared and OK when they’re not,” Guidera said. “We have to get the truth out to people.”

Virginia was one of the first states in the country to enact tests to measure student academic achievement in the 1990s, and it consistently bolstered standards through Republican and Democratic administrations for 20 years. The commonwealth developed a reputation as having one of the strongest systems of public education in the country, although the overall performance did mask severe achievement gaps in high-poverty schools. A sea change occurred in 2017 when the State Board of Education, motivated largely by equity considerations, lowered “cut” scores, or the number of correct answers it takes to demonstrate proficiency, for the Standards of Learning tests.

In the estimation of the Youngkin administration, lowered expectations and relaxed standards have contributed to a general decline in achievement along with widening gaps between racial groups. States the report: “Virginia is losing its national standing.”

The following charts show how Virginia has the lowest proficiency standards of all the 50 states and Washington, D.C., as determined by NAEP. 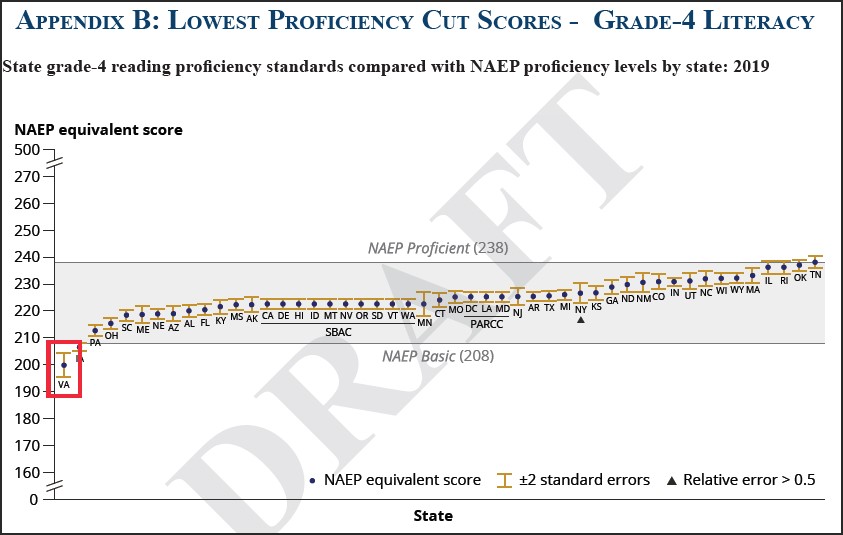 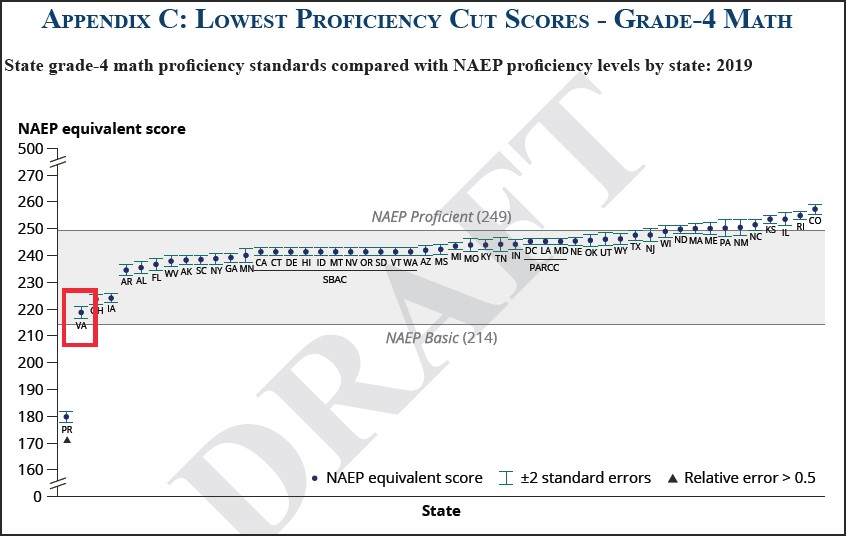 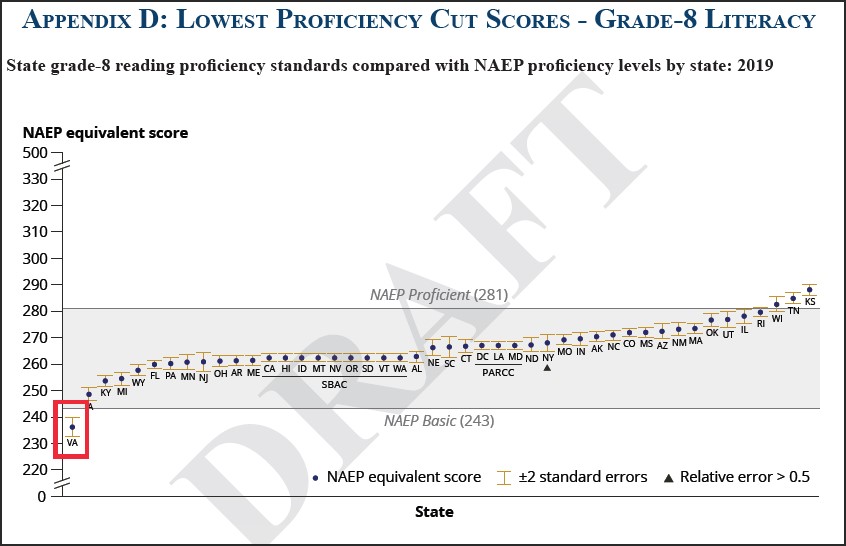 While Virginia students fared better in the 2019 NAEP assessment (the most recent year the national tests were administered), the margin of superiority shrank considerably in reading compared to previous years, as can be seen in the following two charts. (Virginia’s lead narrowed less dramatically in math.) 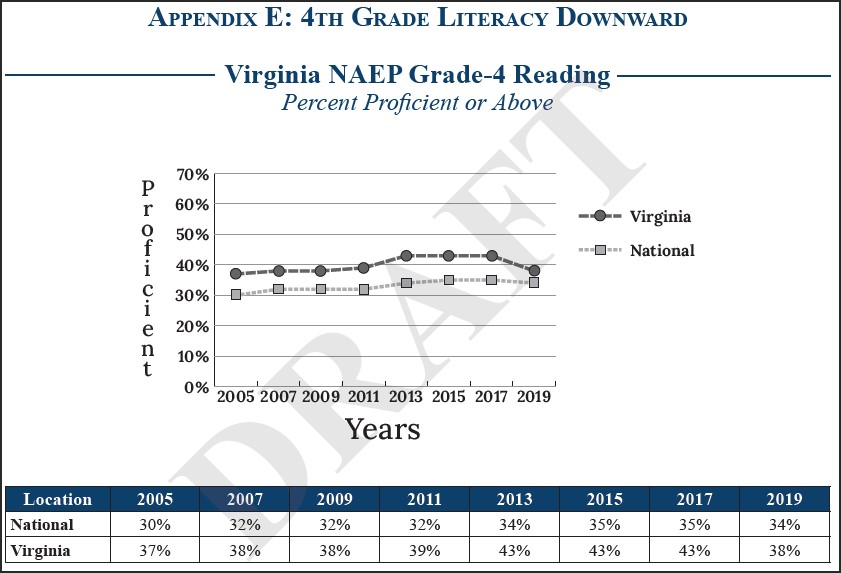 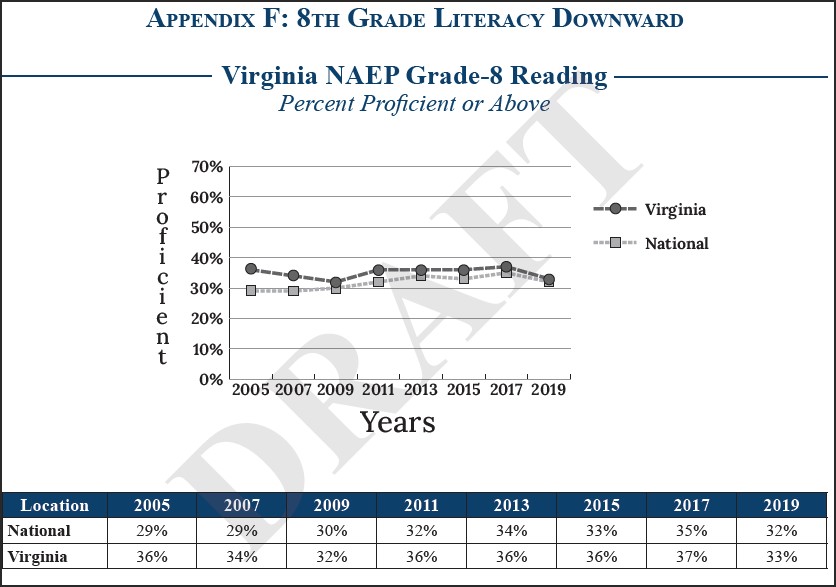 The NAEP data indicates that the erosion in performance was well underway before the COVID pandemic struck. The response to that event accelerated the downward trends. Virginia schools turned to remote learning instead of in-person learning to a far greater degree than other states. Virginia students received in-person instruction for 9.7% of the school year on average, the lowest of eleven states studied in one survey.

Schools administer a test to elementary school students, the Phonological Awareness Literacy Screener (PALS) in the fall and winter, to see how they are progressing during the year. Those scores have been in decline since 2016, but they plummeted during the pandemic, and in most cases failed to recover even when students returned to in-person learning in the current school year. 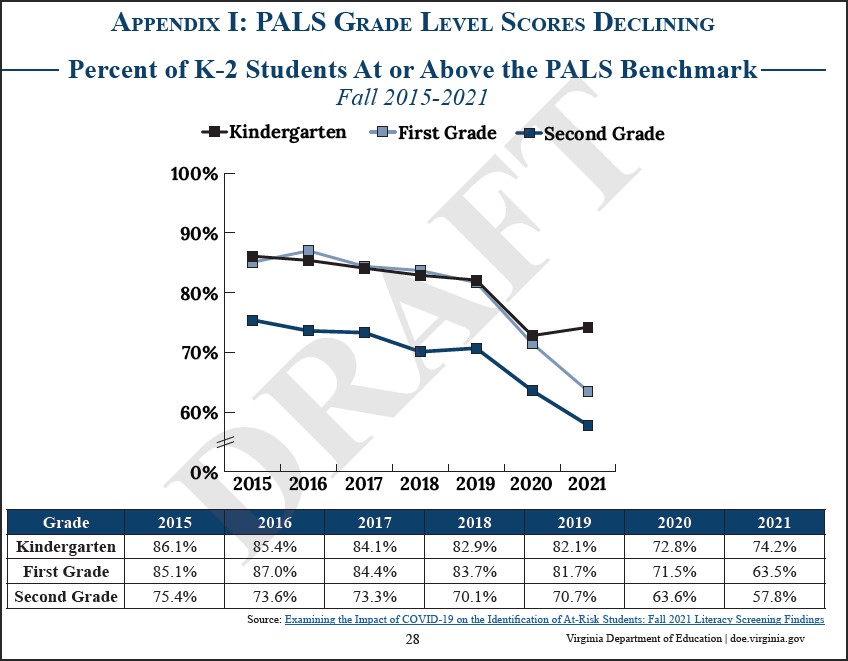 Another way of measuring progress through the school year is the Multi-Tiered Systems of Support (MTSS). The chart below shows the percentage of students reaching the math benchmarks. Between the winter of 2020-21 (midway through the school year) and the winter of 2021-22, the percentage of Virginia students above the benchmark declined 9% compared to a modest 2% decline nationally. 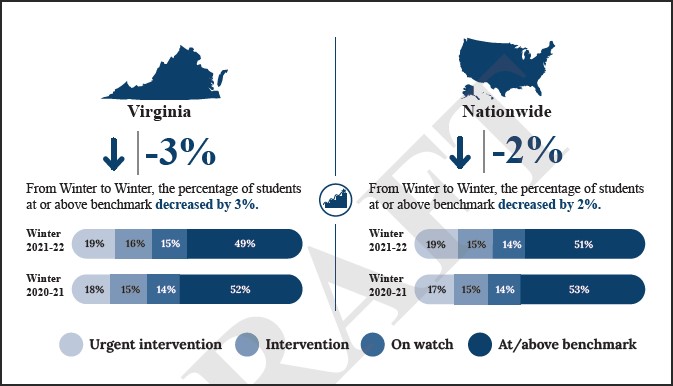 The trends have been discouraging in upper grades as well, as measured by average SAT scores and ACT scores. Those college readiness scores have also been declining in Virginia, although comparisons are tricky because the percentage of students taking those tests varies significantly from state to state and year to year.

While the full magnitude of Virginia’s educational crisis has not been publicized — mainstream media have mostly ignored this data (even as Bacon’s Rebellion has been studiously tracking it) — many parents sense the changes and are “voting with their feet,” the report notes. The number of home-schooled students jumped from 38,000 in the 2019-20 school year to 60,000 during the COVID-fueled year of 2020-21.

The Virginia Department of Education will compile the performance data and share it with local school officials, teachers, parents and students. The Youngkin administration, said Guidera, is committed to making Virginia’s public education system “the most transparent and accountable in the nation.” Only in that way can Virginia hope to reverse the slide.