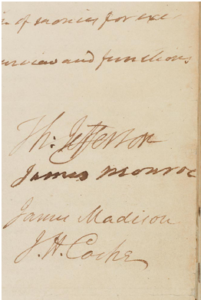 Signatures from the first meeting recorded in the Minute Book of the UVa board of visitors, May 5, 1817 – ALBERT AND SHIRLEY SMALL SPECIAL COLLECTIONS LIBRARY, UNIVERSITY OF VIRGINIA

Much has been made of a recent request by Governor Glenn Youngkin to eliminate a tuition increase at the University of Virginia and the Board’s decision not to honor it.

The tensions between means and ends that have to be resolved in producing a budget at any large and complex university are enormous.

A central RCM budget product is thus fragile, in that changes have far reaching effects unpredictable at the board level. The later the changes, the bigger the disruptions.

The Governor’s request, while appropriate to his goal to help parents deal with inflation, arrived just before the start of the fiscal year. The board judged it to be too late to be accommodated.

This is the story of the budgeting process that drove that decision and why the endowment could not be used to fund the difference.  I think elements of this may prove be informative to all who send their kids off to college.

Investigation. The University of Virginia is a large and very complex business. I have made a deep dive into the UVa Board’s budget funding options by researching publicly available records and conducting an interview with a person close to the matter who asked not to be named.

How much money is involved? The 4.7% tuition hike is the headline number for in-state undergraduate tuition. This is the number that is politically sensitive.

The state’s major universities have greater flexibility with out-of-state undergraduate tuition, as well as graduate tuition and (to a lesser extent) fees and room rates.

Lowering in-state tuition without a corresponding change to out-of-state, which starts out far higher, is unfair to those students and their families. Lots of them are economically disadvantaged students on fixed scholarships.

A ballpark estimate of the magnitude of a 4.7% change in the published rates for all tuition, in state and out, would be as much as $25 million.

Why was it not honored? Start with the proposition that the University itself must deal with inflation in the economy.

The process of making inputs to that budget is itself complex.

In the previous five years, UVa tuition was either frozen or increased at very low rates. In aggregate over that period UVa tuition was negative relative to CPI and deeply behind the higher ed inflation index.

In any business if revenues do not keep up with inflation and expenditures are not reduced accordingly, the gap between revenues and expenditures multiplies over time, like compound interest in reverse. By December of 2021 the gap at UVa had grown to the point that the Board felt compelled to raise tuition.

The need to prevent this inflationary hole getting any deeper made the board judge it imprudent to roll back the increase just days before the start of the fiscal year and 60 days before the bills go out.

On the RCM model, financial commitments both within and outside the university had been made between January and the end of June. By June most faculty have been hired, contracts have been renewed, and major projects have been scheduled.

But the working period for the FY 23 budget was very unusual. In any single budget year, the budget must anticipate inflation. This budget year the inflation projection was the most difficult in four decades.

So the Governor’s request looked entirely different in June that the assumptions under which the 4.7% tuition increase had been promulgated in December.

Governors appoint boards to make tough calls.  It looks like they made a good one.

No major business can keep its price increases below the rate of inflation for years and thrive, or a least stay in business?

The request from the Governor to scrap that hike was well reasoned, but the Board felt it came too late to act upon.

UVa’s endowment contributes more to operating the academic enterprise than the state does — 8.5%. This 8.5% is an aggregate of thousands of smaller distributions from individual, restricted endowment accounts, each of which is earmarked for a specific purpose.

For example, it includes the salary for an endowed professor in the Chemistry Department, the athletic scholarship for a woman basketball player, and the annual grant to a doctor researching diabetes.

It is a wide-spread misconception that the $14B “endowment” is a singular pot of money that is readily available for general operations.

In legal fact, virtually none of the capital is available for discretionary spending.

Five years ago there was a great outcry when the board rounded up all reserves in every corner of the institution, most of which would have been classified as “working capital” on the books of a corporate enterprise. All these reserves were placed in a single, temporary “Strategic Investment Fund” (SIF) designed to throw off an annual income of $75-100M.

The board limited the purposes for which even those SIF funds might be used.
The principal or capital of these investments, which earns a much higher return as pooled capital invested by the University of Virginia Investment Management Company (UVIMCO) than they did in dozens of checking accounts, is inviolable, and can only be spent for the benefit of the original source.

For example, about 30% of the SIF capital is working capital that was contributed by the Health System which could withdraw that capital in the event of catastrophic need (like the COVID months of April and May ’20 when operating losses were running $75M/month).

The SIF’s annual income is under the control of the BOV, which has delegated some discretion to the Provost and President for operational decisions. The board has approved allocations to large areas in the Universities Strategic Plan, and then, following the Board’s guidance, the Provost and President may decide which of several competing applications for engineering research will get funded in a given fiscal year.

This process results in virtually all of the discretionary SIF income being committed well in advance to strategic plan initiatives like the Democracy Institute, improvements to career counseling, and growing UVa’s research portfolio.

Note that all Federal grants come with requirements that the research institution provide lab space, interns, equipment and other cost-sharing support. No federal grant comes without a cost to the recipient.

There is no generally available income from the endowment. It is all pledged to specific purposes.

If UVa were to divert funds that a family had donated to support the study of neurobiology to lower the tuition for a middle-class family from Grundy, the University would get sued.

Bottom line. This is not just a UVa story.

It is important to understand university financial management systems and planning horizons to understand both their late-stage flexibility and what constitutes late-stage.

If the board controls line item expenditures, which it may at some universities, it can make line item changes with perhaps later notice than can UVa.

I support UVa’s RCM system because it makes the individual schools and department heads accountable. But it also lengthens the notice required to make budget changes.

The Governor’s request in this case was justified in his attempt to help families with inflation. He put the decision in the hands of appointees who are there to make them.

At UVa, the board judged it as just too late to accommodate under conditions of generational inflation.