The “Divisive Concept” Wars Have Begun 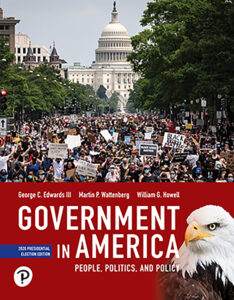 The Williamsburg-James City County School Board was due to adopt new texts this spring for its AP U.S. Government and Politics course, as well as other social studies classes, for use next fall. As reported by The Virginian-Pilot and Virginia Gazette, these deliberations may be an indication of how the Youngkin administration’s determination to eliminate “divisive concepts” may play out at the local level in the near future.

After reviewing several textbooks, the selection committee recommended the adoption of the updated version of the text currently being used in AP government classes. It is the 18th edition of Government in America, by George Edwards, a political science professor at Texas A&M University. The previous edition is on the College Board’s example textbook list. The textbook had been vetted by the Virginia Department of Education and pre-approved.

When the question of the adoption of the textbook came up at the April meeting of the school board, four people spoke against the book. There were also 26 written responses to the books that had been made available to the public to review. Those criticizing the AP government textbook focused mostly on the book’s cover, which included a photo of a Black Lives Matter protest outside the U.S. Capitol. Signs in the crowd in the photo read “Silence is violence” and “No justice no peace” and “Stop Killing Black People.” There were complaints that the textbook promoted “divisive teachings.” One man complained to the board about an excerpt in the book that discussed President Joe Biden’s election policy goals.  One individual wrote, “I would not even consider a textbook that features a BLM agenda on its cover.”

The school board rejected the AP government textbook on a 4-3 vote. Although he found nothing wrong with the overall content of the textbook, the chairman of the school board said that he voted against its adoption because it had sparked controversy and might cause “community division.”

Surprised by the opposition, one board member who had voted against the textbook took time after the meeting to review the textbooks. At a board work meeting a couple of weeks later, when the issue of the textbooks was discussed again, she explained that she had voted against adoption earlier in order to have more time to review them. Admitting that she would have preferred a different cover for the AP government textbook, she said that, nevertheless, after reviewing all the books under consideration, she felt that Edwards’ Governing in America was the most appropriate for students. After hearing comments from the public both opposing and in support of the textbook, the school board reversed itself, voting 4-3 to approve the book.

In a somewhat similar vein, at the May 17 Williamsburg-James City School Board meeting (the taping of meetings and their later availability is really a boon to researchers), several parents spoke regarding the adoption of the concept of Social Emotional Learning (SEL) by the school system. At least two parents enthusiastically endorsed the program, relating the benefits realized by their children. Another said that he wished the program had been in place when his son was in school. However, another woman, saying that she had raised three children in the school system, objected to its use. Citing the Code section that declares that it is a parent’s fundamental right to make decisions about the child’s education, as well as the election of Youngkin as governor, she complained that those parents that objected to SEL were being denied their right to “have a say in their children’s education.”

The implication of these comments and events is that some people feel that, if they object to a policy or book or whatever, that automatically makes it “divisive” and, thus, should not be adopted or followed. That way, they win.

This entry was posted in Culture wars, Education (K-12) and tagged Dick Hall-Sizemore. Bookmark the permalink.