The Death of Common Sense and the Child-Care Shortage 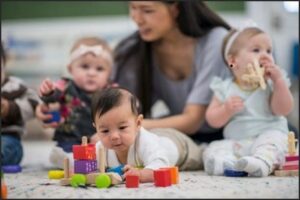 Simone Martinez began searching for child care four months into her pregnancy. When her baby Zelaina was born, she still hadn’t found a provider, Cardinal News tells us. “I was debating quitting my job even though we really can’t afford it,” she said.

Hundreds of families are on waiting lists in Southwest and Southside Virginia, says Cardinal News. Indeed, child care shortages are a statewide problem — and they are causing major headaches for parents.

Forty-seven percent of Virginia residents live in child care “deserts,” defined by the Center for American Progress as areas having insufficient options. Even when child care is available, it can be so expensive — equivalent to private school tuition — that it makes sense for many parents, usually mothers, to drop out of the workforce and stay home. In 2021, 44,000 Virginians made career sacrifices because of child care issues, according to the liberal-left think tank.

In the minds of many, every social problem calls for a government “solution,” which means Mo Money from taxpayers, and day care is no exception. The Cardinal article quotes multiple people calling for bigger government subsidies. “If we don’t have continued investment and subsidies from the state and federal government,” says one provider, “the child care industry will collapse.”

No one, and that includes Cardinal News, thinks to inquire why day care is so scarce and so expensive in the first place. The usual suspects quoted in the media never ask if excessive government regulation might play a role.

Virginia day care establishments are governed by a 110-page document, “Standards for Licensed Child Day Centers.” Common sense has been replaced by detailed regulations for every aspect of the child care business. Have the regulations improved child safety? The state does keep statistics, but no one to my knowledge has bothered to do a thorough analysis. Child care follows the standard American playbook. Identify a crisis. Pass a law. Write regulations. Move on to next crisis. Ignore unintended consequences.

Virginia’s child care standards impose significant costs, starting with a heavy burden of paperwork. Every center must develop written procedures for injury prevention — which must be updated annually — addressing everything from crying babies and shaken baby syndrome to safe sleeping practice and Sudden Infant Death Syndrome (SIDS). Similarly, written playground safety procedures address, among other items, the “positioning of staff in strategic locations” to scan play activities and circulate among the children. Centers must maintain extensive files on each child, including “a written record of daily attendance that documents the arrival and departure of each child in care as it occurs.”

Next, child care centers must abide by strict licensing requirements for employees. Common sense would dictate that employees be checked for past criminal or child-abuse activity and to make sure they are not disease carriers. But child care is not something the state will permit to simply be learned on the job. Employees must possess appropriate academic credentials. Thus, to pick one example, “program directors” must possess a graduate degree in a child-related field (education, nursing or recreation) and six months of programmatic experience, or a B.A. degree and a full year of programmatic experience. All staff must complete a minimum of 16 hours of training annually.

The state also regulates facilities. Common sense would dictate that buildings meet fire codes and be served with water and sewer. But the state has declared that indoor temperatures must be maintained at least 68°F and no higher than 80°F, and, in its infinite wisdom, sets minimum square footage requirements.

Let us not forget that centers also shall have a least one toilet and one sink per 20 preschool children and one per 30 school-age children.

Playgrounds do not escape the eagle eyes of regulators. Playgrounds must provide at least 75 square feet of space per child at play, providing a separate area for infants and toddlers with at least 25 square feet of unpaved surface for each infant/toddler. Regulations set standards for everything from playground surfaces to swing sets and sand boxes. Regulators give considerable attention to “fall zones.”

Resilient surfacing shall comply with minimum safety standards when tested in accordance with the procedures described in the American Society for Testing and Materials standard F1292-99 as shown in Figures 2 (Compressed Loose Fill Synthetic Materials Depth Chart) and 3 (Use Zones for Equipment) on pages 6-7 of the National Program for Playground Safety’s “Selecting Playground Surface Materials: Selecting the Best Surface Material for Your Playground,” February 2004, and shall be under equipment with moving parts or climbing apparatus to create a fall zone free of hazardous obstacles. Fall zones are defined as the area underneath and surrounding equipment that requires a resilient surface.

While playground regulations test the boundaries of the absurd, the most onerous requirements are the minimum staffing ratios.

When children are in mixed-age groups, the staff ratio for the youngest age applies. Lower ratios translate into more staff and higher costs.

Some parents want nothing but the best for their children and cost is no object. But not every family can afford the gold-plated standard of child care. In assessing the trade-off between cost and safety, the challenge is to figure out which regulations generate the most safety for the buck.

The Washington Post created a great stir in 2014 when it published a series, “Children at Risk: Unregulated Day Care in Virginia,” which found that 60 children had died in Virginia day cares over the previous 10 years. Has the tightening of regulations done anything to reduce the number of deaths since then?

The Virginia Department of Education publishes a “Death and Serious Injury Database” for child care facilities. The report covering the past 12 months indicates that only one death has occurred — significantly better than the six a year average cited by The Washington Post. One can argue that regulation has had a positive effect.

But are all the regulations necessary?

Sudden infant death in unregulated day cares accounted for half of all deaths examined by the Post. Abuse by care giver accounted for nine more cases. Any rational cost-benefit analysis would focus resources on training care givers how to prevent SIDS and weed out care givers prone to physical abuse. Nothing in the WaPo database suggests, however, that regulating the square footage indoors and in playgrounds makes the slightest difference. Only in a handful of cases did the Post cite inadequate supervision due to high child-to-staff ratios.

As the day-care shortage continues without let-up, perhaps it is time to take another look at the regulations to see which ones actually serve a useful purpose in maintaining child safety and which ones are superfluous and costly. Making child care more affordable need not cost taxpayers millions more dollars in subsidies. If the Youngkin administration wants to tame the regulatory state, I can’t think of a better place to start.

This entry was posted in Children and families, Regulation and tagged James A. Bacon. Bookmark the permalink.