The Compressor Station: Another Fact-Poor Debate 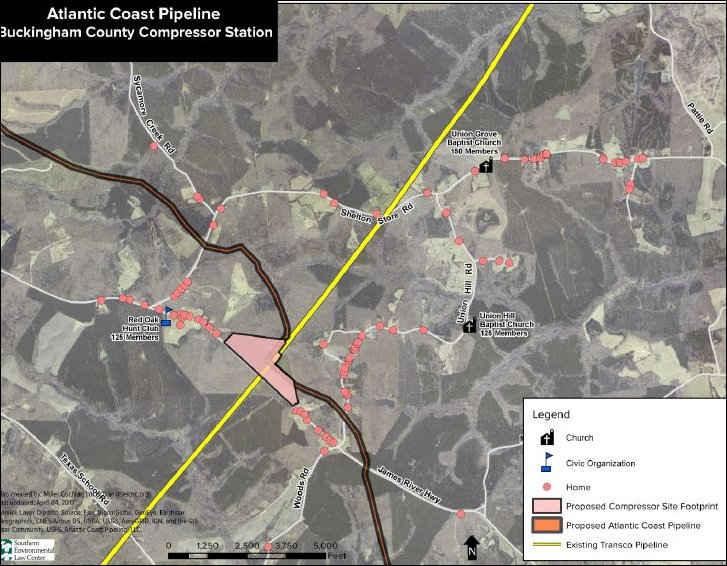 The State Air Pollution Control Board voted 4 to 0 last night to approve a controversial natural gas compressor station in Buckingham County that is crucial for the operation of the Atlantic Coast Pipeline.

Pipeline foes had argued that emissions from the compressor station would create a health hazard for nearby residents, a majority of whom, depending upon what mapping criteria are used, are African-American. This disproportionate impact upon a minority community, many contended, amounts to environmental racism.

As happens so often in such debates, there was no meaningful discussion of the level of risk associated with the project. Regardless of how tightly regulated the station is, how much pollution will it emit? And what health hazards are associated with that level of pollution — are they real or imagined? Numbers may exist deep in the bowels of the DEQ, but they have not surfaced in the public debate.

What pollutants are people worried about? The most detailed discussion I have seen comes from the Southern Environmental Law Center, which overs legal and regulatory aspects of the compressor station. The Sept. 21, 2018, letter, submitted to DEQ’s Dowd and members of the air pollution control board, notes that compressor stations, generally speaking, emit carbon dioxide, carbon monoxide, methane, nitrous oxide, volatile organic compounds (VOCs), and particulate matter. Some VOCs, such as benzene and formaldehyde, are carcinogens.

According to the letter, ACP has proposed to equip four compressor turbines with a low-NOx combustion system. DEQ proposed a limit of 3.85 parts per million applicable on a three-hour average basis. However, Dominion’s modeling analysis for the station’s air quality standards, did not account for spikes in emissions during startup, shutdowns, and sub-zero temperatures. States the letter:

The public deserves to know the maximum predicted ambient air impacts that could occur due to the Buckingham Compressor Station, and VEDQ has an obligation to ensure that [national air quality standards] will not be violated as a result of allowing the Buckingham Compressor Station to be constructed. Thus, VDEQ should not ignore the much higher NOx emissions that could occur, even if infrequently, during times when temperatures fall below zero degrees Fahrenheit.

DEQ’s analysis also is incomplete, the SELC latter argues, because “it did not consider the non-emission alternative of using electric-motor driven compressors instead of gas-fired turbines. Electric motors as prime movers for compressor stations have been recognized as a more efficient and cleaner — with zero emissions at the point of use — alternative to gas turbines.”

The letter also argued that the Dominion modeling “understates worst case impacts” for formaldehyde, and had not conducted an cumulative impact analysis of hexane.

But how dangerous is the stuff? The SELC letter puts the onus on Dominion and DEQ to prove that the compressor station is safe. SELC itself offers no analysis of the odds that Union Hill residents might suffer from breathing difficulties from NOx or the odds of contracting cancer from formaldehyde or hexane.

By way of preface, the study noted that total VOC exposures for the compressor stations represent “a hypothetical worst-case exposure scenario because they assume that the exposed person is present outdoors at the maximally impacted location 24 hours a day, 7 days a week, and 365 days a year.” Needless to say, that is a highly unrealistic scenario that applies to no one in the real world — certainly not to residents of Union Hill — and overstates the real risk.

For the region surrounding the proposed Hancock compressor station, the larger emitter of the two stations, a year of breathing air with the maximum modeled formaldehyde impact would be the equivalent to:

If the risks associated with the Hancock compressor station are roughly comparable to those of the Buckingham station, we’re talking about risks that people voluntarily expose themselves to every day. Broiling fish in an electric oven? Applying facial moisturizer? Nobody to my knowledge is agitating against electric ovens and facial moisturizer.

Still, the Gradient study does not translate those activities into increased incidence of cancer per 100,000 population or any other yardstick comprehensible to the public. Maybe spending 45 hours outdoors in New York City is a really bad idea! Or maybe the risks in the 200-resident population at Union Hill are too small to measure.

A poorly informed debate. Neither side of the debate has seen fit to present the data in a way that would inform the debate. I suspect that the pipeline foes know that the elevated risk would look ridiculously small, while Dominion is loathe to concede an elevated risk of any kind.

I am surprised that the idea of using electric-motor compressors rather than natural gas compressors never came up during the debate. I’m just speculating, but I’m guessing that pipeline foes had no interest in advancing a genuine solution to the problem. Their real goal is to kill the pipeline; their concern for racial justice is purely rhetorical and tactical. I’m surmising that Dominion didn’t volunteer the idea because it didn’t want to run the chance of delaying the pipeline project by revising the permit application and undergoing another round of regulatory hearings.

Whatever the case, in the absence of such numbers, the public is left with nothing but talking points and hyperbole. And so, it seems, were the deciders, members of the Air Pollution Control Board, who, based on press reports, never asked the obvious questions. What a shame.