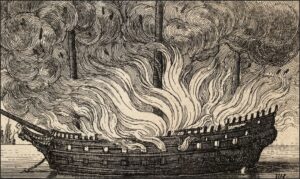 Occasionally, I get profoundly depressed about the state of our country. After surveying today’s news clips, today is one of those days.

The latest furor over the raid on Mar-A-Lago crystallizes the depraved state to which our national politics has evolved. Do we believe the version of events propagated by the people who brought us the Election-Was-Stolen narrative, or by the people who peddled the Russia Collusion delusion? Do we side with the ignorant populist demagogue and his riot-prone supporters, or with the polished, Gucci-adorned elitists who use the power of the media and organs of the state to relentlessly hound and punish their enemies?

There seems to be no escape. The pathologies of national politics are percolating into Virginia. Governor Glenn Youngkin now stands in the crosshairs. Democrats, the media, and a vast array of advocacy groups have gone into full-bore attack mode.

Today, The Washington Post  published a story about a Delaware lawsuit, filed by a Pittsburgh pension fund, alleging that Youngkin received $8.5 million in a deal that shielded him from paying taxes. It follows the now-standard formula of accusation, denial from a Youngkin spokesperson, and hyperbolic rhetoric from Democrats and/or advocacy groups.

Scott can say anything he wants without fear of correction. His chronology is off just a tad. The Carlyle Group deal, when Youngkin was co-CEO, occurred in 2020. The budget deal was negotiated this spring, in 2022. Only in the 7th paragraph of the WaPo piece, incidentally, do we learn that the lawsuit “does not allege that the activity was illegal.”

Also today, we learn from The Virginian-Pilot that Democrats and LGBTQ advocates are slamming recent remarks from Gov. Glenn Youngkin calling on educators to inform parents about a student’s gender identity or sexual orientation. The article does quote sources on “both sides” of the story, but the issue is framed to put Youngkin and defenders of parental rights on the defensive. Accusation… denials… rebuttals of the denials….

Not surprisingly, as yesterday was the five-year anniversary of the infamous Unite the Right rally in Charlottesville, consumers of news media were treated to a slew of articles exploring leftist perspectives on the event.

There were many articles, but The Washington Post article might have been the worst. The headline: “Charlottesville hired a Black police chief to heal. Then it fired her.” Racist cops on the Charlottesville police force are cast as villains… even though the cops didn’t fire her; uber-woke city officials did. The article doesn’t tell us why she was fired.

Not only are media outlets determined to keep the Unite the Right rally as fresh in the public’s mind as if it happened yesterday, as they routinely do with the injustices of the Civil Rights movement and the sins of segregation 60 or more years ago, there is the continued focus on individuals who participated in the Jan. 6 riot at the U.S. Capitol. The WaPo updates readers about a Virginia police officer from the town of Rocky Mount who received a 7-year sentence for joining the mob that stormed the Capitol.

No question, extreme right-wing violence must be decried and punished. But one would never imagine from Virginia media reports that left-wing violence was a thing. Left-wing thugs clashing with right-wing thugs in Charlottesville? What? Do you mean to say Antifa was there, too? Left-wing violence in Richmond during the George Floyd protests? Tut, tut, arson and vandalism are unacceptable, but the cause was noble, and, after all, no one died. There is no moral equivalency between left and right, you see, so the sins of the left can safely be stuffed down the memory hole.

The media are not the only ones re-writing the national memory. The leftist march through Virginia’s cultural institutions continues unimpeded. Take, for example, the reinterpretation of the lives of Thomas Jefferson and James Madison taking place at Monticello and Montpelier, detailed in a recent Heritage Foundation report. (The report also talks about George Washington and Mount Vernon, but the Mount Vernon Ladies Association hasn’t gone woke yet.) The war on the nation’s founders has multiplying fronts, ranging from the University of Virginia student guides to the board of the Jefferson-Memorial Regional Library. The ultimate aim is not merely to “contextualize” the founders, or “tell the forgotten stories of the slaves,” both legitimate goals, but to de-legitimize the founders of the republic and the entire American experiment.

Meanwhile, as the culture wars unfold, Virginia’s education system is in meltdown mode. That story has gone largely unreported, except when the media rebuts the Youngkin administration… or blames COVID. Homicide rates are surging for the third straight year… and the media blames COVID. Virginia’s higher-ed institutions are evolving into leftist intellectual monocultures, electricity prices are rising and set to go far higher, and state government spending has reached escape velocity with precious little to show for it in terms of improved government services. In Washington, we rack up endless deficits, run up an unsustainable national debt, inflate the currency, ensnare the economy in regulations and rent-seeking, and create the conditions for national collapse. Everyone loses. Except the political class.

We stand on the deck of a burning ship. The arsonists who set it afire are emptying barrels of tar and turpentine to feed the flames. And the rest of us stand by, either blind to reality or too paralyzed to act.

Sorry for the rant. I’ll be in a better mood tomorrow, I promise.