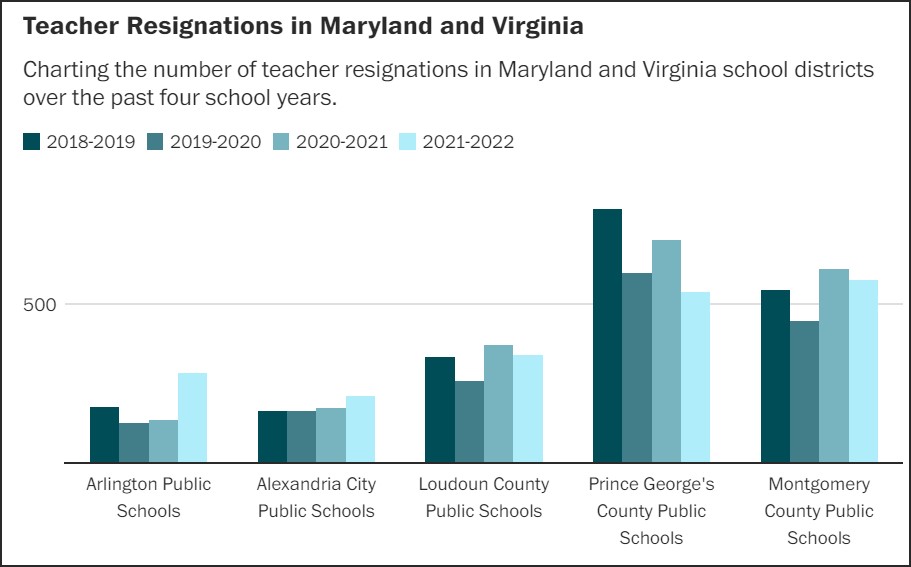 Teachers in the Washington, D.C., area, including Northern Virginia, are resigning in unusually high numbers this year, according to The Washington Post. Resignations spiked 45% in Fairfax County Public Schools and 96% in Arlington, according to the WaPo data compiled by reporter Hannah Natanson.

The surge in teachers calling it quits mirrors national trends. The WaPo article cites The Wall Street Journal as saying that 300,000 public school teachers and staffers quit their jobs between February 2020 and May 2022, representing a 3% decline in the K-12 educational workforce.

Students in more than 80% of public schools are “struggling with their behavior, social-emotional well-being and mental health,” and 50% are reporting increased acts of disrespect toward educators, Natanson says. But there’s more to it, says Kimberly Adams, president of the Fairfax Education Association. As the WaPo summarizes her thinking:

Some teachers are also leaving because they are tired of the ongoing debates over how American schools should teach about race, racism, U.S. history, gender identity and sexual orientation. Parents across the country are pushing for greater involvement in their children’s education, including oversight of lesson plans and curriculums, and many regularly attend once-sleepy school board meetings to share their displeasure.

“I think it’s a perfect storm,” Adams said, referencing the combined effects of pandemic-induced exhaustion, a jump in student misbehavior and parental anger over the management of public education. “A lot of people are just saying, ‘I can’t do this anymore,’ and telling us they would rather have a job where they feel valued.”

She added: “Teachers are just feeling attacked by the public on every front. I don’t think we’ve heard enough from the people who support us.”

Ah, yes, conservative parents are to blame! Public schools have undergone a veritable revolution in their approach to race, transgenderism and other contentious issues, parents are paying more attention to what their children are being taught, and some are making emotional statements in school board meetings. The problem isn’t what’s happening in the classrooms, it’s what’s happening at school board meetings!

Or maybe not. Natanson’s data undercuts Adams’ proposition. Literally nowhere in the country has the culture-war fire burned more intensely than in Loudoun County. If teacher objections to parental interference were a root cause of the mass resignations, it would show up here. But resignations are up only 6%. Of the seven Virginia and Maryland localities surveyed, only Prince George’s County in Maryland, where resignations declined 23%, fared better.

Natanson’s article points to teacher burnout resulting from the transition from COVID-driven remote learning back to in-school learning. Naturally, the teachers unions aren’t interested in highlighting this factor — they were the prime instigators of the shift to remote learning in the first place.

According to Natanson, many students lost ground both academically and emotionally during their year away from school. Students had to get re-acclimated to classrooms, discipline eroded, and administrators micro-managed teachers in trying to help students make up for learning losses. The teaching job has become more frustrating and less rewarding.

One important factor is missing from the article — the sea change in disciplinary policies over the past several years. In an effort to reduce the supposed school-to-prison pipeline, school systems have made significant efforts to reduce traditional punishments such as suspensions in favor of a more therapeutic, let’s-hold-hands-and-sing-kumbaya approach. Under the social-emotional learning model, teachers are expected not only to teach but to perform what amounts to personal counseling. Establishing personal bonds with students has always been part of the teacher’s job, but the new regime places increased demands on the profession.

Another important aspect of the resignation surge goes unexplored. The resignations are highest in high-poverty schools where learning loss and disciplinary issues are worst. In the past, teachers in high-poverty, high-stress schools sought transfers to schools or school districts with a better teaching environment. My sense is that not enough jobs are opening up in the “better” schools to accommodate teachers fleeing the high-stress schools. So, teachers are just quitting. Reporting numbers on a district-wide basis obscures this discouraging reality.

What happens to high-poverty schools that experience a high rate of resignations? Remaining teachers get saddled with more students, which leads to more burnout… and more resignations. Predictably, academic achievement suffers. There are indications that high-poverty schools are undergoing an unstoppable, chain-reaction meltdown. If Natanson’s article accurately reflects the thinking of the Northern Virginia educational establishment, there is no sign that anyone comprehends what’s happening.