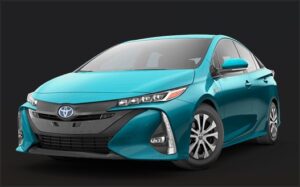 The Toyota Prius jump-started the EV era, but the Prius Prime PHEV version no longer qualifies for Federal tax credits because final assembly is not in America.

Apparently, the IRA’s eventual passage was no surprise: the handwriting was on the wall. Many southern states — including Virginia’s key competitors of North Carolina, Georgia, Alabama, Mississippi, Tennessee, and Texas — have been busy constructing new electric vehicle (EV) and lithium battery assembly plants. In hindsight, the construction activity was probably anticipated to comply with Congress’s new made-in-America rules.

Those Southern states (sans Virginia) are now dubbed the  “EV Battery Belt.” Why has Virginia not grabbed a bigger slice of this economic pie? Have we been asleep at the wheel? Or did we just let the “Tesla autopilot” take over?

But for now, I would like to focus on the practical aspects of buying a new electric car in Virginia. Many consumers in today’s new car market were blindsided by the sudden impact of the new rules.
Some cars will no longer qualify for the (up to) $7,500 federal tax credit. This includes popular plug-ins such as the Toyota Prius Prime and RAV4 Prime, the Hyundai IONIQ and Kona, and the Kia Niro. The IRS “transition rule” will disallow the tax credit for non-USA plug-ins except for those in binding contracts as of 16-August-2022, the day that President Biden signed the new Bill into law.

In all, tax credits were abruptly cut off for all but about 16 of the 65 plug-in models on sale in the U.S. market. You might ask, what plug-in vehicles still do qualify for the Federal tax credits?

Enter the Department of Energy, which has provided a list of Model Year 2022 and early Model Year 2023 electric vehicles that tentatively meet Congress’s new requirement of final assembly in America.

The “good” news is, starting in 2023, several popular Tesla and General Motors EV models will once again qualify for substantial subsidies, subject to some limitations. The plot thickens in 2024 when the subsidy starts depending on the “USA” (non-China) content of the lithium battery pack.

Also starting in 2023, for the first time, used EVs will qualify for a $4,000 tax credit. But only for buyers in lower income brackets and for cheaper, used EVs costing less than $25,000. Given those limitations, the used car EV rule is not currently expected to significantly impact sales.

I will  continue to follow this issue. Meanwhile if you are considering a plug-in purchase, and if you have a question, I will respond in the comments.

This entry was posted in Energy and tagged Bill Tracy. Bookmark the permalink.