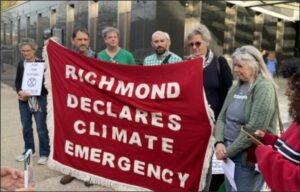 Environmental activists in the City of Richmond aren’t happy with Mayor Levar Stoney’s proposed budget. The City’s Draft Climate Equity Action Plan sets a goal of reducing greenhouse gas emissions 45% by 2030 — and reaching net zero by 2050 — but Stoney’s budget plan doesn’t provide funding for conversion to electric vehicles, increasing the city’s urban forestry staff, or phasing out natural gas, as environmentalists would like.

“If we are truly serious about this master plan that puts environmental justice at the forefront, we need to put our money where our mouth is,” said Elle De La Cancela, an organizer with the Chesapeake Climate Action Network, as reported by Virginia Public Media.

“Our funding is not limitless, and we have many priorities in the city,” retorted Stoney spokesperson Jim Nolan in an email. “We have to provide funding for public education, affordable housing and homelessness, basic city services like sanitation and street cleaning, parks, clean water, all of the above.”

This is one of those rare occasions where I side with Stoney. As mayor, he has to consider the interests of a wide range of constituents — not the least of which include the city’s low-income minorities. Murders are up. Schools are melting down. Surging rents are intensifying the homeless problem. And, oh, by the way, the taxpayers paying for all this would like to maintain a modicum of city services like sanitation, pothole-free streets, litter-free parks and the like. The last thing Stoney wants is to preside over an exodus of middle- and upper-income taxpayers from the city.

While environmental activists are pushing for the city to shut down the city’s natural gas utility, Stoney’s budget would invest in it. The utility’s proposed capital improvement plan identified $100 million for the installation of new gas lines and system replacement over the next five years.

“To invest in more fossil fuel infrastructure now would be madness,” said Bill Muth, whom VPM describes as a “resident and advocate.”

As Stoney outlines in his proposed budget document, his priorities are:

A noticeably lacking priority is:

Far from “defunding the police,” Stoney proposes jacking up spending on “public safety and well being” from $133 million to $154 million — an increase of $21 million. Apparently, Stoney is more concerned about the spike in murders in the city’s lower-income neighborhoods than achieving a barely detectable reduction in CO2 emissions. He also proposes boosting spending on schools from $192 million to $207 million, an increase of $15 million. Lack of funding is not what ails the school system and more money is not the solution, but it is understandable that Stoney would want to prioritize the schools, given their calamitous condition.

Against these competing priorities, VPM quotes United Nations General Secretary Antonio Guterres as saying the earth is “firmly on a track toward an unlivable world.”

On a more prosaic level, the article quotes Muth as saying that Richmond’s longer summers are resulting in four times the number of Lyme disease cases and a “great increase” in asthma, putting student athletes, the elderly, pregnant women, and outdoor workers at greater risk. “A 6-year-old child living in Richmond right now will experience to to 36 times more extreme heat waves than her grandparents,” he says.

Aha! Something that can be quantified and measured. Let’s look into the particulars of Lyme disease and asthma.

Here are the Centers for Disease Control’s most recent stats for the incidents of Lyme disease in Virginia. 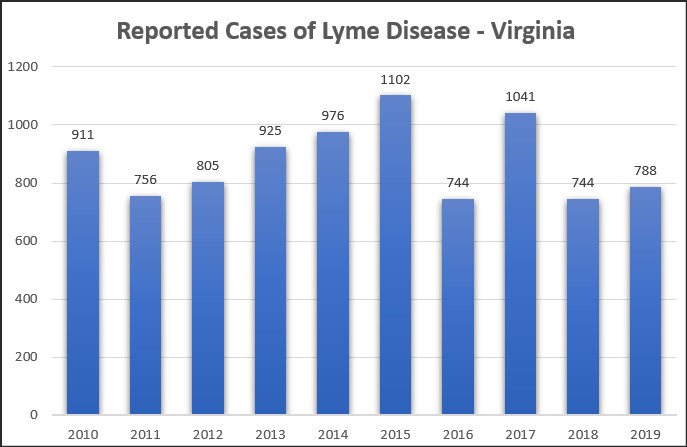 There is no increase. There was a brief media scare a few years ago based on the swelling numbers of cases reported through 2015. Perhaps Muth is drawing from those reports. But the surge was temporary, and the number of reported Lyme  cases was no larger in 2019, the most recent year for which the CDC publishes data, than it was a decade ago. Not surprisingly, the media never bothered to report back and tell readers, hey, remember that Lyme disease scare we told you about a few years ago? Forget about it. There’s nothing to it.

(There is a reasonable concern that the Lyme disease numbers are under-reported because the symptoms are so varied and the disease often goes undiagnosed. But that would have been just as true in 2010 as in 2019, so that doesn’t buttress that Lyme is seeing a dangerous increase. Perhaps Muth has access to different numbers. If he does, I’d like to see them.)

The latest data I could find does indicate an uptick in the incidence of asthma in the Richmond MSA. The level stayed flat around 9% of adults between 2010 and 2018, and then jumped up in 2019 and 2020. Asthma can be triggered by a range of environmental factors from mold and dust mites to tobacco smoke and pests. One factor, related to climate change, is the ground-level ozone level. In theory, as temperatures rise, ground-level ozone can rise, which in turn can trigger or aggravate asthma symptoms. 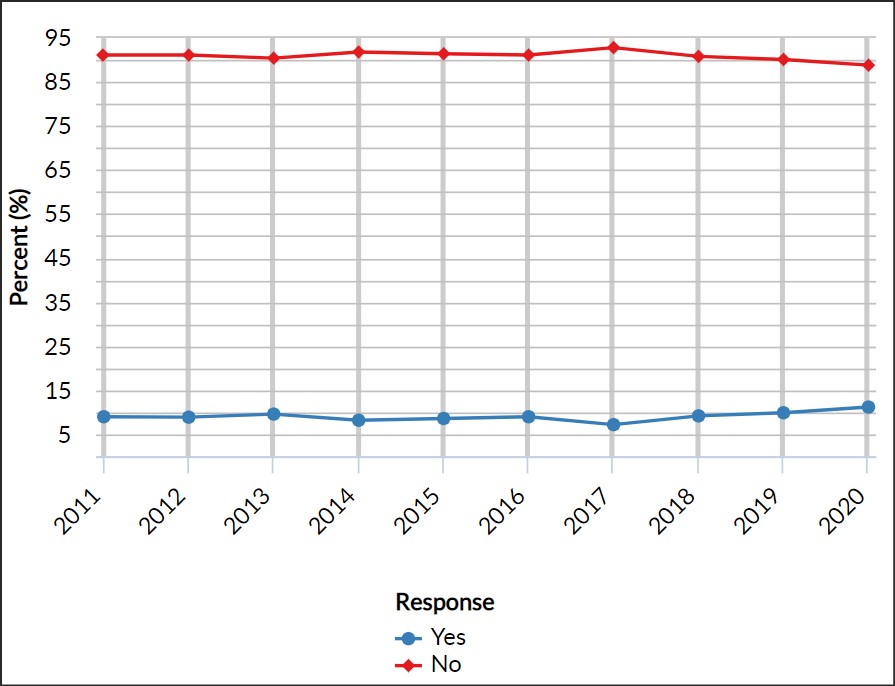 Percentage of adults in the Richmond MSA who said they currently have asthma. Source: Behavioral Risk Factor Surveillance System.

I could not locate ozone figures for the City of Richmond, but I did locate some American Lung Association numbers for Henrico County, which is part of the same MSA. Here it is: 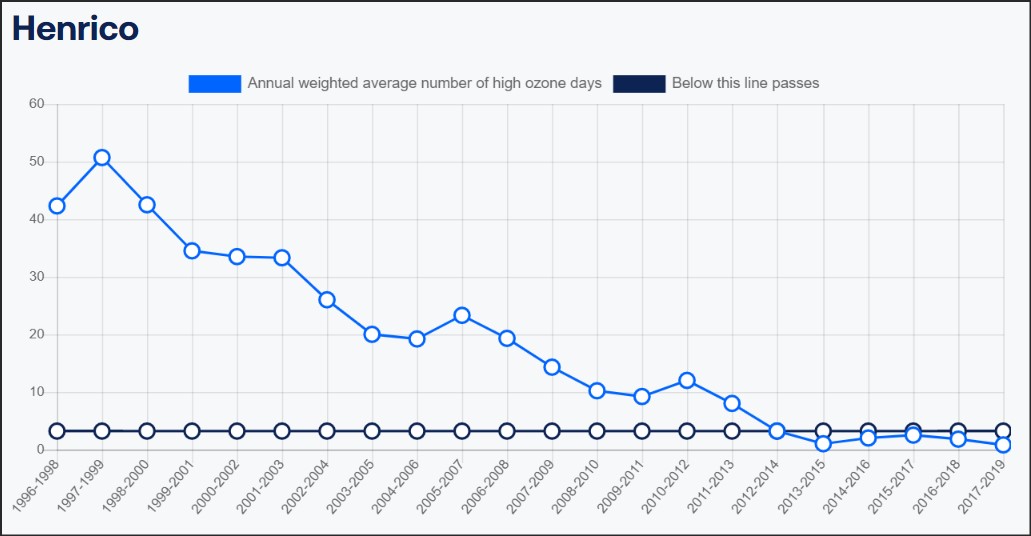 Ozone air quality in Henrico County has improved dramatically since 1996, when it truly was a problem, and has remained at historically low levels for several years. While air quality in the Richmond MSA got better, asthma cases inched up. I’m dubious there is a meaningful connection between climate change, ozone levels, and asthma.

Bacon’s bottom line: I’m not saying that the money in Stoney’s proposed budget will be well spent — in fact, I’m pretty sure a lot of it will be wasted. But his priorities are sound. The mayor wants to steer money to where the need is greatest, not to frivolities like electric cars and urban foresters.

This entry was posted in Budgets, Environment, Uncategorized and tagged James A. Bacon. Bookmark the permalink.