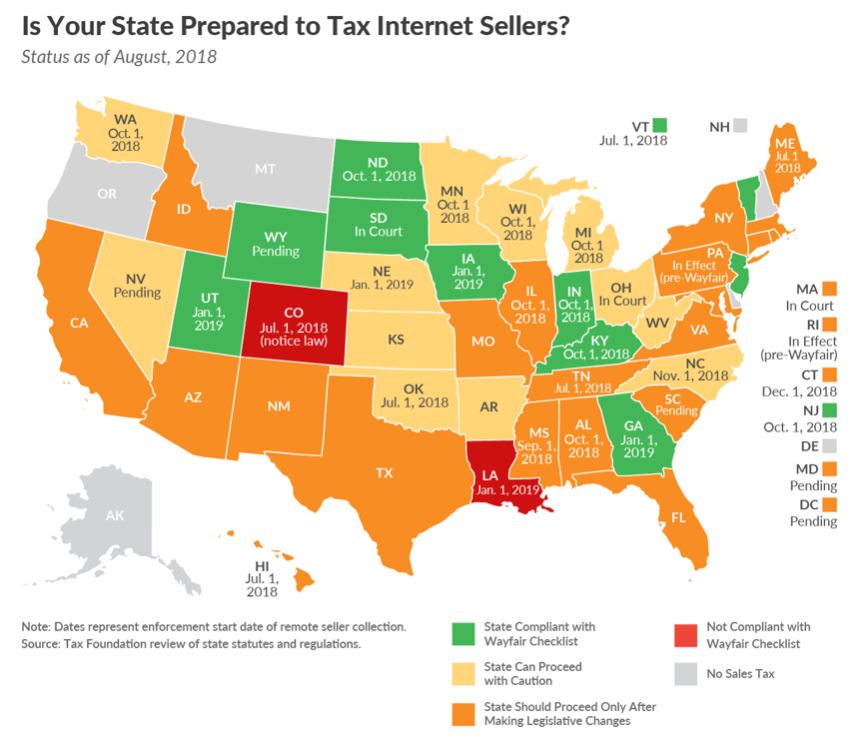 Conformity to recent federal income tax changes is not the only challenge (or opportunity, depending on your point of view) facing the 2019 Virginia General Assembly.  It may also be asked to amend Virginia’s sales and use tax rules, so the tax can be demanded from out-of-state sellers.

A recent review from the Tax Foundation provides concrete advice on the steps Virginia should take to bring its rules in line with recent direction from the U.S. Supreme Court, which reviewed and blessed South Dakota’s approach in the Wayfair decision.  It also points to several states ready to roll or almost in compliance, including North Carolina.  Each state is discussed in the report.

The Wayfair ruling reversed two previous decisions that states could not force businesses with no physical presence inside their border to collect and remit the tax.  The tax advantage for online sales has been fought by traditional retailers for decades.

The first and most difficult recommendation is Virginia should adopt the uniform sales tax definitions and rules of the interstate Streamlined Sales and Use Tax Agreement (SSUTA), a step South Dakota has already taken that played a key role in the majority’s opinion.

Joining SSUTA is something the Virginia legislature has refused to do as recently as 2016.  As part of that, Virginia would need to develop a simple on-line method for retailers in other states to report and remit the taxes they owe to Richmond.

A good description of the challenge is provided in the fiscal impact statement for the failed 2016 bill, which lists several provisions in Virginia that differ from the SSUTA and would have to change.  It also reports that the major hurdle in the past, Virginia local government insistence on applying tax at the point of sale instead of the point of delivery, has been addressed and perhaps removed by SSUTA.  Inside Virginia point of sale could remain the rule.

One option mentioned by the Tax Foundation not previously proposed in Virginia:  Allow remote sellers to register with SSUTA directly and recognize payments to Virginia through that mechanism as compliant with state law.

Secretary of Finance Aubrey Layne has estimated a possible $250 million windfall for the state, which would be split between the state and localities.   One state legislator is already pushing to earmark all the revenue to school construction.

After years of politicians promising to keep the internet “tax free,” moving to expand the tax on remote sales may be resisted by some people. But the internet hasn’t been tax free for some time, with large retailers including Amazon collecting tax and internet service itself subject to a sales tax now in this state – one of the few instances where Virginia taxes a pure service. 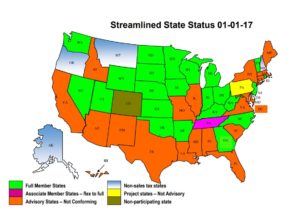 Virginia has not adopted SSUTA but has played an advisory role in its development.

Small retailers complain with good reason that it will be impossible to comply with the thousands of sales tax collectors and rule variations around the U.S.  But as the Tax Foundation points out, that is not much of a problem in Virginia.

The Tax Foundation, citing the court rule, also recommended a threshold level of activity before the tax is triggered. In South Dakota’s case that is $100,000 in sales or 200 annual transactions.  That leaves truly small retailers out of the tax collector’s net.

Many of these issues gore somebody’s ox, so a serious effort to adopt the SSUTA definitions should begin well before the Assembly convenes in January.  Without adoption of SSUTA Virginia will likely remain unable to force internet sellers outside its border to impose and remit this tax.  Frankly if it refuses to compromise some of its rules and improve its level of uniformity, sellers shouldn’t have to comply.