Social Theory vs. Science in K-12 Discipline in Virginia – Fraud or Just Wrong? 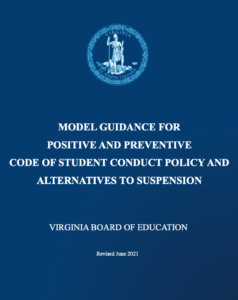 Both fraudulent and wrong?

American school children have in my lifetime been the subject of widespread experiments in theory disguised as breakthroughs in education.

Consider the “new math” and the “reading wars” as prominent examples.

Now we have social theory on school discipline created by federal civil rights lawyers piggybacking on what may or may not prove to be successful academic practices for children with disabilities. That social theory has been promulgated as state policy guidance in Virginia.

A Multi-tiered System of Supports (MTSS) has been used successfully in some instances to help teach academics to the learning-disabled.

This system was extended by lawyers from the aspirational left to school discipline and social-emotional learning without evidence. Now it has been published by the Virginia Board of Education for use by every school division in Virginia as a potential cure for “systemic racism” in discipline.

The methodology it recommends has been proven not to work. And it even has been shown in an extended government study in Oregon to disadvantage Black children.

The Board of Education should consider withdrawing the document. The 56 Virginia school divisions using MTSS for discipline may wish to reconsider.

Strong statements. So get a cup of coffee or an adult beverage and sit back while I set out to prove them.

MTSS/VTSS. For most of its life in schools, MTSS referred to tiered systems of supports that address academics.

RTI was a term used to describe a system of supports for academics for children with learning disabilities. Still is. RTI in 2018 was critiqued negatively as an unproven nationwide fad.

Let’s say that MTSS/RTI might be proven to work for academic support to children with learning disabilities. It is its application to disciplinary procedures that is in question here.

The Institute of Education Sciences (IES) was created in 2002 by the Education Sciences Reform Act (ESRA), itself a reaction by a Congress dismayed by experimentation on students nationwide by the widespread adoption of unproven educational theory.

The mission of the Institute is to provide national leadership in expanding fundamental knowledge and understanding of education from early childhood through post-secondary study, in order to provide parents, educators, students, researchers, policymakers, and the general public with reliable information about

(A) the condition and progress of education in the United States, including early childhood education;
(B) educational practices that support learning and improve academic achievement and access to educational opportunities for all students; and
(C) the effectiveness of Federal and other education programs.

IES is the statistics, research, and evaluation arm of the U.S. Department of Education. It is independent and non-partisan. Its budget exceeds $650 million annually.

The mission is to provide scientific evidence on which to ground education practice and policy and to share this information in formats that are useful and accessible to educators, parents, policymakers, researchers, and the public. One format for that work is the What Works Clearinghouse publications.

The IES Standards and Review Office oversees peer review of those reports.

IES, as far as I can tell by reading its products, applies the scientific method to all of its work.

It conducts careful observations, applies rigorous skepticism about what is observed, and requires statistical proof of reproducible positive outcomes before recommending anything.

Pretty much as Congress and the nation had hoped.

Make sure when reading the Introduction and Background to go to the “2021 revision of this document” for the major changes made to the 2017 edition. Those are the ones at issue here.

Note there that Virginia law § 22.1-279.1:1. The use of seclusion and restraint in public schools; Board of Education regulations, requires Board of Education regulations to be consistent with the Fifteen Principles contained in the U.S. Department of Education’s Restraint and Seclusion: Resource Document and Guidelines for the Development of Policies and Procedures for Managing Student Behavior in Emergency Situations. Those references can be honored whether VTSS is maintained or discarded.

Government reports cited. Of the DOE evidence that Virginia Model Guidance did cite, the Department itself had already rejected the two primary cited documents at the time they were referenced by the panel which drafted that document. It posted prominent warnings about that withdrawal.

The original federal backing behind MTSS as a disciplinary approach came from the Civil Rights Divisions of the Department of Education (DOE) and the Justice Department.

In January 2014, a “Dear Colleague” letter was issued by Arne Duncan, President Obama’s Secretary of Education, as a foreword to Guiding Principles A Resource Guide for Improving School Climate and Discipline (Guiding Principles). It quoted statistics on disproportional expulsion and suspension of minorities, but only speculated that MTSS would be an effective solution that also would create safer schools with better learning environments for all students.

three guiding principles that are grounded in our work (author’s note: this written by civil rights lawyers) with a wide variety of high-achieving and safe schools, emerging research, and consultation with experts in the field. (emphasis added)

In other words, the MTSS principles applied to school discipline were social theory devised by lawyers dressed up as educational theory.

This was downloaded Sunday, July 31 2022 about Guiding Principles:

UNDER REVIEW. This document and the underlying issues are under review by the U.S. Department of Education and the U.S. Department of Justice (as of August 30, 2021). The December 21, 2018 Dear Colleague Letter that rescinded this document is also under review. The Department of Education’s Office for Civil Rights published a Request for Information soliciting written comments from the public regarding the administration of school discipline in schools serving students in pre-K through grade 12. OCR and the Civil Rights Division of the Department of Justice are committed to ensuring that all students are able to learn and thrive in a safe and non-discriminatory environment. Please note that this notation does not have the effect of reinstating this guidance. (emphasis added).

The exact same warning is posted for Directory of Federal School Climate and Discipline Resources, another Virginia Model Guidance reference.

Virginia Tiered Systems of Supports (VTSS), grounded in the research of national models for Multi-Tiered System of Supports (MTSS), is a data-driven decision-making framework for establishing the academic, behavioral, and social-emotional supports needed for a school to be an effective learning environment for all students.

That document uses as references federal DOE documents that the authors either knew or should have known:

Government reports not cited. Virginia Model Guidance did not reference three documents from the DOE Institute of Education Sciences (IES) that not only chose not to recommend MTSS as a scientifically proven approach to discipline (Reducing Behavior Problems in the Elementary School Classroom, 2008), but also warned that there is no useable outcomes data on MTSS as a disciplinary approach and then later that there are no tools widely adopted by the states to even collect such data.

So they ignored those documents.

The authors of Virginia Model Guidance had reason to know that data on violence in schools reported in 2019 by IES in Crime, Violence, Discipline, and Safety in U.S. Public Schools Findings From the School Survey on Crime and Safety: 2017–18 showed that 60% of the violent incidents in schools in 2017-18 were in schools with more than 50% minority enrollment.

And that among those schools, half reported involving students in restorative circles, a core methodology of MTSS discipline.

The authors failed to reference it.

They did not cite Improving MTSS/RTI Implementation Through Measurement published by IES in March of 2020. Possibly because that report wrote:

Without measuring implementation, we don’t know if these investments are benefiting students.

How can educators and policymakers know if schools are implementing an MTSS/RTI framework as intended? Collecting data using an implementation assessment tool is one approach.

So, not only has the IES been unable to find scientific studies that prove MTSS effectiveness as a disciplinary approach, they had before Virginia Model Guidance was written warned separately that there was no useable data to evaluate MTSS and then that there were no tools widely adopted by the states to even collect such data.

There was even an IES study published in February of 2021 of Oregon MTSS implementation that showed MTSS did not help Black children escape exclusionary discipline, which was an Oregon law’s objective.

IES, at the request of the state of Oregon, reported in February of 2021 that MTSS for discipline in use there since 2016 not only did not help Black students, it actually worked in reverse.

Fraud Assessment. Virginia Model Guidance was published by VDOE in June of 2021.

It ignored reports by IES that questioned and indeed disproved the Virginia Model Guidance narrative. That can be explained by incompetence; but it proved convenient to the narrative.

But Model Guidance cited as evidence federal documents that had already been withdrawn when cited. Incompetence cannot explain the false references.

Newly completed work. The federal Institute of Education Sciences (IES) paid Harvard almost $24 million for a multi-year study Impact Evaluation of Training in Multi-Tiered Systems of Support for Behavior reported on in July of this year:

Students’ early problem behaviors in school can be disruptive and even hinder their learning and long-term success. To prevent these incidences, schools across the country report adopting multi-tiered systems of support for behavior (MTSS-B). (emphasis added)

Design
For this study of effectiveness, 89 elementary schools were randomly selected either to participate in the training program or to continue with their usual strategies for supporting student behavior.

What are the impacts on student behavior and achievement for all students? What are these impacts for struggling students?

The study itself reported a spotlight effect with the additional resources it brought with it.

The goal of this project is to build and optimize an adaptive intervention within a multi-tiered system of supports (MTSS) model to improve elementary school students’ academic and behavior outcomes.

Years 1 and 2 will focus on reading and behavior interventions, with follow-up data collection each subsequent year. Years 3 and 4 will focus on math and behavior interventions, with follow-up assessment each subsequent year. Year 5 will include the final follow-up data collection for the math cohort as well as dissemination activities.

Bottom line. What Virginia Model Guidance does not say is that MTSS is complex. It does not say that without correct implementation and evaluation, schools struggle to do it well and students can be negatively impacted in the process.

Action. I recommend Virginia Model Guidance be withdrawn by the Board of Education.

I will report the potential fraud to the Inspector General for investigation.

The 56 Virginia school divisions already using MTSS for discipline may wish to reconsider based on the scientific evidence of its failure.

The VDOE VTSS leadership team and the management of the VCU VTSS website maintained for VDOE may wish to consider the same evidence.

The Virginia Department of Education and Board of Education do not and never will have the resources of IES. I recommend a careful study of IES reports before publication of any state education policy.

Then prescribe as guidance what is proven to work.