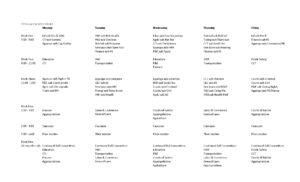 Click for larger view. The proposed House of Delegate’s daily schedule for the short short session.

From our “Be Careful What You Ask for Department,” I give you the General Assembly “short session” that opens Wednesday, which is supposed to last only 30 calendar days instead of the usual 46.  The Republican effort to limit the session’s possible output and impact is being answered by Democrats seeking to accelerate the process instead.

I was asked recently what my priority was for the coming session. The answer is to avoid a deep vein thrombosis from sitting all day, five or six days a week, straining to follow intense legislative discussions and legislative maneuvers with lousy sound and a screen that looks like Hollywood Squares crossed with musical chairs.

Doing a General Assembly at all under these conditions is legislative malpractice, a danger that should frighten all Virginians of any ideology. Nobody – not lobbyists, agency folks or average citizens – will have much luck getting input considered. Bills will be acted on far faster than even the digital tracking system can report. Expect fiscal and other impact reports to post well after bills have passed or even after the gavel falls “sine die” around Valentine’s Day.

Governor Ralph Northam was in the Richmond Times-Dispatch today complaining about the shorter short session and threatening to use his authority to call a special session later. In his case, it seems to be because he worries some of his aggressive, progressive agenda may not survive in a truncated session.

Virginia’s 73rd governor is pressed for time as lawmakers prepare to gather Wednesday for the last regular General Assembly session over which Northam will preside, one that GOP lawmakers want to restrict to 30 days. Northam called it an impossible timeline given the pandemic and Democrats’ “ambitious” progressive agenda.

“To say you can come in and do the work of the people in 30 days is just not realistic,” the governor said, vowing to extend the legislative gathering by 15 or 16 days through a special session, unless state Republicans drop their opposition to formally extending the session.”

Thwarting the progressive revolution was probably part of the motivation behind Republican legislators insisting that the off-year session stick to the shorter duration outlined in the state Constitution. Given the state’s embarrassment of financial riches (another story), cost is not really an issue.

Enough votes are needed to extend the constitutional maximum to 46 days that Republicans must join in the affirmative votes. A simple majority won’t do it. The Governor is still working to find those GOP votes, he implies. Yes, he can call a later special session but usually only for a limited purpose or purposes.

The downside of the GOP plan became evident last week as the House Democratic leadership circulated a new schedule for subcommittee and committee meetings, with four tranches of each in the morning and afternoon, followed by floor sessions starting at 4 p.m. Once those are done – and they can take several hours – more committee meetings will follow into the night.

Days that start at 7 a.m. and end at 10 p.m. are not unprecedented, but to do that every day, Monday through Friday, is unknown. Expect Saturday meetings, as well, something unknown since both bodies started marking blocs of non-controversial bills “uncontested.”

At its inception about 50 years ago, the short session was basically just for clean-up and tweaks to the budget and a few other issues. But work has grown to fill the time allotted and it is almost as busy as the full 60-day session held in even-numbered years. The pace was already dangerously rapid.

Much of the controversy this session will involve revisiting parts of that progressive agenda that failed in the regular or interminable special session held in 2020. Expect repeat arguments about paid leave, public employee unions, repeal of the Right to Work statute. But there will also be more issues, brand new issues.

As of this morning only 247 bills have been introduced and posted on the legislative information system. Even with the tight bill introduction limits on the 140 members, that will grow six-fold or more in days. The House Appropriations Committee had a deadline of yesterday for budget amendments, but Senate Finance amendments are not due until next Friday. First action on all of these matters will come in just a couple of weeks.

It takes time to read, circulate and consider bills, formulate arguments pro and con, and draft and socialize possible amendments. The combination of this accelerated schedule with the constraints of a remote session are deadly to good governance. It might indeed be time to reconsider on the time limit, but only if 1) the bill introduction limits remain tightly in place and 2) the majority leadership listens to and looks favorably on suggestions to improve communication.

Some other states are delaying their sessions at the height of the pandemic. Another possible improvement here would be to suspend this one after the bill introduction deadline. At least give the public a fighting chance to read and understand the bills before the voting starts.

This entry was posted in General Assembly and tagged Stephen D. Haner. Bookmark the permalink.