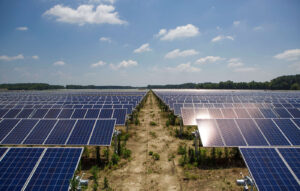 The well-shaded weeds and untilled earth under a Dominion solar facility. Dominion photo.

Perhaps issuing its ruling on the Ides of March by design, Virginia’s State Corporation Commission last week approved another major wave of requests from Dominion Energy Virginia for solar plants it will own, solar plants it will contract with, and a smattering of battery storage facilities added to provide some public relations cover.

In reviewing the massive case file that built up between July and February, without even diving into the long December hearing transcript, some key takeaways appear quickly.

If enforced, the stipulation could be the real headline here.  It calls for the next RPS development plan to model capacity, energy or renewable energy certificates (RECs) needed to comply with VCEA “without regard for the development targets set forth” in the VCEA section setting hard mandates.  That will be a very interesting model run.  While agreeing to that, Dominion killed bills in the General Assembly with the same effect.

Again, one big thumb was put on the scale:

However, resources currently pending before the Commission will be included in this model run consisting of the first tranche of offshore wind and the nuclear license extensions. All remaining renewable and storage resources will be selected by the model on a least cost optimization basis. For solar resources, the Company will use the three-year historical average capacity factors.

So, we are still stuck with the first mandated batch of offshore wind, now priced at $10 billion but everybody knows better.  It would never survive a true examination on the basis of necessity or prudence. It is a truly dumb use for the next 30 years of your money. And I doubt Dominion will give up on the second tranche of turbines that easily.

There is nothing in the stipulation that prohibits the ongoing secrecy over key financial issues, which should infuriate every Virginian with any utility bill from any company.

Somebody really should be paid to pay more attention to this stuff on behalf of real Virginians. The dominant media, the Richmond Times-Dispatch, Washington Post, and Virginia Mercury, are captive to and subsidized by the renewable energy industry, and in the case of the RTD, of course, Dominion is also a huge advertiser. Even the SCC failed to put out a news release.

It is criminal that an aging, cranky former reporter and lobbyist is going to now tell you about this, having finally lifted his head from the 2022 General Assembly. This case played out behind the 2022 election and its aftermath and then the legislature. This ongoing “renewable portfolio development plan” has become more important than the “integrated resource plan” of past focus.

You may have heard a couple of broadcast reports that the initial bill impact for a residential customer using that mythical 1,000-Kilowatt hours per month is $1.13, starting in May. That’s the beginning cost. The whole portfolio cost is approaching $1.5 billion, not including profits or interest over decades, so call that the teaser rate for later adjustment. It will come through a standalone Rider CE on bills.

Dozens of individual solar projects of all sizes scattered in perhaps 20 to 30 different localities are now approved, some to be owned by Dominion and some owned by others but selling power to Dominion. They total a nameplate capacity value of 661 megawatts for the utility-owned plants and 196 more megawatts through power purchase agreements.

Fewer than 40 megawatts of storage are planned, most of it also utility-owned. Attentive readers who have seen reports here in Bacon’s Rebellion of how unrealistically tiny that is as reliable backup for 857 megawatts of balky solar generation, please do not scare the cat with your laughter. They are doing it, of course, to back-load the bad news on ultimate consumer cost.  It will come.

Let’s add some context for comparison. Virginia has driven off and said good riddance to a privately financed merchant generation plant that would cover less than 200 acres in one spot, near other existing power infrastructure. It would have produced 1,650 megawatts of reliable power on demand with no investment required of and no risk to ratepayers. It would have been ready to use hydrogen rather than natural gas when available and cost effective.

Instead, thousands of acres of farm and forest land and viewsheds will be torn up for fields of solar panels and a few huge batteries, linked by miles of new transmission lines across perhaps 30 localities. The hodgepodge will produce under 900 megawatts of power (about half as much), an assumed 25% of the time and never on demand. Working or not, 100% of consumer cost of the $1.5 billion investment plus profit and interest will show in your future bills. The failure risk rests largely on ratepayers.

That’s the deal, Virginia. You have really been had.