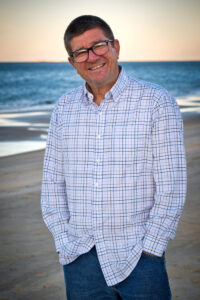 Remember when The Virginian-Pilot was a thing of beauty?

When the graphics that accompanied the hard-hitting news stories were so dazzling that they were what grabbed your attention?

Remember when newspapers around the country imitated what we were doing in Norfolk?

There was one man behind much of that style and sizzle: Sam Hundley.

For decades he was the newspaper’s unrivaled artistic king. The guy who wore out the carpet at newspaper awards ceremonies as he shyly marched up to the stage over and over again, collecting prizes while the rest of us just sat there.

In addition to the countless Virginia Press Association awards hoovered up by all of The Pilot’s talented designers, Sam won gold awards from the Society For News Design International. He illustrated the October 2011 cover of National Geographic Magazine and the 2019 album cover for the Meat Puppets’ “Dusty Notes.”

Sam kicked off his newspaper career at the Arizona Daily Star in Tucson, then went to The Herald in Everett, Washington and from there to The Denver Post, before landing at The Virginian-Pilot in 1984. The same year I arrived.

He started as a News Artist and was the Projects Designer when he left. But no title could adequately describe what Sam brought to the paper. Nothing lifted a writer’s spirit like learning that Hundley was assigned to a project you’d sweated over for weeks or months.

Sam was, in short, an artistic genius.

So naturally, in December of 2017 he was laid off and accepted a buyout from the paper. An optimist by nature, he seized the opportunity to concentrate on his passion: scrap art.

From his airy studio on a dune overlooking the Chesapeake Bay, Sam is surrounded by flotsam and jetsam. Literally. Much of the material used in his work washed up with the tide or was dropped off by friends on the lookout for interesting detritus.

Sam’s scrap work is garnering national recognition and he has several pieces currently on display at the Virginia Museum of Contemporary Art.

His latest project debuts today: A richly illustrated children’s book that is already creating a buzz on the highly competitive kid-lit scene.

“Gifts of the Magpie,” is the story of a sweet bird who brings gifts to her friends but always seems to misunderstand their requests. When a baseball-loving boy asks for a bat, he gets a flying mammal. When a squirrel wants a nut, it turns out to be a chunk of metal. In the end, however, all of the Magpie’s friends find excellent uses for their gifts.

In an author’s note, Sam explains scrap art to kids and the meaning of homonyms.

How do I know this is a terrific book? 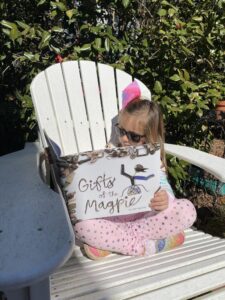 It passed the 5-year-old test at my house when an early copy arrived and instantly became Sawyer Grace’s favorite book. She loves to scrutinize the art and find interesting details in the characters. It’s been on her nightstand since it arrived, while other books rotate on and off.

“Gifts of the Magpie” received a coveted “star” from Kirkus Reviews, meaning it is a book of “exceptional merit.” It also scored a gushing review that cited Sam’s “clever wordplay” and called it, “A unique celebration of playful creativity.”

“Gifts of the Magpie” goes on sale today on Amazon, Barnes & Noble, Walmart and Target. If you have a child, a grandchild or you just enjoy beautiful art, you’re going to want a copy!

Where did the title originate?

“I remember my mother once called me a magpie when I was a kid because I was a collector even back then,” Sam told me. “I remembered that a few years ago and I thought that I could write a nice story for children about a magpie who finds things to help her friends.”

“The theme came about completely by chance as I dove into the story,” he added. “I was so terrified of making an error toward the end of my newspaper career that it was almost debilitating. And I wanted to address that fear and let kids know it’s never too late to make something right. I feel like this book is me doing that for myself in a way. Good things often come from mistakes and errors.

“Each person interprets the story in their own way. I believe it’s about self determination. Don’t rely on anyone else to answer your prayers. Only you can do that.”

Sam is more than just a brilliant artist with the ability to find beauty in cast-off items. He’s a good friend.

Buy his book. Give it to a child. Better yet, buy two.

Keep one for yourself.