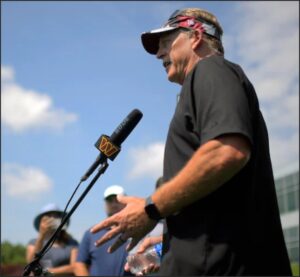 The decision to spike a deal to lure the Washington Commanders football team to Virginia has fallen apart. Commanders CEO Daniel Snyder had enlisted some bipartisan support for a proposal to create a Football Stadium Authority to finance construction of a stadium and a “mini city” around it in Loudoun County, but the legislation was floundering over the issue of how much of the tax revenue generated by the project would be rebated to the team.

Yesterday, reports The Washington Post, Senate Majority Leader Richard L. Saslaw, D-Fairfax, pulled the plug on the legislation because of a controversial social-media post made by Defensive Coordinator Jack Del Rio about the Jan. 6 riot at the U.S. Capitol.

There is no evidence that Del Rio was speaking for the Commanders organization. And he later apologized for part of his comment that caused the most problem — calling the riot a “dust up” compared to the George Floyd riots of 2020.

But Saslaw said the comment was the last straw after controversies over sexual harassment and financial mismanagement plaguing the Commanders organization. “This obviously was not very helpful, to put it mildly, but there’s so many other things out there,” he said. “A lot of people are saying, ‘Saslaw, this thing needs to wait.'”

I feel no angst over the deal getting scuttled, and I’m not defending Del Rio’s choice of words — the Jan. 6 riot was a lot worse than a “dust up.” But I am concerned about the precedent being set here. This is not a repeat of the skewering given Chick-Fil-A CEO Dan Cathy after he privately expressed opposition to gay marriage. It’s worse. The deal isn’t dead because of any opinions expressed by Commanders owner Dan Snyder. The Commanders are effectively being punished for views of an employee of the company expressed as his private opinions.

The new standard, it appears, is that all employees — or at least all employees in the public eye — must conform to the political views deemed acceptable by the political class or keep their mouths shut all the times, or their organizations are subject to being punished.

I watched last night as Congresswoman Liz Cheney, R-Wyoming, presented her indictment of President Trump for his words and actions before, during and after Jan. 6. If the case she presented stands up to scrutiny, his behavior was appalling and disqualifying. My only caveat is that everyone is entitled to present a defense, which Trump will not have an opportunity to do unless he is indicted and the case goes to trial. Whatever Trump’s level of culpability, it is beyond question that the riot, in which some participants attempted to disrupt the peaceful transfer of power, was bigger than a “dust up.” Del Rio’s words, as he has since conceded, were poorly chosen.

On the other hand, Del Rio was perfectly reasonable to want, as he put it, to “understand the whole story” about why the summer of riots, looting, burning and the destruction of personal property is never discussed. Leftists repeatedly and violently assaulted federal courthouses and other facilities in Portland, Oregon, effectively shutting them down for weeks. Who was responsible for that? Will anyone seek to punish those transgressions against the rule of law?

Whatever. Del Rio should have known that his comments would be controversial. He’s a big boy, and he should not be surprised if those comments generated blowback. But how much blowback is reasonable? What do his thoughts, expressed in a non-official capacity, have to do with the conduct of his job as defensive coordinator of a football team, much less to do with the merits of the tax-authority proposal? Nothing. Nothing whatsoever.

The lesson I take away from this incident is that everyone must pay obeisance to the Lords of the Political Class or they could subject not only themselves to retribution, but those around them.

The message: submit. We have the power, and you don’t. Not only will we punish you for your thought crimes, we will punish your employer.

Step by creeping step, the sanctions against those who say the “wrong” thing are getting tighter and tighter. And as government extends its writ into every sphere of human existence, it has limitless power to punish. This should terrify everyone, but it won’t. Those who are most outraged by others’ speech can never imagine the outrage being turned on them. But history has shown repeatedly that it can and will be.

This entry was posted in Individual liberties and tagged James A. Bacon. Bookmark the permalink.