Rider E Case Shows Many Flaws With This Process 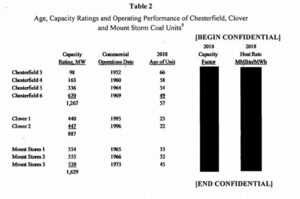 Key operating data on some Dominion Virginia coal plants, important to the Rider E case but hidden from us. Source: Office of Attorney General testimony.  Click for larger view.

Dominion Energy Virginia’s pending application for a new charge on electric bills for coal ash remediation is both a fairly routine request and an illustration of what is deeply wrong with Virginia’s electricity regulation.

When the major investor-owned utilities negotiated a return to regulation in 2007, the ability to create and collect these stand-alone add-on charges (“rate adjustment clauses”) was one of their demands.  It was the other major Virginia utility, Appalachian Power Company, that was most concerned about the ability to collect the cost of environmental compliance and it has had a rider on its bills for that purpose for some time.

Now 12 years later, Dominion is finally getting around to requesting Rider E, seeking to collect $302 million in capital costs for coal ash disposal at three major facilities, plus financing costs, plus a profit margin, possibly amortized over decades.  At least some of the coal-burning power plants involved are already closed, and the others are under deep financial strain with closure on the horizon.

The $302 million involved has been spent already to meet federal environmental rules, most of it at the Chesterfield coal plant.  But the 2019 General Assembly authorized massive additional spending on enhanced storage and recycling of coal ash, using clean-up standards that exceed existing federal rules, so the $302 million involved in this case is just the start.  The $2 or so it will add to the monthly residential bill for 1,000 kWh is also just the start.

The record on the case has been building over the spring, with some fairly sharp disagreements between the utility, consumer advocates and environmental advocates.  The Office of the Attorney General’s outside expert, Scott Norwood, is challenging some of the money spent as imprudent and unnecessary (here), and the State Corporation Commission’s staff has complained Dominion’s actions haven’t conformed with plans it filed with the SCC.  Here is a Richmond Times-Dispatch summary from a few weeks back.

Even environmental witnesses are arguing some of the spending was unneeded.  Devi Glick of Synapse Energy Economics, on behalf of Sierra Club, makes the same points as Norwood that much of Dominion’s spending at Chesterfield was not necessary and should not be charged to ratepayers.

In rebuttal testimony filed recently (here), Dominion Vice President for Generation Construction Mark Mitchell responds that the wastewater treatment facility and new landfill which are also part of the 2016 Rider E improvements will continue to be needed, despite the parts of the Chesterfield plant already closed.

“Respondents seem to suggest that the prudence of the Projects that were initiated in 2015 should be analyzed based on current, 2019 information. No one can predict the future with 100% accuracy and that is not the appropriate standard to review these projects,” Mitchell wrote.

The disagreements in the filed testimony will probably lead to interesting exchanges when the SCC holds a hearing June 11.  The law favors creation of riders, so Rider E is likely coming to your bill in some form, destined to grow in coming years.  What makes this case interesting?  What are the problems with our existing process highlighted by this case (and frankly many of the cases reviewed in the past year on Bacon’s Rebellion?)

Widespread Secrecy.  Far too much of the information in these filings (and most other cases) is declared by the utility to be confidential and hidden from view, with the SCC’s blessing.  Only participants can see it after promising not to reveal it.  Most of the data behind the argument that these coal plants were obviously uneconomical and slated for closing is redacted.  A chart pulled from Norwood’s testimony used above shows the problem.  Why should such data be secret?  It is wrong that we who pay can’t know what we’re paying for.

Breakdown of Trust.   Here’s what the SCC’s Gregory Abbott, deputy director of the utility regulation division, included in his written testimony:

“There appears to be a troubling pattern of the Company telling the Commission one thing in its Integrated Resource Plan (“IRP”) filings while almost simultaneously taking actions contrary to its IRP representations in its real-world decision making.  In the case of the 2015 IRP, this is particularly concerning.  In 2015, the Company had actually executed two multi-million dollar contracts for the continued operation of  Chesterfield Units 3 and 4 in the two months immediately preceding the 2015 IRP filing  and failed to disclose this information to the Commission while concurrently representing to the Commission that Chesterfield Units 3 and 4 were likely going to be retired in 2020.”

This builds on earlier comments in the current integrated resource planning case, where Commissioner Mark Christie complained from the bench that what Dominion had filed didn’t match what it was telling Wall Street analysts in an investor presentation.  Neither the SCC nor an investor forum are locations where dissembling are allowed.  Who wasn’t being given the right story?

All of us need to be concerned when the level of trust has gotten this bad, especially when so much crucial data is hidden from public view.

The Interplay of Riders and Base Rates.  As noted, this is Dominion’s first rider for specific environmental compliance, despite the millions it has spent on those requirements year after year.  To date the money was apparently baked into base rates, part of maintenance capital or operating expenses of the various plants in the rate base.  Given what is known about the company’s finances, those base rates have so far covered those costs and left plenty of profit, profit suspected of being far in excess of the allowed return on equity.

But this is an area where the law allows the utility, on its own motion, to propose a new RAC and pull those operating costs out of base rates.  That would be fine if the SCC had full authority to adjust the base rates down in compensation, but the General Assembly has foolishly interfered with that process.  The state law specifically prohibits the SCC from looking at other aspects of the company’s finances when considering these new RACs, which is deeply unfair to consumers.

Perverse Incentives.  One of the allegations in testimony from Sierra Club witness Jeremy Fisher is that Dominion pushed ahead with the improvements, knowing the coal plants might not be open long, because of its ability to collect a profit margin year after year on any capital investment.  This is from his testimony, yet again with the key portion redacted.

“Q.  What is your evidence that the Company saw the CHIA Projects as an investment opportunity?

A.  The Company provided detailed presentations provided to various management committees prior to and during the construction of the CHIA Projects. In one particular presentation to the [BEGIN CONFIDENTIAL] [END CONFIDENTIAL]”

Fisher spends much of his testimony (here) arguing the coal plants are not viable long term, but again is unable to reveal much of his data. Would Dominion have made the investments if the plants were owned, not by an integrated company with captive ratepayers, but by an independent generation entity that had to meet a competitive price in the market?  Would it have done these things with no guarantee of a return on equity for its stockholders?  We’ll never know.

(Note:   An earlier version of this story attributed that final allegation about profit motive to the Attorney General’s witness Scott Norwood, an error on my part.  SDH)