The Richmond Times- Dispatch motto is “Where Your Story Lives.”

They fail to define “your.”

I posted a comment this morning on a story in the RTD titled “Hanover County School Board introduces transgender policy; discussion is limited.”

The headline is unconsciously ironic, but I did not comment on that. Picking on headline writers is weak.

I noted that the author, in an extensive article, failed to mention as context for the public discussion upon which she reported the fact that parents and the Board had in mind the two rapes in Loudoun County Public Schools last summer/fall by a young man wearing a skirt to get into the girls bathroom.

I did not comment on the wisdom of the draft resolution that was considered by the Board of Education. I thought it ridiculous. Something simpler, perhaps, like “unless you have to sit or squat to pee, stay out of the girls room.” Or whatever.  But I left that alone.

Mine was, I thought, a respectable input. I just received a note rejecting my comment.

This is the entire note: 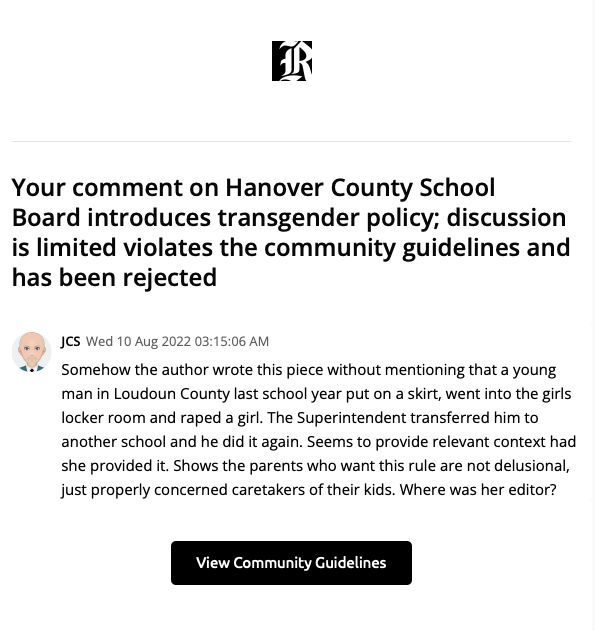 I think my comment was concise and accurate for the purpose.

I didn’t note that “the first girl was already having sex with him” because she said no. Everything that happened after that was rape. So I wrote rape. He pled guilty. “The Superintendent transferred him to another school and he did it again.” Also not in dispute.

I simply pointed out that the author of the piece did not mention that fact that was foremost on the minds of the parents and the Board of Education. Also not in dispute.

But read the article. It’s not there.

So I followed that Community Guidelines link.

No, you didn’t make a mistake, it took me back to the article as well. So I searched. A search of “Community Guidelines” on the RTD website brings up 1,926 articles containing those terms.

So I went to “Letters to the Editor.” Here are those guidelines.

I offered perspective on content published in the RTD. Check.

Does the word “rape” violate community standards? Apparently not. I searched it on the RTD website and 4,400 articles came up.

An attack on political figures or parties  Can’t find that in what I wrote. My tone maybe? If you think that, look at the comments that were accepted.

The fact that I mentioned the author’s editor? Perhaps there are none left and this was considered cruel or embarrassing or both. Not included in the guidelines, however.

They should be grateful I did not comment on Michael Paul Williams’ column on the same subject. William’s column starts with”

Virginia, a primary battleground during the Civil War …

You know where it went from there.

But I got no points for what I did not write.

Just a rejection note. No flowers.

This entry was posted in Media and tagged James Sherlock. Bookmark the permalink.