“Richmond Real” and the City’s Limited Pool Hours for Kids

On June 9, the Richmond Times Dispatch (RTD) offered a story on Mayor Stoney’s new slogan for the City of Richmond: “Richmond Real.”

The RTD piece offered a positive account of the new marketing slogan devised under what Richmond Free Press (RFP) has called a “secretive” project led by the West Cary Group, a Richmond advertising and marketing company run by CEO Moses Foster.

It is indeed secretive to the extent that the city’s open data portal of existing contracts shows “no results found” for a contract the supplier of which is “West Cary Group,” so it is impossible to find more details there.

The RTD offered comments of city officials that the campaign had been developed with “inclusivity.”

With Richmond Real, we are listening, activating and we are continuing our commitment to serving every member of our community.

The RFP, the city’s excellent Black newspaper, had a different opinion, and summarized it as an “expensive dud.”

Some Richmond activists were less charitable.

From that RFP editorial,

Obviously, the mayor is enthusiastic about the new slogan “Richmond Real: Real people. Real places. Real stories.” As he put it, this slogan captures “all that is authentic and unique about the great city of Richmond.”

Ask yourself: Does it really capture the city’s vision and mission? Does it really send an understandable message? Is it honest, positive and passionate?

On social media, much of the commentary focuses on ways the money could have been better spent solving Real Problems people are facing….

For example, the Rev. Ralph Hodge of Second Baptist Church of South Side issued this message on Twitter after hearing of the campaign: “Richmond Virginia won’t be ‘REAL’ until it has REAL affordable housing, REAL equity in education, and REAL leadership.”

Activist Phil Wilayto offered this view of the campaign on Facebook: “Richmond Real” – Real Poor. Real Violent. Real Racist. And a Real Waste of $450,000? In the background of this Band-Aid-on-a-gaping-wound media event, you can hear the sounds of the bulldozers destroying public housing in Creighton Court, adding Real Cruel to the mix.

Not exactly the sentiments the mayor hoped for in introducing this tagline.

Asked for an opinion on Richmond Real, one council member just burst out laughing. When the laughter was over, the council member indicated that represented the view of constituents who had commented.

Ahem, mayor, Richmond may be real, but this initiative appears to be an expensive dud.

The good news: neither Mr. Foster nor his company are listed in VPAP as donors to Mayor Stoney’s political campaigns.

City Pool Hours. This story parallels one I am developing on the disappointing availability of Richmond’s seven public pools this summer. 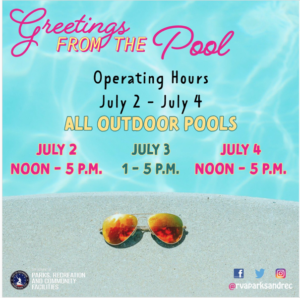 Those pools were open only four or five hours each day over the 4th of July weekend.  I inquired of the Parks and Recreation Department why they were not open longer.

Was the limit general staff? Lifeguards? Funding? Something else? Thank you.

I received an interesting response. The reply informed me those were normal weekend hours with a holiday hours day added.

Those are actually our normal weekend operating hours, with holiday hours being in effect on Monday, July 4. Normal week day hours are 1 p.m. until 8 p.m. Monday – Friday.”

The actual hours of operation for the outdoor pools are:

I find the very limited hours for unaccompanied Richmond kids to use the city’s public pools to be utterly irrational and frankly mystifying in a city that should be concerned about crime, gangs and providing safe, wholesome and healthy options for its children in the summers.

I have re-asked Parks and Recreation the questions about the reasons for the limited pool hours for kids. No response yet.

I hope the reason is not lack of funds. And that the “Richmond Real” money would not have fixed it.

The Richmond budget funding for Park, Field, Recreation Center and Sites in the Citywide Service Categories when combining General Fund and Special Fund expenditure authorizations went from $10,646,270 in the FY 22 to $12,195,153 starting July 1 of this year.

Bottom line:  The Richmond Free Press is a reliable barometer for the opinions of the Black community in that city. The “Richmond Real” campaign needs further explanation.

Where did the funding come from? How was the contract bid and awarded? Why can’t citizens see it in the city “open data” portal? Why did the Stoney administration claim the campaign was developed with “inclusivity” just to have prominent citizens and a city council member mock the process and the Richmond Free Press slam the program as an “ineffective dud”?

As for the very limited availability of the city pools to its children, I honestly wonder why the mayor and City Council let this situation happen.

It is not possible that they are unaware of the real need. I hope to see new, expanded hours posted ASAP.

This entry was posted in Economic development, Infrastructure and tagged James Sherlock. Bookmark the permalink.