Revive the Riverfront Plan from Its Coma 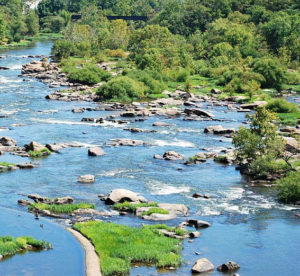 The James River in downtown Richmond

The James River is often (rightfully) cited as the region’s crown jewel. It is the one thing just about everyone can agree on, rally behind, enjoy in their free time, and show off to out-of-town friends. If you recall the Richmond Riverfront Plan that was developed by the City at considerable expense in 2012, the first page notes:

The Plan identifies opportunities for new and expanded connections and open spaces, incorporating a broad range of landscape experiences and programmatic opportunities; it also highlights preferred private development sites that will both gain from and contribute to the long-term stewardship of the Riverfront. The Riverfront Plan establishes the James River as a shared amenity for Richmond’s broader community, a dynamic year-round attraction for the surrounding counties and region, as well as an international destination. Strengthening and re-forging physical connections and continuities with the river will significantly enhance adjacent neighborhoods, reverberating benefits well beyond the project boundary.

Some of the goals/projects of the plan were small and attainable, others large and complex, which would take planning and patience to achieve. But goals they were, and they are still worth pursuing. Ahhh, those big and grand plans that would do so much to make our river and riverfront more awesome by the year.

So, what happened to the Riverfront Plan?
Some progress was made on smaller goals and one big one. After Mayor  Dwight Jones opened the incredibly awesome Potterfield Bridge just before he left office in late-2016, it seems the plan was put in an induced coma. It hasn’t been discussed much or funded in the budget with any real commitment or any specific project advancement. In fact, on the City’s web site, the Riverfront Plan “news page” lists its last entry in September 2017. Will it ever emerge from its coma?

Perhaps someone will consider putting the Capital Region Land Conservancy (CRLC) in charge of the plan’s medical treatment since no one in the Mayor’s Office or City Council seems interested in making things happen. The CRLC has been kicking ass and taking names in recent months and would be a great non-profit to handle some functions that the City won’t/can’t do themselves (there are so many non-profits who assist the City in providing or complimenting needed services, why not the river?). There is no embarrassment in asking for help for work that will benefit City residents and regional visitors.

Led by my friend and former colleague on City Council, Parker Agelasto, the CRLC has rung up an impressive list of achievements in the last 12 months. There were two just recently: 28 acres in Varina next to an historic battlefield and 42 acres in Petersburg along the Appomattox River that will allow the completion of the Appomattox River Trail and also be a part of the Fall Line Trail.

In Varina, Howard Eberly III donated 28 acres of land presently and in time will convey 45 more acres to the CRLC. His family established the Four Mile Creek Farm more than 130 years ago, and has tuned down multiple offers and big bucks from developers in recent years. The property sits within the New Market Heights Battlefield which was “the scene of the fighting on Sept. 29, 1864, when U.S. Colored Troops broke though Confederate defenses for their greatest victory of the Civil War and one that led directly to the fall of Petersburg and subsequently Richmond. For their valor, 14 USCT members were awarded the Medal of Honor.”

It is property considered a top priority by the The Virginia Department of Conservation and Recreation and “adds to the qualities of the Route 5 State Scenic Byway and Virginia Capital Trail” and is listed as a prized birding area by the Audubon Society.

Greg McQuade just last night on CBS6 ran an outstanding interview and story about Mr. Eberly and describes him as “a humble landowner who turned down a lot of green to keep his property green forever.”

Down along the Appomattox River in Petersburg, the CRLC acquired 42 acres of land that is a huge win on two fronts. The piece of land straddles parts of Chesterfield County, Colonial Heights and Petersburg and includes 16 islands and ruins of former mills, canals and dams that will allow for the completion of the 25-mile Appomattox River Trail (ART). As a bonus, the site will intersect with the ART and be mile marker zero on the 42-mile Fall Line Trail that will extend to Ashland.

The Chesterfield Observer has the best background information about the intricacies of the land and the potential for this acquisition to do incredible things for the Appomattox River Trail. For example, it is now under unified, public ownership for the first time in 160 years; a study found more than 520 different species in a two-mile radius; and, the conveyance also includes rights to half of the river flow, which used to belong to the property owner for a hydroelectric power plant. They even have a picture of the old bridge arch supports that will one day suspend a bridge over the Appomattox to begin or end a journey on the Fall Line Trail.

“The purchase opens up a world of possibilities for the public, adding river frontage at the Appomattox, by linking the existing riverfront trail that runs along the Virginia State University property and acting as a key trail connector west.” Back up to one year ago and recall the announcement that the CRLC joined with a Northern Virginia non-profit and purchased the long-debated Echo Harbor Property (click here for archived stories about that drama) along the James River next to Great Shiplock Park and the Capital Trail. Echo Harbor had several iterations of proposed development, but others preferred greenspace accessible to everyone. While that debate had different levels of comportment and civility during the Downtown Master Plan and Riverfront Plan processes, the CRLC came along and quietly and effectively negotiated and made the purchase and placed it under a conservation easement which will eventually be transferred to the City to become part of the James River Park System.

The James River Association, one of the partners in the purchase, will build a small educational center to connect youth with the river and the environment. It will have classrooms and likely a small aquarium and develop programming and activities for Richmond Public Schools and local youth development and education organizations to learn about science, physical activity, art and history. If that isn’t a win all the way around, I am not sure what is.

Check another box for the CRLC in preserving land and riverfront as green space in a world that is too quickly paving over it. At the time, back in the day, you wondered why the debate over Echo Harbor got so heated and contentious, and now I guess we know why — because the James River is our greatest asset and we must protect it and use it wisely. But we also must get the Riverfront Plan back up and running. Our batting average for improving and protecting the river is better than average since the 1970’s Kepone disaster, but there is more to be done. We should look to groups like the Capital Region Land Conservancy to wake us up and lead the way, because our “leaders” seem to prefer the coma.

This entry was posted in Land use & development and tagged Jon Baliles. Bookmark the permalink.