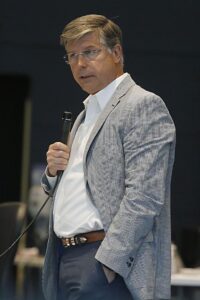 Sen. Steve Newman (R-Lynchburg) has resigned from the Virginia Redistricting Commission. He was one of two Republican Senators appointed to the Commission.

Newman did not give any reasons for his decision. However, it is difficult to think it was not out of personal pique at the turn the decision process has taken. As I detailed in my last post, the bipartisan co-chairs announced in their August 23 meeting a policy forbidding individual commissioners from communicating with the Commission’s partisan attorneys and map drawers outside of a public meeting or without all the members being aware of the communication and any questions and of the response. This policy largely negates the decisions previously made by the Commission and vigorously pushed by Newman: two sets of partisan attorneys, two sets of map drawers, consideration of political data, and consideration of incumbents’ addresses. Newman was the most outspoken member opposed to the new protocol. The recent revealing by the map drawers of proposed Senate districts for Northern Virginia must have been the last straw. They were developed without taking incumbents’ addresses into consideration. Any attempted tinkering with those boundaries will have to occur in public session, presumably subject to a series of votes.

I have always viewed Newman as one of the most reasonable and articulate conservatives in the Senate and this move is thus surprising and disappointing. It is even more puzzling because the senator supposedly did not “have a dog in the fight.” He announced at the August 23 meeting that he probably would not be running for reelection.

The other Republican Senator on the panel is Ryan McDougle of Hanover. Senate Minority Leader Tommy Norment will select a replacement for Newman. The Commission has a little more than a month to complete redistricting plans for the House and Senate and submit them to the General Assembly.