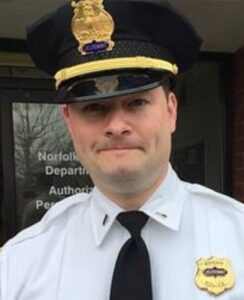 Justice prevailed in Kenosha, Wisconsin on Friday when a courageous jury found Kyle Rittenhouse not guilty of murder in the shooting deaths of two rioters — both felons — who were threatening or attacking him and in the wounding of another criminal who was pointing a gun at his head.

Despite months of biased news reporting by the mainstream media, the 12 jurors learned the real story of what went down on August 23, 2020 as chaos reigned in Kenosha, businesses were set on fire and looted, and hooligans ran wild in the streets.

Anyone watching the trial knew this was a clear case of self-defense. Still, it took courage for the jury to find in Rittenhouse’s favor as demonstrators with megaphones outside the courthouse disrupted the quiet as they deliberated.

A clear attempt to intimidate the jurors. But they stood fast.

Now that the Rittenhouse case is over, it’s time for the Norfolk Police Department to admit it acted unfairly and in haste in firing Lt. William K. Kelly III last April after he was outed by left-wing hackers for a $25 donation he sent to Rittenhouse’s defense.

Kelly is owed an apology, back pay and his old job.

We wrote about Kelly’s case the day after he was sacked. If it was unfair to fire him in April — and it was — it’s doubly unfair now that it’s been established that Rittenhouse did nothing wrong.

No doubt city officials will argue that Kelly’s offense was sending a small donation through his work email. Sorry, that is NOT a fireable offense. It was the recipient of the donation that ticked off the highly partisan Police Chief Larry Boone and led to the loss of the job Kelly had held for 19 years.

Let’s be honest, 25 bucks sent to a save-the-puppies charity wouldn’t have ended a distinguished career in the Norfolk PD. It was the wrongheaded belief that Kelly was sending money to a guy who was a vigilante.

The irony in all of this is the naked partisanship of Chief Boone. In May of 2020 he was photographed marching in a protest — in uniform — carrying a Black Lives Matter banner.

How could that be acceptable and 25 dollars to a defense fund isn’t?

Norfolk Police simply can’t have it both ways. It’s either a completely non-partisan organization or members are free to express themselves.

Either way, sending a small contribution to the defense fund of an innocent man should never have been a cause for termination.

Kelly hasn’t been paid since April. He has three children and a wife with cancer to support. When he joined us in the radio studio last Monday, Kelly told Mike Imprevento and me that he’d had trouble finding work because of all the publicity surrounding his case.

Kelly’s now working manual labor. This is a waste of Kelly’s training and talent.

This entry was posted in Crime , corrections and law enforcement, Individual liberties and tagged Kerry Dougherty. Bookmark the permalink.