Race As a Political Construct 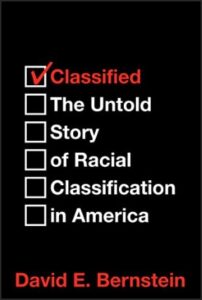 Race is a social construct, as the Wokesters endlessly remind us. It’s one of the few observations from the left that I mostly agree with… or, at least, I did agree with until reading, Classified: The Untold Story of Racial Classification in America, by George Mason University law school professor David E. Bernstein.

Now I’m more inclined to say that in the United States race is a political construct.

According to the U.S. Census, here’s the breakdown of Virginia’s 2020 population by race:

Unelected federal bureaucrats and unelected judges make the decisions based upon a combination of evolving ideology, case law, and political pressure from racial/ethnic advocacy groups. The resulting classification system influences the allocation of billions of government dollars, and in so doing reinforces racial/ethnic constructs of how Americans think of themselves.
“The categories often draw arbitrary and inconsistent distinctions among groups and sometimes verge on incoherence,” Bernstein writes.

Whites. If you thought that “White” refers exclusively to Americans of European ancestry, you’d be wrong. North Africans and Middle Easterners also are classified as White. Many are comfortable with that designation, but not all are. Some have lobbied (so far unsuccessfully) for either Arabs or Middle Easterners to be classified as their own race. The difficulty becomes where to draw the line. Would Persians and Afghans be included? Why stop there? Why not include Pakistanis and Indians? At one time, inhabitants of the sub-continent of Indian, a demographic rarity in the U.S. at the time, were classified as White.

Asians. The idea of “Asian” as a race is meaningless from a genetic or anthropological perspective. The classification lumps together groups that diverge widely by physical appearance, language, and culture. From a genetic perspective, the inhabitants of the Indian subcontinent more closely resemble Europeans than they resemble East Asians. Genetically, Filipinos more closely resemble Pacific Islanders than East Asians.

Blacks. The category of Blacks encompasses not only “American Descendants of Slaves” (ADOS), but also Black immigrants from African and Caribbean countries. One reason this lumping together individuals into a single “race” is a problem is that the continent of Africa has the greatest genetic diversity of any on the planet. Another is that African Americans have a significant genetic inheritance from White ancestors. Even when viewed from a sociological perspective, the experiences of ADOS, African immigrants and Caribbean immigrants in the United States have been very different.

Hispanics. This may be the most artificial classification of all. As Bernstein recounts the history, the category originated from the agitation of Chicanos (Mexican Americans), Puerto Ricans and Cubans. The continued justification for the classification is that Hispanics have encountered severe and widespread discrimination. Perhaps some Hispanic sub-groups did, but the classification, based primarily upon native language and Spanish surnames, has no logical boundaries. For one, it includes Spaniards from Spain, who are White and have experienced no more discrimination in the U.S. than other White ethnics. It includes Latino Whites who boast of their Castilian ancestry and trace their roots to Europe. It includes Latinos of mixed Spanish-Indian ancestry who in their native countries identify as “mestizo,” a category that does not exist in the U.S., as well as individuals of primarily Indian ancestry. For some reason that even Bernstein does not explain, Mexicans and Central Americans of Indian heritage are not classified American-Indian when they come to the United States. Heaping absurdity upon absurdity, the Hispanic category has expanded in some instances to include Portuguese-speaking Brazilians, and by extension Americans of Portuguese ancestry.

Two or more races. In defiance of the narrative that America is a systemically racist country, Americans of different races intermarry frequently and produce prodigious numbers of dual-race offspring. (Tiger Woods can count three racial ancestries: African-American, White, and Asian.) America is a genetic mixing bowl with no parallel anywhere in the world. While the designation “two or more races” as a Census category was fought by groups who worried that it would reduce their perceived numbers and political clout, the unwillingness of millions of Americans to identify with only one race became too prevalent to ignore.

Why does this all matter? Why don’t we treat all people as individuals without reference to their genetic ancestry? Don’t we aspire to create a society in which outward physical traits are superficial and meaningless measures of a person’s worth?

Well, some may wish for such an outcome, but some don’t. The construction and maintenance of racial categories today has become (1) a source of government-supplied privilege, and (2) a source of political power. Some people gain profit and power from the racial/ethnic balkanization of the country.

Federal, state, and local governments (Virginia is no exception here) hand out billions of dollars in contracts and small business loans to disadvantaged minorities. These programs were designed originally to help African Americans launch and grow small businesses. But the rewards are so lucrative that other racial/ethnic groups have lobbied successfully to get a piece of the action. There is so much to be gained from affirmative-action programs that courts have been forced to adjudicate cases involving “identity entrepreneurs” — Whites claiming “minority” status on the basis of a Black or Indian ancestor. These cases have been decided on the basis of the claimant’s physical appearance, previous self-identification, tribal membership, and blood line. Some cases are reminiscent of the old quadroon/octoroon controversies of the Jim Crow era, but with individuals claiming to be Black or Indian instead of passing for White.

As Bernstein observes, racial/ethnic identity is also increasingly a criteria for admission into elite colleges and universities. Although discriminating for or against individuals on the basis of their race has been ruled unconstitutional, universities have devised all manner of proxies for race and ethnicity that enable them to engineer the racial profiles they want, mainly more “black” and “brown” people.

Ironically, the racial preferences have done relatively little to benefit the one group, American Descendants of Slaves, who, along with American Indians, have suffered the most grievous discrimination in the past. The goodies handed out in government set-aside preferences go disproportionately to Asians, White Hispanics, Whites claiming American-Indian ancestry, and immigrants who have suffered no meaningful discrimination at all. Even in the higher-ed world, the Black enrollment preference disproportionately benefits African and Caribbean immigrants.

Bernstein argues that it may be justifiable to hand out preferences to American Descendants of Slaves and to Indians living on reservations, the two groups that have suffered the worst historical injustices. Otherwise, he condemns the system of racial classification as an incoherent mess developed by the government via “amateur anthropology and sociology, interest group lobbying, incompetence, inertia, lack of public oversight, and happenstance.”

This entry was posted in Book review, Race and race relations and tagged James A. Bacon. Bookmark the permalink.