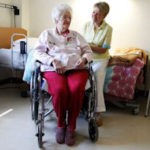 Several days ago, Carol J. Bova published data showing that 50 of the 101 Virginia nursing-home facilities rated as below average in the latest Medicare ratings belong to privately owned firms “When is the Department of Health going to enforce basic standards,” she asked in conclusion. “And when are our legislators going to appropriate enough for inspectors to do the job?”

In the comments, I cautioned about jumping to conclusions about equating for-profit nursing home chains with lower quality. In particular, I wondered if for-profit firms were more likely to acquire nursing homes funded by Medicaid, which chronically underpays its vendors.

Now comes a new study that suggests that Private Equity (PE) ownership of nursing homes is adverse to patient health. “Our estimates show that PE ownership increases the short-term mortality of Medicare patients by 10%, implying 20,150 lives lost due to PE ownership over our twelve-year sample period,” write Atul Gupta and the co-authors of “Does Private Equity Investment in Healthcare benefit Patients? Evidence from Nursing Homes.”

The lost lives are accompanied by declines in other measures of patient well-being, such as lower mobility, while taxpayer spending per patient episode increases by 11%, the authors write. Operational changes at the nursing homes that help explain these effects include declines in nursing staff and reduced compliance with standards.

Maybe Carol was on to something: Maybe Virginia nursing homes do need more inspections. And maybe fellow Bacon Rebel James C. Sherlock is right when he argues that the political clout of the nursing home industry is what blocks the state from carrying out those inspections.

The national study, published by the National Bureau of Economic Research, certainly gives credence to the idea that the private-equity model of nursing home ownership is not compatible with patient well being. The strength of Gupta’s findings suggests that the ownership issue does warrant closer examination in Virginia. 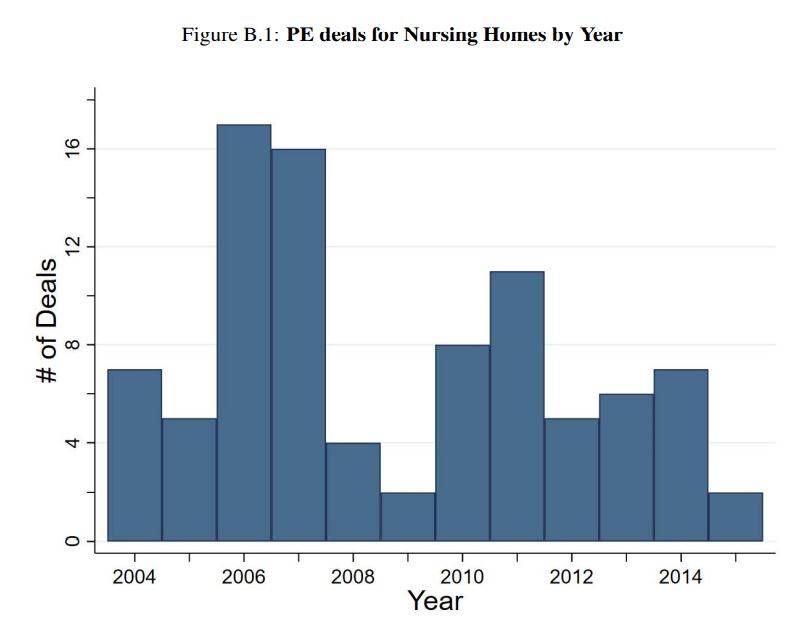 However, what may be true nationally is not necessarily true locally. Conceivably, Virginia is an exception to the national trend. “Private Equity” ownership does not necessarily equate with “private” ownership. Private equity deals are financed with extensive debt, and they reward general partners for short-term profits. Therefore, it would be necessary to distinguish between different types of private ownership among Virginia nursing home companies before drawing strong conclusions.

PE investment has increased significantly in the U.S. healthcare system, from less than $5 billion in 2000 to more than $100 billion in 2018. PE-owned firms provide the staff for more than one-third of emergency rooms, own larger hospital and nursing-home chains, and are expanding ownership of physician practices, says the study.

This map, taken from the study, does not provide the kind of granular detail required for careful analysis, but it does suggest that there has been less PE activity in Virginia than in neighboring states. 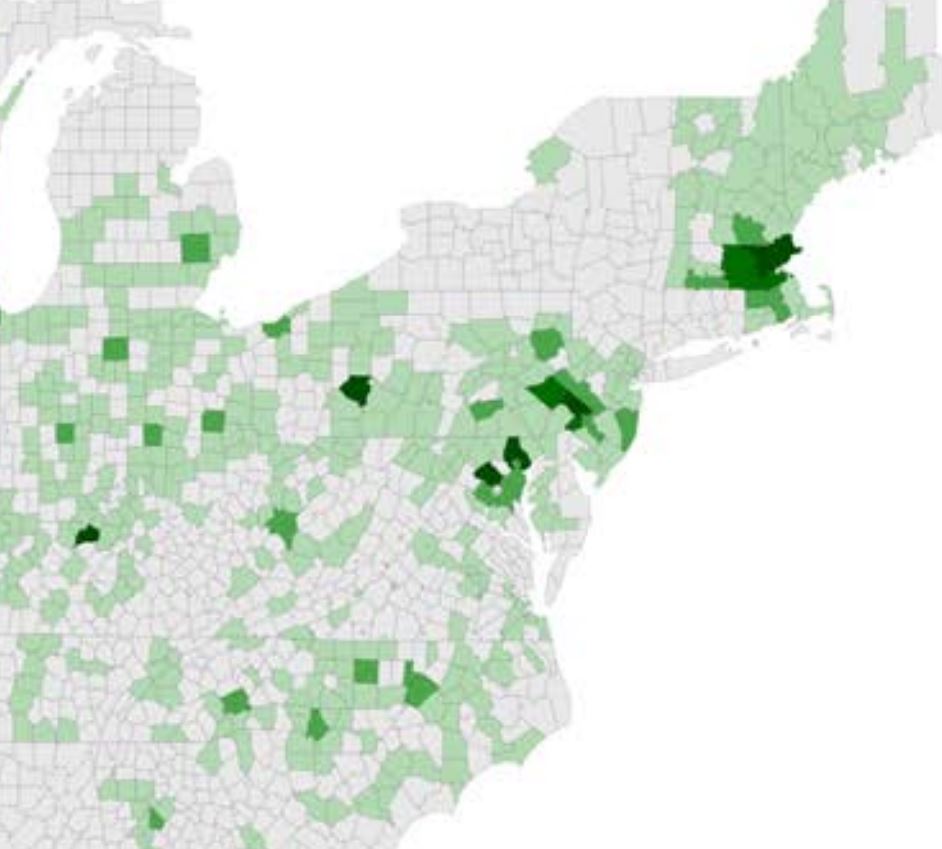 Still, the authors’ analysis is consistent with the red flags raised by Bova and Sherlock in numerous Bacon’s Rebellion posts highlighting cutbacks to nursing staff and state underfunding of inspections. States the study:

We find negative effects on facility Five Star ratings, which are constructed by CMS to provide summary information on quality of care. We next consider nurse availability, which is the most important determinant of quality of care …. We find that PE ownership leads to a 3% decline in hours per patient-day supplied by the frontline nursing assistants who provide the vast majority of caregiving hours and perform crucial well-being services such as mobility assistance, personal interaction, and cleaning to minimize infection risk and ensure sanitary conditions. Overall staffing declines by 1.4%.

Gupta and his co-authors find it “puzzling” that nursing homes, which have low and regulated profit margins, make attractive targets for PE firms. Buyouts appear to have no effect on net income, which raises the questions of how the PE firms create value. The answer: financial engineering.

There are three types of expenditures that are particularly associated with PE profits and tax strategies: “monitoring fees” charged to portfolio companies, lease payments after real estate is sold to generate cash flows, and interest payments reflecting the importance of leverage in the PE business model. … We find that all three types of expenditures increase after buyouts, with interest
payments rising by over 300%. These results, along with the decline in nurse availability, suggest a systematic shift in operating costs away from patient care.

The last time the Joint Legislative Audit and Review Commission (JLARC) took a close look at Virginia’s nursing homes, I believe, was in 2000, when it concluded that Virginia’s Medicaid reimbursements were inconsistent with a high level of care. That still may be true today. After 20 years, it may be time for JLARC to take another look, and this time to expand the scope of its analysis to include ownership structure, staffing levels, and inspections.

This entry was posted in Health Care, Uncategorized and tagged James A. Bacon. Bookmark the permalink.