In 1993, the late, great Delegate Chip Woodrum of Roanoke introduced a bill, which was subsequently enacted into law, to hold the General Assembly fiscally accountable for any legislation it passed that would add to the Commonwealth’s prison population.  The statute has been tweaked several times since its original enactment, but the overall purpose remains the same: the General Assembly must provide a specific appropriation to cover a portion of the costs of housing any additional inmates resulting from the passage of a crime-related bill.  Around Capitol Square, any legislation meeting this criteria is known as a “Woodrum bill.” 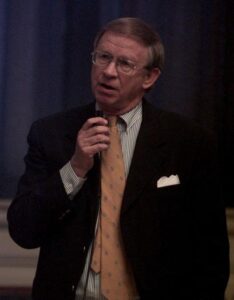 The statute directs the Virginia Criminal Sentencing Commission (subject of a future post) to prepare the fiscal impact statement.  In accordance with the law’s provisions, the Sentencing Commission staff project how many additional inmates would be housed in each of the succeeding six years as a result of the enactment of a proposed bill.  It then takes the highest of those six annual projections and multiplies it by the average annual cost of housing an inmate in prison (supplied by the Department of Planning and Budget) to determine the fiscal impact of the bill.  If there is insufficient data available to make a determination of a bill’s impact, a provision of the Appropriations Act requires that an impact of $50,000 be assigned.

The Code treats the fiscal impact of Woodrum bills differently than those for other bills.  First, there is a statutory requirement that there be a general fund appropriation for the impact.  Second, it requires that the fiscal impact be printed “on the face” of the bill (but not codified).  Thus, each Woodrum bill will have a separate enactment clause at the end setting out its fiscal impact.  And, finally, the law requires that any Woodrum bill appropriation be deposited into a special fund and “expended solely” for capital expenses of the Department of Corrections.

The following types of bills would qualify as Woodrum bills:

The statute has a comparable requirement for any bill that would result in an increase in the number of juveniles housed in the state’s juvenile offender facilities, but it is seldom activated.

The Sentencing Commission is well-suited to conduct these prison-bed impact analyses.  The Commission staff have extensive backgrounds and training in criminology and data analysis.  The Commission also has access to a large set of criminal incidence and sentencing data.   For anyone wonkish enough to be interested in criminal data details, she would do well to read the FIS prepared by the Sentencing Commission.  They often include data on the frequency of occurrence of the offense that is the subject of the bill.  The FIS footnotes also often contain details that shed light on the criminal justice system.

The Woodrum process has been effective in limiting the enactment of legislation expanding the criminal code.  First of all, all bills that would have a fiscal impact, including Woodrum bills, must run the gauntlet of two committees—the subject matter committee and the budget committee (Appropriations in the House and Finance and Appropriations in the Senate).  Second, the General  Assembly has been consistent over the years in complying with the Woodrum process.

Woodrum bills have been handled in past years somewhat differently in the two houses.  In the House of Delegates, the chairman of  the House Appropriations Committee lets the chairman of the Courts of Justice know how much total appropriation would be available for Woodrum bills. As the Courts of Justice Committee would hear the Woodrum bills during the session, it would set aside those it approved of generally (put in the “lock box” was the term used).  As the deadline for committees to report bills neared, the senior members of the Courts Committee would review the Woodrum bills in the “lock box” and choose the ones that it wanted to advance whose total Woodrum impact would be within the limit set by the Appropriations Committee.

In the Senate, the Courts of Justice Committee (now named the Committee on the Judiciary) would act on the Woodrum bills on their merits and then re-refer to the Finance Committee (now Finance and Appropriations) those it chose to report.  Like the House, the leadership of the Senate Finance Committee established the amount of appropriations available for Woodrum bills.  The Public Safety Subcommittee of Senate Finance then sorted through the  Woodrum bills referred to it and selected the bills to be reported whose total Woodrum impact did not exceed the limit it had been given.

Of course, all the committees involved are under new leadership and procedures and practices may change.  In the Senate, the chairmen of the relevant committees and subcommittees have been around for many years and, therefore, it is likely the procedure will not change much.  For the House, the situation is different; most of the committee and subcommittee chairmen are relatively new and have not been involved in the process in the past.  Therefore, it is too early to tell what changes in procedure, if any, will be made.

The limitation on the amount of Woodrum appropriation available made it doubly difficult for Woodrum bills to be passed.  Even the minimum impact of $50,000 (a small amount in terms of the overall budget) could doom a bill.  When a Woodrum impact was assigned to a bill, it was not uncommon for a patron to ask Sentencing Commission staff what changes to the bill could be made to reduce or eliminate the fiscal impact.  Because the fiscal impact was predicated on the bill resulting in more people being confined in prison, eliminating the impact would necessitate changing the bill so additional people did not go to prison.  An unasked question:  If the bill is not going to have an impact on criminal sentences, why introduce it?

This entry was posted in Finance (government), General Assembly and tagged Dick Hall-Sizemore. Bookmark the permalink.