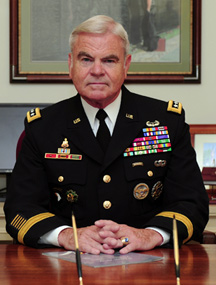 A  year and a half after he was forced into resigning amidst allegations of “relentless racism” at the institution he ran for 17 years, J.H. Binford Peay III, has been honored by the VMI Board of Visitors.

The board bestowed upon him the title of superintendent emeritus and ordered that a planned leadership building be named Peay Hall in his honor, and its dining room be named for his wife Pamela Peay. Further, General and Mrs. Peay will be honored at VMI’s Founders Day celebration Nov. 11. Superintendent Cedric T. Wins announced the recognitions at a class-of-1962 alumni reunion dinner April 26.

Stated the press release: “The Institute celebrated many successes during Peay’s 17 years as superintendent, including improved academic and co-curricular programs, major renovations of many buildings, and the construction of Third Barracks, Marshall Hall, and the Corps Physical Training Facility. During his tenure, the former superintendent was dedicated to an environment of excellence where cadets were provided countless opportunities to develop traits of successful leadership—honor, respect, civility, self-discipline, and professionalism.”

“He was a transformative leader,” says Carter Melton, who served on the VMI search committee that selected Peay. “He recreated VMI and led it into the 21st century. I think he might have been the finest superintendent VMI ever had.”

The Board’s recognition is significant, Melton says. VMI has named few, if any, buildings after living people. Melton can’t recall any previous superintendent being named superintendent emeritus. “It doesn’t get any better than that. It’s a huge and significant honor, a heartfelt recognition of the VMI family’s admiration for Binnie and Pam Peay…. This is our statement to the world that you can’t take a man of this caliber and treat him as shamelessly as Northam treated him.”

VMI’s 17-person board is comprised entirely of members who were appointed or reappointed by Northam.

Peay faced a balancing act upholding the military academy’s hallowed traditions such as the adversarial, character-building Rat Line and the single-sanction honor code at a time when social attitudes towards the Civil War and Confederate heroes were rapidly changing. For years the Institute had venerated Stonewall Jackson, a VMI instructor who became one of the most accomplished battlefield commanders in U.S. history.

In the wake of the George Floyd protests, Peay was trying to recalibrate that balance. But The Washington Post ignited a firestorm with a series of articles portraying VMI as a cauldron of racism and sexism. The Post cited several instances of racism that occurred at VMI over several years but never demonstrated that the incidents were systemic or that the Peay administration had tolerated racism. Governor Ralph Northam, a VMI graduate who was seeking to redeem himself after his infamous blackface scandal, seized upon VMI as a way to restore his credibility with “progressive” and Black legislators who were key to his political survival. Denouncing the “clear and appalling culture of structural racism” based on the WaPo articles, he ordered an investigation into the military academy and conveyed his lack of confidence in Peay, after which the General resigned.

Wins, Peay’s successor, faces a similar balancing act. Wins has said he has seen no evidence of “systemic” racism at VMI, and he has pledged to uphold core VMI traditions such as the Rat Line and Honor Code. However, VMI has removed the Stonewall Jackson statue and expunged any references to him in public memorials. Meanwhile, Wins is implementing a Diversity, Equity & Inclusion program that includes expanding DEI staff, providing DEI training to faculty and staff, and exposing cadets to DEI sessions in which participation is theoretically voluntary. Some VMI alumni charge that the DEI program is infused with Critical Race Theory (CRT) that will heighten racial identities in a way that is antithetical to VMI’s ideal based on character and service. VMI officials have adamantly denied that CRT plays any role at the institute.

One thing that both sides of the culture wars can agree upon, however, is that Peay’s legacy at VMI is worth honoring and preserving.

This entry was posted in Education (higher ed) and tagged James A. Bacon, Virginia Military Institute. Bookmark the permalink.