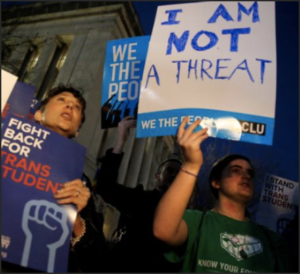 Attack the most vulnerable and say it’s for everybody. What could go wrong?

The so-called “parental rights” policies designed to force questioning teens to out themselves to their families would affect perhaps 4,000 students in Virginia, according to the Post.

Bringing it a little closer to home, that would work out statistically to about 25 students in Harrisonburg and 40 in Rockingham County.

But would it affect them all? If half the teens questioning their gender are able to talk to their families about what they’re feeling, then we’re left with a policy targeting fewer than three dozen families, county and city, affected by the coercive policy.

Trumpeting this as parental rights ignores that it is only creating those rights for a miniscule minority of parents, and that those are quite possibly, perhaps probably, the parents whose children may have the most to fear from them.
It’s hardly something the wielders of this latest wedge issue are doing for all parents. Rather it is something they are doing to a tiny and isolated group of teens who may already be feeling friendless.
In fairness, the policies would not necessarily force teens to out themselves. The policies could also force them to not talk to anyone at all about their doubts, concerns, feelings, decisions, or anxieties. In effect, the policies would tell the most vulnerable teens they can talk to their parents or to nobody, and if they can’t talk to their parents, Youngkin’s Education Department is telling them, then they can go find a closet.

Some people at Animal Farm have more rights than others.

There are those who will tell you this is not about creating a newer, more simplistic wedge to further inflame those already amped up about guns and abortions. Rather, it is about bathrooms. Remember when we were a nation concerned about war and peace, human rights, international relations, lifting people out of poverty, and educating children? There was a time in many of our lifetimes when those were some of the overwhelming issues, not to mention going to the moon and finding new ways to treat cancer.

It wasn’t a golden age by any means, but people who came of age in a time of a grifter president can be excused if they think half the political establishment has lost its mind. Several generations named for time periods or letters of the alphabet are growing up knowing they won’t have the long-term job security, pension benefits, advancement opportunities, or constantly improving education that for a period from WWII to Reagan were becoming norms. I can only imagine how they feel about bathroom bills at the highest level. I don’t need to imagine their shrugs and eye-rolls about what passes for policy discussions.

Many political leaders have convinced large groups of people that something is being taken away from them if the state doesn’t take enough control over the interactions of a few dozen children and their families. You almost have to admire their ability to blow this spark into a bonfire. Scouts have gotten badges for less, although in fairness they also have to tie a square knot.

My first job was as a gas station attendant. I’ve also been a newspaper reporter and editor. Those jobs have all but disappeared. Checkout clerks and truck drivers will follow. It would be good if the governor and his ilk could explain how to replace those tens of thousands of vanishing jobs instead of using the vast powers of government to victimize, demonize, or terrorize a few hundred of our most at-risk young people.

Joe Fitzgerald is a former mayor of Harrisonburg. This column has been republished with permission from Still Not Sleeping.

This entry was posted in LGBQT rights and tagged Joe Fitzgerald. Bookmark the permalink.