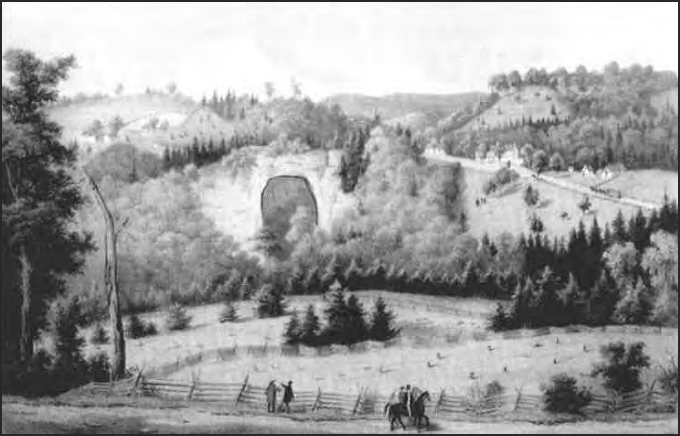 The Natural Bridge, as rendered by German artist Edward Meyer in 1858.

Virginia’s history is endlessly fascinating. A study of the state’s past illuminates many issues that still confound us today. Such is the case with a monograph that reader Kemp Dolliver has brought to my attention: “Thomas Jefferson, Patrick Henry, and the Natural Bridge of Virginia.”

This article, written in 1997 by David W. Coffey, then a history professor at the Virginia Military Institute, touches upon two issues that are relevant today: (1) the dispossession of the lands of the Monocan Indians; and (2) Jefferson’s attitude towards race.

Monocan Indians. The Monocan Indians, as we are repeatedly reminded, inhabited the territory now known as western Virginia during the pre-colonial era, and the land where the University of Virginia and Virginia Tech are located was taken from them. This history, usually told in a manner to suggest that the European settlers of Virginia were uniquely rapacious and unjust, is devoid of critical context.

Citing an earlier source, Coffey’s article notes that the Natural Bridge held a special place in the hearts of the Monocans. In their mythology, the geological wonder proved their salvation. “Long, long ago,” the Monocans were set upon by the Shawnees and the Powhatans. Many of the Monocan braves fell in battle. As they fled their pursuers, the Monocans came upon a high chasm. As they cried out for deliverance, the Great Spirit created the Great Bridge for them to cross. Then, standing against their enemies on the narrow crossing, the Monocan braves turned to face their enemies and fought victoriously.

History can be seen as an endless chain of injustices perpetrated by one group upon another. Only the modern-day heirs of Western Civilization are preoccupied with the misdeeds of their ancestors, even as they cast no judgment upon the atrocities, depredations and oppressions of non-Western cultures. We cannot roll back history and undo the past. But Virginians can acknowledge that we are no longer governed by the values and institutions of ancestors emerging from a feudal ethos, in which the surest path to riches was conquering and plundering the weak. We hew today to democracy, human rights and the rule of law.

Jefferson and Patrick Henry. Thomas Jefferson regarded the Natural Bridge as a natural wonder — “the most sublime of Nature’s works” — worth preserving. He acquired title to 157 acres of land around the Bridge, which he maintained at his expense as “a public trust.”

Rarely is Jefferson remembered for his early contribution to the conservation movement. Today, at the university he founded, he is far more often portrayed as a slave-holder and racist. Jefferson did espouse views that, by today’s standards, are racist. He believed in the intellectual inferiority of the Black race. That’s one yardstick by which to judge him — a valid yardstick as far as it goes. But there’s another yardstick: how did he actually treat Blacks, both slave and free?

As it turns out, the man to whom he entrusted the care and maintenance of the Natural Bridge property was one Patrick Henry — not the orator and Virginia governor but a “free man of color.” Coffey’s article tells the story of how Henry was born to a Westmoreland County slave and her owner, Martin Tapscott. Tapscott freed the mother, Lavinia, and intended to free his mulatto son Henry, but died before he could do so. Still, as a slave, Henry earned the $300 it took to purchase his freedom.

By 1815, Henry had moved to Lexington. He purchased and freed a slave woman, Louisa, and married her. William Caruthers, who handled Jefferson’s affairs in Rockbridge County, recommended in 1817 that Jefferson hire him as caretaker of the Natural Bridge property. Wrote Caruthers: “Patrick is a man of good behavior and as the neighbours are destroying your timber verry much it might not be amiss to authorize him to take care of it.” Jefferson hired him, and Henry built a cabin on the property.

Henry paid rent and taxes. But, Coffey writes, “Jefferson occasionally sent Henry some money to help pay his local taxes and as compensation for the extra laborers he had hired and for his work entertaining the frequent visitors whom Jefferson sent out to view his Bridge.” The arrangement was satisfactory to Henry. He lived there until he died in 1831.

The history of Virginia slavery was more complex than commonly portrayed. Slavery was, by today’s standards, an unquestionably evil institution. But by the standards of 1800, in which the vast majority of mankind existed in one condition of servitude or another, it was less inhumane than many. Manumission was common in the aftermath of the American Revolution when many embraced the Jeffersonian ideal that “all men are created equal.” While slave status was inherited, tens of thousands of slaves either earned or were given their freedom. In 1860, an estimated half million free Blacks — about 9% of all Black people living in the United States — were free.

Likewise, Jefferson was more complex than commonly portrayed. He was willing to entrust the caretaking of a “sublime” natural wonder to a mulatto freed man. Perhaps it could be said that in this instance the nation’s third president could look past the color of Henry’s skin and judge him by the content of his character.

This entry was posted in Virginia history and tagged James A. Bacon. Bookmark the permalink.