After an abysmal start in vaccinating its population, Virginia has risen to 10th best in the nation ranked by the percentage of COVID-19 vaccines that have been administered. According to the Beckers Hospital Review database, Virginia has given 68.7% of the vaccine doses supplied by the federal government.

I don’t know what kind of whip Northam applied to his health care bureaucrats since Virginia ranked 50th in the nation a couple of weeks ago, but something is working. The system for giving shots in the Old Dominion has relied primarily on hospitals and secondarily upon local health departments. Doctors’ offices, community health providers and pharmacies have been tertiary players in the effort.

The Northam strategy faces a new test, however, as the state prioritizes local health departments. In the past week, health departments have been supplied with 81,550 new “first” doses compared to only 16,650 for hospitals, according to the Virginia Department of Health vaccine dashboard. (The distribution of “second” doses has been more even.)

While some health departments have taken the lead in organizing local vaccination efforts, the rollout has varied in effectiveness. The success of Northam’s strategy will depend upon the ability of every local health department to pull its weight.

Data questions. As we track the effectiveness of the vaccination rollout, some basic questions arise about the Virginia Department of Health data. Here is the breakout of “first” does vaccines received and administered in Virginia.

How is it possible for medical practices to have administered 81,370 vaccines but to have received only 18,925? Where are primary care docs getting their doses?

How is it possible community health providers to have given 91,883 shots but to have received only 31,550? Where are clinics getting their doses?

Meanwhile, an update on cases… The number of confirmed cases in Virginia continues to spike, as seen in this VDH COVID dashboard chart: 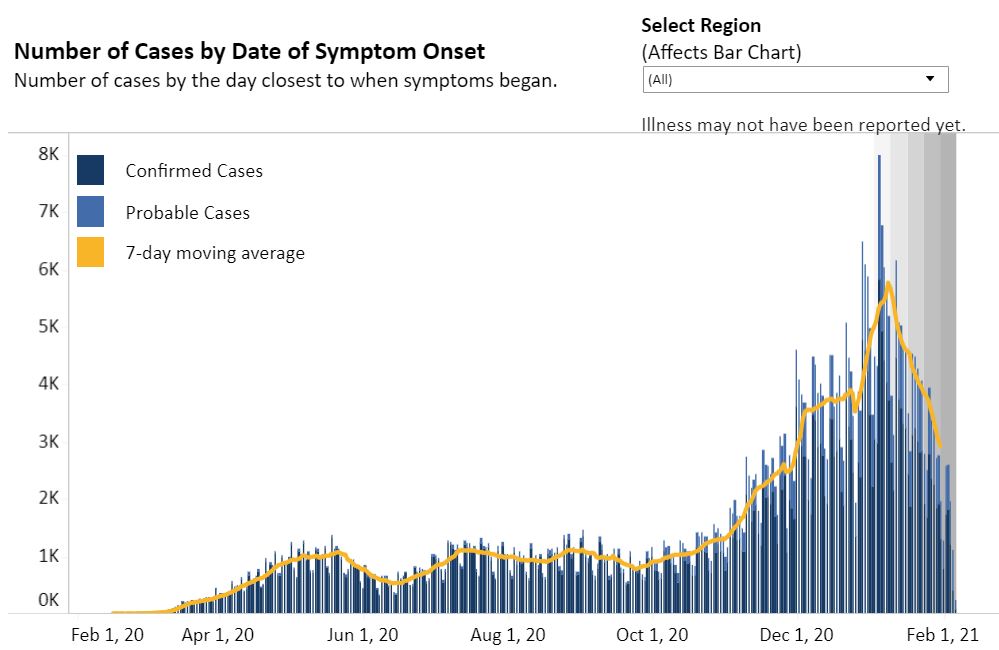 Ignore the gray zone. There is a time lag in the reporting of the data, and those numbers will increase as they are updated. If it feels like things are worse out there, that’s because they are.