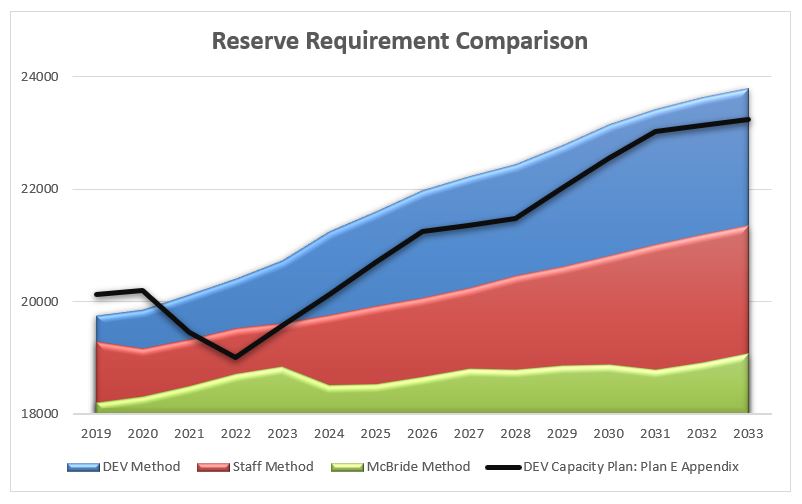 The gap between the amount of generation Dominion projects it will need by 2033, and what the SCC and an outside consultant project. It deals with thousand of megawatts of capacity. Source: SCC staff comments on Integrated Resource Plan case.

Virginia Secretary of Natural Resources Matthew Strickler told a legislative commission today the Governor will again ask the General Assembly to keep and spend the proceeds of a new electricity carbon tax, rather than find a way to return it to ratepayers.

Strickler pointed to Senate Bill 696 and its companion House Bill 1273, defeated by General Assembly Republicans on party-line votes, as models for what might come back in the 2019 session.  He estimated that once Virginia joins the Regional Greenhouse Gas Initiative (RGGI), and Virginia utilities are having to buy carbon credits at auction for their fossil fuel generation, it will generate $200 million per year.  The fiscal note on the failed bill estimates between $175 million and $208 million.

(Here’s an earlier discussion of RGGI on Bacon’s Rebellion, and here is the Richmond Times-Dispatch coverage of the meeting.)

The draft regulation pending at the Department of Environmental Quality would have the money paid to RGGI in the auctions eventually return to the utilities, after RGGI dips into the pot for its cut.  When former Governor Terrence McAuliffe started the regulatory process in 2016 he said the money would come back as credits to ratepayers and in effect create a shell game with little final cost.

The bottom line of the briefing before the Manufacturing Development Commission was all talk of money is just speculation until DEQ and the Air Pollution Control Board release the final regulation, and no details on that were reported.  The draft sparked 7,500 written comments and the Air Board can amend it before it takes a final vote.  Strickler predicted release of that in early December.

With all the other electricity rate increases barreling toward Virginians because of recent state legislation – building new solar and wind, a major effort to place residential lines underground, a massive roll out of smart metering and other grid improvements – it is easy to dismiss the cost of RGGI fees as a rounding error.  But $200 million more piled on annually will make a difference if the money is spent on other things the state wants, or somehow is retained by the utilities – which is very possible.  Some of that will be paid by customers of Appalachian Power or other smaller generators.

The State Corporation Commission staff told the commission that any cost estimate will depend on the actual CO2 emission targets set for Virginia by RGGI.  The starting point from which you measure the planned 3 percent annual reductions will matter.  Greg Abbott of the SCC staff said it is possible the utility could have an easy time meeting early goals and make a profit on the effort.  Just what happens to those dollars once RGGI sends them back to Virginia is not spelled out in the law and may depend on how the utilities treat the money in their own accounting.

The issue is also tied up in the SCC’s review of the Dominion Energy Virginia integrated resource plan.  Several of Dominion’s proposed capital plans assume a need to comply with RGGI and assign a cost.  But the SCC and others are challenging a key assumption behind those projections – the growth in demand for electricity from Dominion customers.  Slower growth makes meeting the RGGI goals easier and cheaper.

A chart from the SCC testimony in that case illustrates how its projections vary is at the top of this post.  An outside consultant to the SCC, Robert McBride of DrillingInfo Inc., believes Dominion will need less generation in 2033 than it currently has.

For its part, Dominion today provided absolutely no details at all on the cost or policy implications of RGGI, not even what it has included in the IRP.  It turned up with a short slide set to show how low its rates already are in comparison to other states, and tell how it helps low income customers.

Senator Frank Wagner, R-Virginia Beach, chair of this Commission and obviously still a RGGI skeptic, indicated he may call everybody back before his Joint Commission on Administrative Rules, which has statutory authority to challenge pending regulations.  Wagner questioned the need for RGGI membership, pointing to his own 2018 bill which authorized up to 5,000 MW of new renewable generation.

If that gets built, he asked Strickler, doesn’t that more than meet any carbon reduction goals RGGI might set?  So why join RGGI and layer on the carbon tax costs?   Strickler zeroed in on “if” and pointed out that the legislation did not actually order construction of those assets.  Joining RGGI sets a goal that creates more pressure to build them, he argued.

This entry was posted in Energy, Environment, Taxes and tagged Stephen D. Haner. Bookmark the permalink.