No, Your Middle Schooler Doesn’t HAVE to Get the HPV Vaccine 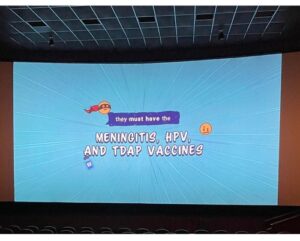 They were settled in their seats when a disturbing image appeared on the screen.

The movie wasn’t offensive. But a public service announcement from the Virginia Department of Health was. It told the audience that a vaccine against HPV — the human papillomavirus — was required for entry into Virginia middle schools.

Trouble is, that’s deceptive. While that vaccine against a common STD is listed with the mandates, parents can decide if they want their child to receive it.

Effective July 1, 2021, a complete series of 2 doses of HPV vaccine is required for students entering the 7th grade. The first dose shall be administered before the child enters the 7th grade. After reviewing educational materials approved by the Board of Health, the parent or guardian, at the parent’s or guardian’s sole discretion, may elect for the child not to receive the HPV vaccine.

It’s confusing, but surely the VDH understands. A careful reading of the rule states that parents can opt their children out of the vaccine without giving a reason.

The mandate was first introduced back in 2007 by then-Delegate Phil Hamilton of Newport News at the behest of the pharmaceutical industry. Of course. Hamilton was convicted four years later in federal court of bribery and extortion in a matter involving ODU and unrelated to this. He was sentenced to 9 1/2 years in the federal pen and released in 2019.

The vaccine was controversial from the start. After all, it involves vaccinating 11 and 12-year-olds against a sexually transmitted disease. Plus, the drug company making the vax and pushing states to mandate it was paying off a huge legal settlement for a bad drug it had released in 1999.

I wrote against Hamilton’s bill at the time, calling it the “Merck Mandate.” It was no coincidence that Merck was in the process of settling a massive $4.8 billion lawsuit over the painkiller Vioxx that caused heart attacks and strokes at the same time Hamilton was pushing the mandate.

No wonder the drug company was trying to get states to force its expensive shots on children.

Virginia remains just one of three states to “require” the vax. The others, according to Anderson, are Hawaii and Rhode Island and the District of Columbia.

Anderson immediately fired off a letter to the Virginia Department of Health that protested the misleading announcement and contacted the governor’s office. 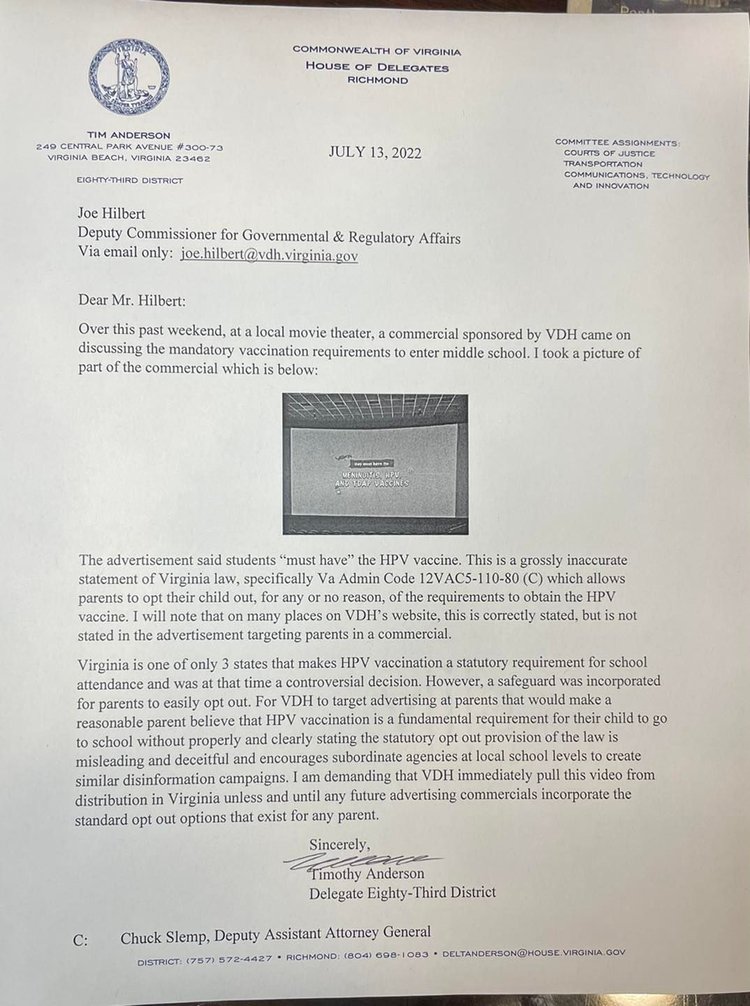 Youngkin’s staff was quick to respond and ordered the VDH to remove the announcement from movie screens.

On Tuesday morning, Anderson came into the WNIS studio to talk about the misinformation that entrenched bureaucrats at VDH and some school officials continue to spread.

I asked Anderson how he knew the so-called mandate had a big opt-out loophole.

“About three years ago I represented parents who were objecting when their middle school insisted they couldn’t opt out,” he recalled.

That was a Virginia Beach school, by the way, lying to the parents.

“Look, I don’t want to be the guy telling people whether they should or should not get their kids vaccinated against HPV,” Anderson said. “I think it should be up to families and their doctors.”

That winning message – parental rights – is what got Youngkin elected.

If anything good came out of our covid nightmare it’s a healthy distrust of both public health and school officials. One thing they have in common: They love mandates and loathe parents who question authority.

If you catch officials lying about the HPV vaccine, call them out.

This entry was posted in Children and families, Education (K-12), Public safety & health and tagged Kerry Dougherty. Bookmark the permalink.