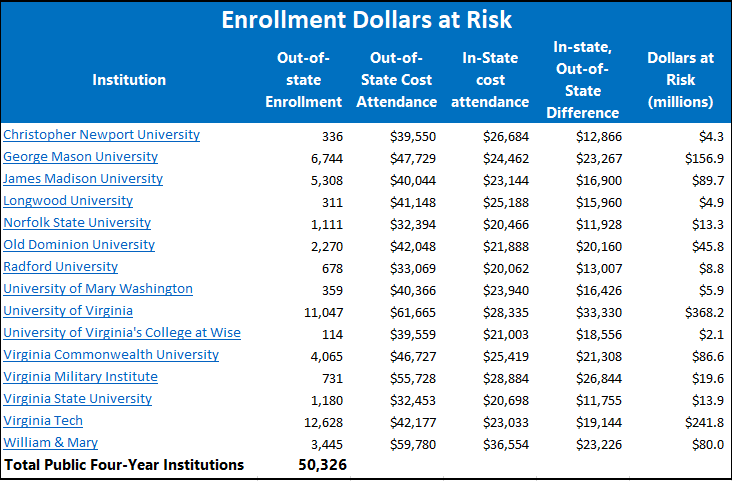 Several days ago, Juan Espinoza, director of undergraduate admissions at Virginia Tech, emailed his counterparts at Virginia’s other public four-year colleges and universities to inform them that Tech was having difficulty meeting its enrollment objectives. After U.S. higher-ed institutions sent students home during the COVID-19 epidemic this spring, families were having second thoughts about sending their children back to college this fall — and paying big dollars for the privilege of possibly seeing them sent home again. Overseas students were particularly problematic.

At the point at which Espinoza dispatched his missive, Tech had received deposits from only 150 students, well short of its target of 550. Tech might have to close the gap, Espinoza warned, by offering seats to 950 in-state students on its waiting list, reports Jeff Schapiro in the Richmond Times-Dispatch.

As the old saying goes, fecal matter slides down the gravitational plane — or something like that. If Tech, one of the state’s most prestigious higher-ed institutions, admitted more in-state students, Tech’s in-state competitors would be adversely affected.

For higher-ed in the modern era, the COVID-19 epidemic is an unprecedented event, and there is no experience to draw upon to forecast what the enrollment impact might be. All we can tell with any level of confidence is how many revenue dollars are at risk. In the table above, I show one way of calculating the revenue from out-of-state enrollment that is now in play.

Here’s what you’re looking at:

Out-of-state enrollment: This column shows the out-of-state-enrollment at each of Virginia’s four-year public institutions. The figure includes undergraduate, graduate and professional enrollment, based on State Council of Higher Education for Virginia (SCHEV) data, for the year 2018-19. I used this year because this is the most recent included in the SCHEV statistics dashboard.

Out-of-State cost of attendance. This column shows the published cost of undergraduate education, including tuition, fees, room and board in the 2019-20 school year. It understates actual charges because graduate and professional tuition is almost always higher. Therefore, this number also understates the out-of-state dollars at stake.

In-State, Out-of-State difference. This column expresses the difference (not adjusted for financial aid) between the published cost of attendance for in-state and out-of-state students.

Dollars at risk. The operating assumption here is that if institutions see a decline in out-of-state enrollment, they won’t just take it on the chin, they will increase in-state enrollment to compensate — just like Virginia Tech has indicated it will do. In this column I have multiplied the number of out-of-state students by the Cost of Attendance differential in the previous column.

Add up all the dollars at risk, and it amounts to more than $1.1 billion for Virginia’s four-year public institutions.

These are dollars at risk, not the expected loss of revenue. Virginia’s colleges and universities will continue to enroll out-of-state students, just in lower numbers. But institutions will likely lose some portion of these “at risk” dollars. What this table shows is potential exposure to lost revenue from a decline in out-of-state students. (It does not include lost revenue from a decline in in-state students, which requires a different set of calculations.) As data on college selections comes rolling in, Virginia institutions will get a clearer idea of how much of this revenue will actually evaporate.

The counter-intuitive finding here is that Virginia’s most prestigious institutions may be at greatest risk of revenue loss because they are the very same institutions with the greatest number of 0ut-of-state students. Thus Virginia Tech, with 12,600 students enrolled two years ago, has $240 million in revenue dollars at risk. (If I had had more time this morning, I would have calculated that number as a percentage of each institution’s total tuition/fees/room/board revenue, but there’s only so much I can do in one morning.) The University of Virginia has even more dollars at risk — $368 million, a truly massive sum.

It is dangerous to extrapolate too much from Virginia Tech’s experience with foreign students, however. Conceivably, foreign students are more sensitive than out-of-state American students to the travel restrictions and general fears and phobias resulting from COVID-19. Foreign students may not be representative of out-of-state students as a whole. On the other hand, given the devastating impact of the COVID-19 shutdowns on the economy, jobs, incomes, and stock market wealth, many U.S. parents might opt to send their children to in-state schools with a lower cost of attendance. (Of course, that logic applies to Virginia parents, who might repatriate their children back to in-state schools.)

Also, those most like to change their calculus of which institution to attend are entering students. Rising sophomores, juniors, seniors and graduate students, once committed to an institution, are more likely to stick with it regardless of the tuition and regardless of the risk of a canceled semester.

We just don’t know what will happen. There are too many variables for which previous experience provides no guide. The boards of visitors of Virginia higher-ed institutions will have many imponderables to consider as they chart the path ahead for their institutions.

Update: According to the National Association of Scholars, the American Council on Education projected on April 9 an enrollment decline of 15% for fall 2020, including a 25% decline in international students —  a $23 billion revenue loss for U.S. institutions.