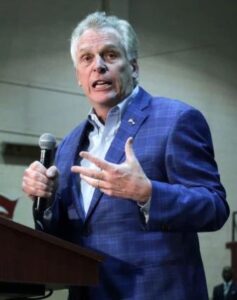 Here’s how you know Terry McAuliffe now thinks the Republican to beat in the race for governor this fall is no longer Amanda Chase, but Kirk Cox: He’s shifted the animus of his race-mongering fund-raising emails from the one to the other.

“I will never stop fighting for the right to vote,” he proclaimed in a missive today. Extremists in the Republican Party are trying to “out-Trump” each other by “rolling out more racist, restrictive plans to curtail voting.”

Recently Kirk Cox said we need to focus on “election integrity” in “tough precincts.” Cut the BS, Kirk, We know what’s going on. You want to curtail the constitutional rights of Black and Brown Virginians.”

In McAuliffe’s previous emails, Sen. Amanda Chase, R-Chesterfield, Trump acolyte and chief bogey man (or am I required to say “bogey woman” these days?) served as the favored punching bag. But now that her campaign is fading, McAuliffe has aimed his sights on Cox. (He did give Chase a parting jab, though, saying he would stand up to her, Cox, or anyone else who “tries to create barriers between Virginians and the ballot box.”)

And what has that segregationist throwback Cox proposed? The McAuliffe email was quoting from this article in The Virginia Mercury:

Del. Kirk Cox, R-Colonial Heights, is the only candidate in the race who has said he believes Biden won the election legitimately. But like his opponents, he says he’d support an array of new voting restrictions, recently voicing support for new voting rules adopted in Georgia, which drew nationwide condemnation from Democrats and some major corporations. Speaking at the Princess Anne Republican Women’s Club, he also promised to create an “election integrity operation” that he said would target certain precincts for extra scrutiny.

McAuliffe apparently hasn’t gotten the message that the mainstream media’s portrayal of the Georgia election law as a revival of Jim Crow is… how do I say this politely? … a heaping, steaming, pack of lies. (When The Washington Post gives President Biden “four Pinocchios” for claiming the Georgia law restricted voting, you know your narrative is in trouble.)

Another tip-off from T-Mac fund-raising letter is that he feels intense pressure from his left flank, as former Prince William Jennifer Carroll Foy, an African American, gains ground on him. Going full “racist, racist, racist” in his emails is scorched earth politics. That’s no way to win a general election. It means he’s more worried about winning the nomination.

By contrast, Foy is running on her legislative record as a champion of “hardworking families” and “marginalized people” in expanding Medicaid and fighting special interests like Dominion Energy. One doesn’t have to agree with her policy prescriptions to respect her approach to campaigning.

I don’t think the shift in tactics will work. McAuliffe will find it a lot harder to campaign against Cox than Chase.  Chase, who said and did crazy stuff, is an easy target. Cox, who is white bread, is not. The general electorate won’t believe he’s racist. McAuliffe’s campaign surely must be stalling.