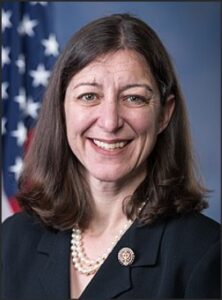 I’ve seen some wacky political slogans in the past: “Be Best” was inane, “Build Back Better” was worse, especially considering the mess Joe Biden’s created in just 17 months.

But the most laughable? Elaine Luria’s unofficial campaign mantra as she runs for re-election to Congress:

Here’s how The Washington Post reported her curious stand in one of its typical Democrat-valentines last week:

…the former Navy commander has said she is unconcerned about any potential political consequences that her role in unspooling the former president’s inaction on Jan. 6 could have in her own political future — a message that, rather than whispered to confidants, she has put front and center in her campaign.

“Getting this right, getting the facts out there and making some change in the future so that this doesn’t happen again, it’s so much bigger than whether you’re reelected or not,” Luria said in an interview.

For the second time in a year, Virginia voters are being asked to vote for someone who’s stuck in the past.

Terry McAuliffe was widely considered to be a lock for governor last year. Why else would the Democrats have elbowed several promising African-American hopefuls out of the way to give the old white retread the nomination?

But McAuliffe foolishly made his campaign all Trump, all the time. If I’d started an actual, instead of a virtual, campaign-long drinking game — taking a shot every time McAuliffe invoked the former president — I’d be on a liver-transplant list right now.

Luria is doing the same thing.

Instead of looking to the future, telling voters in the 2nd District what she’ll support to get inflation under control, to permanently lower gas prices and stem the flood of illegal immigration on our southern border, Luria’s fixated on Trump and his actions — and lack of actions — on January 6th, 2021.

You know, issues that matter to those looking ahead instead of backward.

No doubt Luria will be showered with donations from left-wing fat cats in New York and California who were dazzled by her prime-time performance on the January 6th committee show on Thursday.

But on November 8th we’ll find out if the 2nd District — like Luria — is consumed with the past. Or more concerned with the future and the future of their kids.

We know what happened when voters had the choice of a forward-looking Glenn Youngkin or a dour, Trump-obsessed McAuliffe.

Given that, perhaps Luria’s unofficial “I don’t care if I win” slogan is perfect.

This entry was posted in Elections, Politics and tagged Kerry Dougherty. Bookmark the permalink.