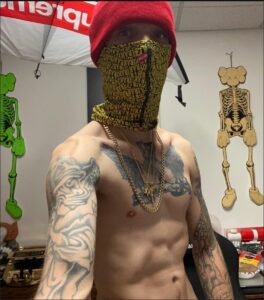 There is a disturbing sidebar to the University of Virginia mass shooting  story. Only a few hours before the murders took place at around 10:30 p.m. on Nov. 12, a rapper and minor social media celebrity, Bryan Silva, posted a disturbing message on his Facebook account:

According to one media account, a Facebook reader alerted the Charlottesville police to his comment. According to another, he threatened a neighbor with a gun; the neighbor called the police. Whatever the case, police opened an investigation, obtained a search warrant of Silva’s downtown residence, and arrested him for illegal possession of firearms and a controlled substance.

Despite the coincidence in timing, police quickly concluded that Silva’s vague threats were unrelated to the tragic shooting of three UVa football players, allegedly by UVa student Christopher Darnell Jones Jr. Media attention has focused on uncovering Jones’ background and possible motive. Understandably, Silva, whose crimes were trivial by comparison, has faded into the background. But I find Silva intriguing… and scary. Not because he represents a clear and present danger to society — although he might — but because he epitomizes so much that is tragically wrong with so many young men in our society today.

To peruse his social media postings — Facebook, YouTube, Tiktok, Instagram — is to plunge into a bizarro world at the intersection of gangsta rap, a fixation with guns, drug use, confused sexuality, self-preening narcissism, and a life lived through social media. Silva appears to be a loner, appearing solo in almost all of his posts. From what I saw from a few dozen posts (he has made hundreds of them), he never refers to family, and rarely to friends or acquaintances, but only to the followers of his videos and posts.

Silva, who is reportedly 31 years old and has an extensive background of mostly minor criminality, grew up in Florida and spent time in Orange County, Calif., before ending up in Charlottesville. In my brief dive into Silva World, I could not determine why he came to Virginia or how long he has been here.

Perhaps most striking to someone like me who is new to his social media postings is how impressed Silva is by his own physique. He posts innumerable photos and short videos highlighting his sixpack abs and well-defined biceps. He refers to himself as a “personal trainer by day,” and for someone who is thin to the point of emaciation he does seem fairly muscular. Remarkably, his social media accounts indicate that his followers number in the tens of thousands. I find it incomprehensible that there is such a large appetite for the content he produces.

It’s hard to imagine that Silva’s ability as a rapper would explain his notoriety. I know next to nothing about rap music, especially the gangsta rap he aspires to, but his offerings strike me as second rate. Rather, I expect his appeal is the audacious — one might say pathetic — efforts as a White man to imitate Black gangstas. His claim to fame is the supposed invention and popularizing of the phrase “gratata,” an onomatopoeic reference to the sound of repeated gunfire. One of his posts shows a Black rapper supposedly using the term. Like gangsta rappers, he seems unable to express himself without the use of profanity, and like his idols, he refers to women in the grossest of misogynistic terms. However, his sexuality is ambiguous. One image shows a slutty looking woman draped all over him. Others display him graphically engaging in homosexual sex.

Silva smokes reefer, adorns his body with tattoos and wears low-slung pants that reveal his Abercrombie and Fitch underwear. I have no idea how he makes a living. Perhaps he actually is a personal trainer. Perhaps he has figured out how to monetize his Youtube videos.

I have not delved into his entire “oeuvre,” so there is much about Silva that I don’t know. I will fully admit that my impressions are superficial, based upon images he has projected to the world in the past few weeks. Perhaps there is a deeper, more talented, more sensitive soul in that shirtless, tattooed body — one not captured by his inarticulate public utterings. If so, I apologize to that person. But Silva strikes me as a lost soul: adrift, unconnected, wandering from place to place in search of something missing in his life but never finding it. He appears to live in a metaverse-like world in which his most meaningful human interactions are digital.

Could Silva pose a danger to others? Let’s just say this: he comes across as a deeply alienated loner with a gun fixation and a sense of grievance. How many tens of thousands of other young men just like him are living in the shadows?